No complaints: Holystone vs Volker Stevin

Here’s a court case of an adjudication that went to enforcement, in which all four arguments a party used in its defence were defeated …

The drainage works at Smiths Dock in North Shields was a fair size subcontract. Volker Stevin, the major international civil engineering main contractor, engaged Holystone Contracts, the long-established road and sewer contractor, under the NEC3 subcontract. Four months into the drain laying Volker terminated the subcontract, much to Holystone’s dismay. It called for an adjudicator who decided, no doubt creating more dismay to Holystone, that Volker was right to terminate. Adjudicator two now came along at Volker’s request to decide the level of loss because Holystone said Volker’s calculation under NEC3 for compensation was too high. In the event he said £561,993 should be paid by Holystone. But the firm baulked. The parties came to the High Court on enforcement.

The idea of adjudication is to do broad justice within a tight timetable. If a load of new stuff keeps on being hurled at the adjudicator, even broad justice goes out the window

So, what’s the problem with new material coming in part way through the adjudication? Fairness, that’s what. The whole idea of adjudication is to do broad justice between the parties within a tight timetable. And if a load of new stuff keeps on being hurled at the adjudicator, and he is running out of time, even broad justice goes out the window. It wouldn’t surprise me if Holystone felt under pressure in trying to find answers. The duty on the adjudicator is to do his best to see that the process is fair. In this context, fairness means ensuring enough time to comment on the new material or questions put by the adjudicator. Holystone didn’t complain at the time so, said the judge, it can’t complain now. 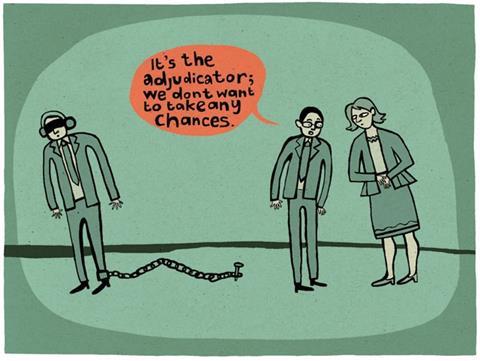 “It’s the adjudicator; we don’t want to take any chances”

Point two was that Volker’s claim for £667,000 was changed mid-adjudication to a different figure. The judge recognised that such changes are inevitable once argument begins to flow to and fro. So nobody can complain. I dare say that changes of this type are a matter of degree. If a change drives the other party to begin an inquiry with the building team it could cause yet more panic and soak up time. Meanwhile, the adjudicator has to sit on his hands. The judge said Holystone had no real complaint here.

Point three happens in adjudications periodically. Prior to the second adjudication, there had been meetings between Volker and Holystone to attempt to reach a compromise. Those meetings were “without prejudice”. This means that what is said in these events is not to reach the eyes or ears of the adjudicator. He is to come to the arguments afresh. In this adjudication, Holystone included in its documents information about the private meetings. It was a mistake to put this in front of the adjudicator. He was asked to resign, since he may be influenced by the offers of money to settle. It was argued that the test for bias was satisfied. Put simply, it asks if these circumstances would lead a fair-minded observer to conclude that there is a real possibility or danger that the adjudicator would favour or disfavour a party. The adjudicator dealt with the problem well. He reassured the parties that none of his decisions had been influenced by the letters. In any case, offers come as no surprise to anyone, especially since adjudication number one had decided liability and adjudication, two was about the money consequences only. So Holystone could not complain of bias.

As to the contention that enforcing the payment would push Holystone into liquidation, a plea of poverty is irrelevant to enforcing an adjudicator’s decision. Mind you, it might have impressed the court if Holystone had by now started an arbitration on the question in adjudication number one, whether Volker was entitled to terminate the subcontract. An arbitrator worth his salt could decide that in 28 days flat. Who knows, it might reverse the adjudication. And who knows what that would do to the amount awarded by the second adjudicator.