Construction costs, share prices and mergers are just some of the subjects tackled in this week’s round-up. Who says I can’t be serious?

Chief construction adviser Paul Morrell was the main speaker at Building’s annual terrace reception at the Houses of Parliament on Monday, where he outlined his plan to knock 20% off building costs. But guests were not expecting him to personalise his quest the way he did - Morrell pledged to lose 15-20% of his body weight “over the life of the parliament”, to prove that things that were leaner could be “more beautiful”. A few glasses of chardonnay later, Rudi Klein, director of SEC Group, Nick Taylor, chief executive of Waterman Group, and Dominic Helps, consultant at Corbett & Co, made the same pledge. Any other takers?

David Pretty, former chief executive of Barratt, had a send off last week to mark his retirement from the New Homes Marketing Board - and the industry. His leaving do at the Mayfair Hotel was a chance for him to tell a few stories, mostly about the day he sold a home to Margaret Thatcher. He said the message from his boss, the infamous Sir Lawrie Barratt, on that day was: “Don’t screw up, David.” Pretty couldn’t resist a final swipe at his old firm, reminding everyone of Barratt’s share price the day he left: nearly £13. It is now hovering at about £1. Unfortunately his successor, Mark Clare, was unable to be there to hear it.

How clean is your site?

Here at Building Towers I am uniquely placed for a bit of lunchtime people watching: office workers jogging along the Thames, couples walking hand-in-hand in the unseasonable rain - and workers on the Blackfriars station overspill site hurling leftover poles and rubbish into surrounding bushes. It’s an interesting tidying-up method on the site, run by Balfour Beatty subcontractors. They even used a crane to dump a metal cage into the foliage. The area now looks like a kind of post-Glastonbury wasteland. But credit where it’s due: before the workers left last week, they were kind enough to remove one item - a football lodged in the bushes. Balfour Beatty promises to “take appropriate measures” to deal with the mess.

Clean up on aisle 4

Consider the worst thing that’s happened to you in a supermarket. They’ve run out of Coco Pops? The queue for the till is winding past the cheese counter? Surely, not a fridge exploding? A chap from Asda claimed at UBM’s Supermarket Conference in London last week that two of its rivals had problems with the new eco-friendly fridges they’d installed - namely, that they had been known to explode. Building is unable to verify the claim, but next time you pop to your local for some milk it might be wise to use a long pole with a hook on the end.

With plenty of fanfare, Rider Levett Bucknall announced earlier in the month a “powerful new FM partnership” with facilities management firm Agents4FM. “The combined resources and expertise of the two companies provides an attractive proposition for clients, utilising more than 2,500 people in more than 100 offices,” it boasted. So how many people will Agents4FM contribute to this global coalition? Er, just 10. It seems that firm only has £22,524 of net current assets. What RLB also didn’t mention was that it had taken out a minority stake in the diminutive FM outfit. Has there been such a lopsided partnership since Cameron and Clegg? 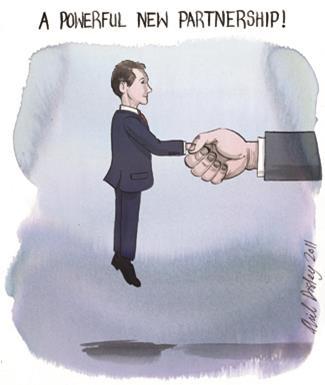