We’ve done it all before

I read with interest the article in Building on Friday by Paul Morrell titled making a Virtue of Necessity and what struck me from his message most of all was that we’ve done all what he’s looking for before!

The essence of the message I get from him and the cabinet office document ’Government Construction Strategy’ is for change through liked minded individuals, companies groups and organisations. Yes we need an educated client with consistent application and yes we need an integrated proposition from the industry too.

And here’s my experience – it’s all been done before in the private sector!

Who and how? With Bovis Construction (as then) and M & S.

When? Way back on 13th December 1945 at Stepney Green is when it all began… we never learn do we?

How did it work? Simple really…

The client had a need to build new stores to expand after the war and it integrated Bovis along with the professional team to do just this.

The client had an expansion programme that Bovis worked with, so it new in advance what was being built and where so resources could be planned and managed
A select supply chain was established so buying power could be used, preferred rates/prices and/or schedules of rates were set up across the country.

You knew if you were working on a store in Epsom that a “Truro” pelmet detail meant that it was the same detail that had been used at the Truro store.

The contracts were simple, Bovis was paid a fee for its management skills and expertise, the supply chain prices were transparent through to the client too.

At the outset of the project an estimate of prime cost was established with Bovis and the consultant qs and you worked together as a team to make it work - on the same side with the same objectives.

The contract to the subcontractors were two sides of paper - the thing that nobody liked on it was the infamous pay when paid clause - but that’s now outlawed isn’t it?
And it worked because everyone trusted each other throughout the entire process.

So here you are Mr Morrell here’s the blue print for your strategy – it’s a document called “the building process – a case study from Marks and Spencer Limited” published in 1970 you’ll have to get hold of it from the national archives mind.

It is the forward looking methods employed, the enlightened manner in which primary and secondary objectives are defined, the effective co-ordination of multi-disciplinary skills and attitudes and the mutual trust and respect created by the relationship enshrined in the Marks and Spencer/Bovis method of procedure that some future improvements in the general management of building should be sought…

The case study highlights the fact that Marks & Spencer over the years consistently have simplified procedures by reducing the amount of paperwork employed and in consequence the company has placed increasing reliance upon direct personal contact and individual responsibility. The combined effect of these twin objectives has been to create a real feeling of belonging to the Marks & Spencer organisation whether the individuals concerned are directly or indirectly employed.

The long and close relationship between the staffs of Marks & Spencer, their professional design teams, of Bovis and of various specialist sub-contractors must have contributed in large measure to the success story recounted in the bulletin and in particular to the recent development and application of computer techniques to location billing, material scheduling, manpower planning, expenditure control and the monitoring of progress.

I found my copy of a commemorative brochure produced by Bovis in 1970 to celebrate the long working relationship, and for these quotes. It is also the source of the pictures and quotes….couldn’t find anything online at Building!

So…it’s been done before… and it worked!

P. S. The document produced by Bovis is a fascinating read and if they let me I’ll try and make it available online, its quite a story! 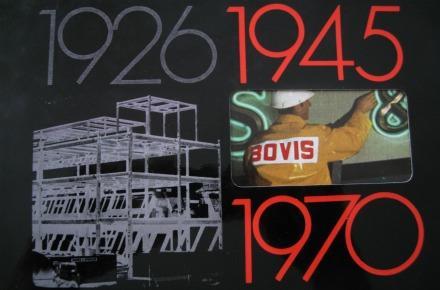