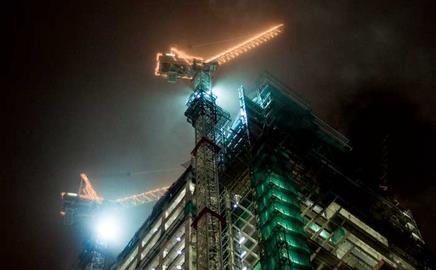 Sweden’s biggest contractor has been in the UK market for 10 years. During that time it has pulled off some remarkable jobs, but now it seems to be running into difficulties finding work

Britain has had a long romance with all things Swedish. From the sleek lines of their affordable kitchens to the sophistication of their football managers and the reliability of their cars, the Swedish brand has represented a peculiarly friendly kind of modernity.

That aura even extended to Skanska, the sixth largest contractor in Europe, and a force to be reckoned with in the UK industry: this was the contractor that built the Gherkin. It is still in work: the Heron Tower in the east of the City (pictured) has just topped out and work is still under way on the £1bn Barts hospital. But further down the line, things are looking a little bare; so bare that Mike Putnam, Skanska UK’s president, sent a memo to his building staff on 6 January warning them that turnover would fall in 2010, with all that that implied. “I am sure I can rely on your support as we seek to secure new profitable business which will minimise the number of redundancies necessary,” he said.

Putnam, previously head of civils at the firm, became president of Skanska UK in October last year. The previous incumbent was Mats Williamson, who was parachuted in by the Swedish parent to deal with a £41.5m loss, largely the result of two east Midlands hospitals that went wrong. A year before that, David Fison was in charge, having taken over from Keith Clarke in 2002.

You can see how this game of executive musical chairs would get confusing, and one manager complains that “we’ve had so many changes in leadership we’re constantly looking for the next announcement. It’s a nightmare. I don’t even know if this one’s permanent”. According to Putnam, it is. And judging from actions so far, he means business: as well as the announcement of impending redundancies in the memo, the firm froze pay and announced that it was replacing its final salary pension scheme with a cheaper average salary one.

As the memo made clear, the cause of this is the lack of work coming in. One staffer says the atmosphere at Skanska is “awful. We’re not winning jobs despite chasing so many. I don’t know why”.

One problem is that the firm is trying to target Building Schools for the Future (BSF) work at the same time as most of the rest of the industry is doing the same. And although a project win can bring a huge amount of work, they are expensive to bid for. Last year, it lost out to Kier on a £477m deal in Kent, which one source said “seriously hurt”. In fact, Skanska has won only one of the four bids it has made so far, a £100m deal in Bristol.

A source at a rival foreign contractor said: “Missing out has cost them. Apparently it was around £6m they lost on the Kent deal, which sounds credible. I’ve no doubt that the new chief exec has been looking at that problem.” Skanska staff now nervously await the result of the Essex BSF, for which it is shortlisted alongside Carillion. The announcement is due to be made on 1 February, and Putnam is eager to chalk up a victory after his team spent four years working on it.

“It’s one that we would dearly love to win,” he says, “but it’s like all these things: you bid a certain number and you expect to win a certain number. Clearly if we do win it helps us find jobs. But with PFI and PPP I’m not so concerned. We are selective in our bidding and we’re preferred bidder on two prisons, which gives us quite a good bit of continuity.”

The atmosphere is awful. We’re not winning jobs despite chasing so many. I don’t know why
Source at Skanska

He adds that Skanska will stick with BSF (although he wants to improve its win ratio), but that is a long-term strategy. In the short term, things are more problematic. As well as the £500m Heron Tower (which began on site in April 2008 and is due to open for business in a year’s time), it is working on the £150m St Botolph’s office development in Aldgate, London. But beyond that there is little to celebrate, especially after coming second to Mace on Park House, a £120m mixed-used development in Oxford Street in the West End. A rival contractor says: “Even if they do win a deal, it’s a pipeline of years. If he wants staff to start winning short-term work, say from the commercial sector, I’m not sure where that’s going to come from. It’s not easy to find work today that starts tomorrow. Having said that, I’m not worried about them: they’re a bloody good outfit.”

This confidence is largely owing to Skanska’s performance in the civils market, where it has been winning work such as the £83.7m PFI street-lighting deal in Surrey (beating Balfour Beatty) and the project to widen the M25. Another source added that Skanska had picked up an M&E deal worth £54m at the Olympic Park press centre, although the firm and the client are keeping tight-lipped about that.

Although this will tide the company over, it also needs to start winning building work if it is to keep its teams together and really establish itself in the British construction market. And that’s part of the problem: despite its successes, Skanska is still a recent entrant on the UK market (it bought Kvaerner’s construction business in 2000). As another rival explains: “Skanska have been very close to winning jobs like Park House. But Land Securities, or someone like that, use Bovis, Mace and Robert McAlpine. They might talk to Skanska and Laing O’Rourke, but they just don’t have the same relationship. Of course, you’ve got to have a reasonable price too.”

And that might be another part of the problem. A source familiar with the Park House job said Skanska had the best team, the best programme and was the favoured bidder, but the price was too high.

“I’m not going to disclose what our particular strategy is,” says Putnam, “but what I can tell you is we are not prepared to chase volume at unsustainable returns; we won’t buy work. Another thing is, we value relationships with existing clients and we don’t want to put ourselves in a position where we have to try and recover poor situations.”

An industry analyst agrees: “In a market like this, that’s the decision you have to make: either expand market share dramatically, which will require a big drop in margins, or make redundancies. I think even pin-up boys like Balfour Beatty and Wates will have to look at headcounts. Skanska hasn’t quite clicked in the UK market, but even so, it will not be the only one to go through this process.”

It’s a fair point: Bovis Lend Lease and Laing O’Rourke have already made redundancies, and perhaps other firms are simply holding out a little longer. Putnam says: “The challenge will hit most companies this year or the next, and I think if people are being honest they’ll admit it’s affecting them too.” But unless the work starts picking up, Skanska could be more affected than most.