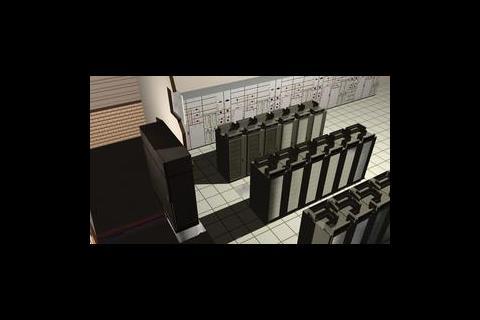 The high heat output from blade servers has to be spread through a large number of computer cabinets when a conventional cooling system is used. 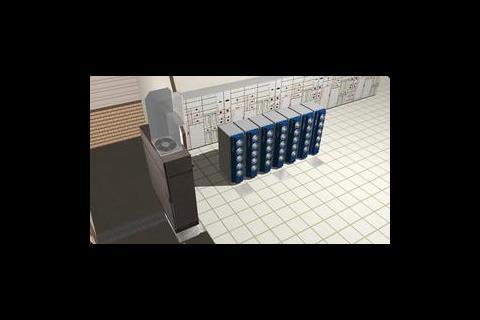 The enhanced cooling ability of the CO2 system allows the computer cabinets to be filled with blade servers so fewer cabinets and less floor space is needed for the same number of servers. 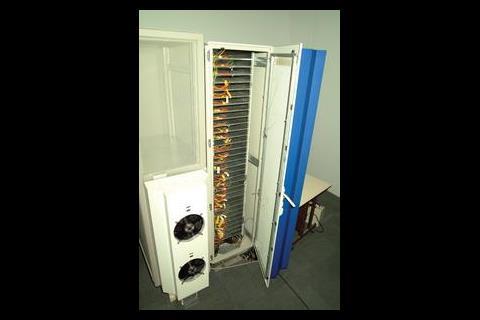 As computers have become more complex, and more hardworking, they have also become increasingly hot and bothered. But now Trox has come up with an innovative carbon-dioxide system that will help our electronic friends keep their cool.

In a small laboratory, tucked into a quiet corner of Trox’s Thetford factory, a revolutionary new cooling system is being tested. This system has been developed specifically to remove heat from IT cabinets. Until now, developments in IT, and in particular the introduction of a new generation of high powered computer server units called blade servers, has caused the heat loads of computer cabinets to rocket. As a result, over the past decade heat loads have increased from a manageable 5kW to loads upward of 20 kW, and even as high as 30 kW.

The challenge for designers is that heat from the units has to be continuously removed from the computer suite to prevent temperatures rising and the servers overheating and crashing. Conventional computer suite cooling systems do not have the capacity to deal with racks full of the new blade servers, which is why Trox has high expectations for the cooling solution currently under test in Norfolk.

So far the firm has developed a cabinet-mounted cooling unit capable of removing 20 kW of heat from a single 600 mm wide computer cabinet. Over the next few weeks, engineers from the firm will be testing an enhanced specification prototype, which Trox hope will be able to deal with a 30 kW heat load. The testing is crucial because the cooling system does not use conventional refrigerants; instead it uses liquid carbon dioxide to absorb heat from the units. If it is successful it will allow computer suites to be more densely stacked and so will enable the creation of smaller data centres. And, it is claimed, the units will be cheaper and more energy efficient to run than conventional computer cooling systems.

The idea of using carbon dioxide in its liquid form came from refrigeration specialist Star Refrigeration. Star approached Trox to discuss the possibility of using CO2 as a refrigerant in the firm’s chilled beam systems. But Trox had other ideas. “Being electrically benign and the increased heat transfer capacity of a CO2-based system means that it can provide over seven times more cooling than water – making it the ideal solution to the problem of cooling the blade server cabinets,” says Guy Hutchins, business development manager at Trox.

Trox was well aware of the need for the system. Hutchins says the amount of heat that can be removed using an existing air-based cooling system is “around 8 kW per cabinet”, and more cooling can be generated using a water-based system: “Up to 15 kW of cooling could be provided if a rack-mounted water-based cooling system is used,” he says. However, the problem with water is that it still falls short of the 30 kW of cooling required and most IT operators are wary of having a water-based system anywhere near their precious charges. “Conventional solutions employing air and water are widely recognised to be at their practical limits and are unable to deal with the intensive loads that blade server technology is placing on them,” explains Hutchins. All of which explains why Trox is keen to develop the CO2 option.

Compared with air and water, CO2 has numerous advantages for cooling computer cabinets. For a start it is abundant and cheap. Hutchins says it costs about “£0.30/kg compared with refrigerant R134a, which costs about £5/kg”. It is also non-flammable, has zero ozone depletion potential and a global warming potential of 1, compared with R134a’s 1300. The compound has been used as a refrigerant since the 1860s and retailers such as Asda use it in their cold store cooling systems. From the IT operative’s perspective CO2 has the advantage of being electrically benign, so even if it does leak it will not damage any of the expensive servers, cabling and gizmos. If a water leak occurs, regardless of whether it causes damage, it invalidates a cable manufacturer’s warranty.

There are, however, one or two drawbacks associated with CO2 systems. To keep the CO2 at 14ºC and liquefied it has to be contained at a relatively high pressure. For the blade server coolers the system is at 50 Bar, which means the pipework has to be high specification flexible stainless steel or fully welded depending on the system. CO2 is also denser than air and can displace the oxygen in a room. At sufficient concentrations it can be dangerous, so gas detection and alarm systems, similar to those used with fire suppressant systems, must be integrated.

Eighteen months after their first meeting, Trox and Star Refrigeration are just weeks away from having a CO2 based a blade server cooling system ready to launch. Called the CO2RAC, the system will comprise two cooling circuits, a conventional chilled water circuit and the pressurised CO2 circuit, linked by a heat exchanger.

The CO2 circuit will serve the computer suite. A computer cabinet can contain up to 84 blade servers with a total heat output as high as 24 kW. Each server has an integral fan to take air through the unit to keep it cool: the air is drawn from the front of the cabinet over the server and discharged at the rear of the cabinet. The Trox blade server cooler has been developed to absorb this heat before it leaves the cabinet using an evaporator attached to the back of the server cabinet. The evaporator contains the CO2 charged cooling coil. Five variable speed fans draw air over this coil, cooling the air back down to room temperature before it is expelled.

Throughout the cooling process the CO2 circuit remains at a constant temperature of 14ºC, because the heat energy is used to boil the CO2 to convert it from a liquid to a gas (see box over the page). This has the additional advantage of maintaining the system above dew point, eliminating the possibility of condensation. Also, because CO2 is less viscous and provides more cooling capacity than water, lower volumes flows are required, which means pipework sizes and pump power can be reduced.

In addition to the cabinet-mounted evaporator, the CO2 circuit consists of a pump, a receiver vessel and a heat exchanger where the CO2 gas will condense. Trox will supply the pump, condenser and receiver as a single packaged unit. A conventional chilled water circuit removes heat from the CO2 circuit via the heat exchanger. There are two options for the system. For data suites that are being upgraded to incorporate a dedicated CO2 cooling system for the blade cabinets, but already have sufficient cooling capacity, the existing chilled water system can be used to remove the heat from the CO2 circuit through the heat exchanger. Alternatively, Trox will provide a complete turnkey package system including a chiller with a capacity of up to 900 kW. “The primary cooling system refrigerant will be designed to suit the project; typically it will use R134a for smaller installations and possibly ammonia for larger projects,” says Hutchins. Trox is even looking at a leasing option

Consultant HurleyPalmerFlatt has calculated that the system can provide cost benefits. The most significant savings will come from a reduction in the amount of floor space needed. The CO2 coolers allow blade servers to be tightly packed into a cabinet, which means computer suites will need less floor space – up to 50% less according to HurleyPalmerFlatt – which could mean reduced rents for tenants. Alternatively, tenants can install more racks in the same area to increase their computing power. The system is also said to use 30% less energy to remove a given amount of heat than a water-based system. On the down side, though, the capital cost of the CO2 system alone will be in the region of 10-25% higher than a conventional system depending on the level of redundancy required.

The CO2 blade server cooling units have been designed to work in conjunction with conventional computer room air-conditioning units. The conventional units will be used to dehumidify and precondition air before it is supplied to the computer suite. Not all computer cabinets have a high heat output, so it would only be cost effective for the Trox CO2 units to be attached to cabinets containing blade servers. “In some installations this might only be 10% of all cabinets,” says Hutchins. However, even with only one in 10 cabinets having the Trox unit, Hutchins says the market for the units could still be about 10% of the $1bn global close control air-conditioning market a year.

The blade server coolers are due to be officially unveiled in October. However, even before the official launch Trox has already received their first order for a series of units after consultant HurlyPalmerFlatt specified the units for the computer suite at Imperial College, London. Installation is expected to be complete by November. The revolution is under way.

How the carbon dioxide is used in the system

To work at its maximum efficiency, the CO2 is used in the evaporator in its phase change state so there is no rise in temperature. The liquid CO2 is pumped to the unit’s cooling coil as a liquid at 14ºC. In the coil the liquid CO2 absorbs heat from the blade servers. The heat causes the CO2 to boil and so change from a liquid to a gas.

Carbon dioxide has a latent heat capacity of 182kJ/kg, so 182 kJ of energy is needed to transform 1 kg of CO2 from a liquid to a gas. Because the heat absorbed by the CO2 is used to convert it from a liquid to a gas, the CO2 leaves the coil at the same temperature it entered, 14ºC, but as a combination of liquid and gas. To ensure liquid is still present for the gas to become entrained in after the CO2 has passed through the evaporator, the system has an over supply of CO2. This has the additional advantage, in a multiple installation, of providing the system with spare capacity.