Carillion's purchase of Eaga: Blinded by the sun 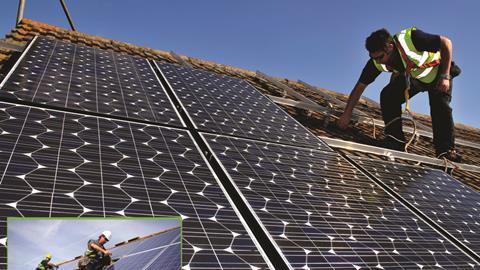 In April, Carillion bought Eaga - a company with big plans to install PV panels on 30,000 homes - and rebranded it as Carillion Energy Services. Seven months later, government feed-in tariffs have been cut in half, and all 4,500 jobs are on the line. So was the £298m purchase a catastrophic error? Building reports

On 7 July this year, contracting giant Carillion gave a presentation to City analysts detailing the strategy behind its £298m April acquisition of energy services firm Eaga and its prospects for growth. On the front of the presentation was a big picture of workers in hard hats securing photovoltaic panels to the roofs of family homes. And inside was the detail of how the company - already rebranded Carillion Energy Services - was going to take advantage of the government drive to get 750,000 solar panels on domestic roofs using the feed-in tariff (FIT) regime to create a £300m business. A story that runs somewhat counter to the line from Carillion top brass this week that the Eaga purchase was all about acquiring an energy services capability to serve the commercial and public sector markets.

It’s not difficult to see why, this week, Carillion would rather not talk about it. Because last Wednesday morning all 4,500 employees of Carillion Energy Services were called in to management meetings and given 90 days’ notice that their jobs were at risk - victims, according to Carillion, of the government’s decision to halve the FIT rate last month, from 43p to 21p per kWh. While there have been many reports of schemes cancelled, and contractor Mears has already said it has written off £5m in lost profit and investment in the market, the sheer scale of Carillion’s announcement has been a huge shock to the industry. It is particularly embarrassing for Carillion, coming just six months after the Eaga purchase - prompting investors to wonder if it really represented value for money. So what are the repercussions of the decision, and how much damage has been done to a firm that, until now, has been one of the winners to emerge from the recession?

It was in 2009 that Carillion’s management decided to get into the energy services market. Prompted by the drift of government policy and the desire of big corporations to save money on energy, as well as the recession closing off many traditional contracting opportunities, it set about acquiring the capability to offer energy services to its many customers. The £298m acquisition of £700m-turnover Eaga was the culmination of that policy - theoretically enabling Carillion to carry out a range of energy-saving works for all of its existing public sector and commercial customers.

﻿People who have got mortgages and children are petrified. It’s particularly worrying in the run-up to Christmas

However, the acquisition came with a couple of key challenges. Eaga’s expertise was largely in the domestic market, rather than providing energy improvements to large corporates, the area where Carillion was hoping for the long-term growth. Specifically, more than 50% of Eaga’s turnover was dependent on government-funded schemes - the Carbon Emissions Reduction Target, the Community Energy Saving Programme and Warm Front - that are either winding down or winding up over the next couple of years. Meanwhile, any future profits from the £14bn Green Deal programme don’t yet look a safe bet, with widespread concern over the policy.

In this context, it is not surprising that the potential of the FIT to drive revenue in the short term took on such prominence in Carillion’s investor presentation. And Carillion’s FIT plan, inherited from Eaga, was certainly impressive. Eaga had set up a £300m special purpose vehicle with £15m of its own cash and the support of five banks, to fund a raft of PFI photovoltaic (PV) schemes. The idea was for the vehicle to pay for the installation of PV cells on the roofs of social landlords and homeowners, and take the 25-year FIT in return - sharing the profits among equity holders.

In addition to the FIT revenue, the installations, targeted at 30,000 homes, were forecast to generate £200m in installation revenues for Carillion Energy Services and a further £50m in ongoing maintenance. Furthermore, this initial scheme was supposed to be just a toe in the water - if successful, the idea was to set up more special purpose vehicles to do more and more installations.

The government’s announcement leaves this plan in tatters. Obviously the first impact is on the staff. Putting the whole Energy Services division on a 90-day notice period while Carillion works out exactly what its future is enables it to act very quickly once it has decided. Widespread rumours suggest that, ultimately, 1,500 staff are likely to be affected, and Carillion has doubled its allowance for “restructuring” costs at the division to £40m. Those keen to take voluntary redundancy - Building understands all have been offered a month’s pay in lieu plus 15% of their annual salary - could leave the business as early as today. Gemma Taylor, area organiser in the North for union Unison, which represents a limited number of Carillion Energy Services employees, says it has hit people hard. “People that work in the call centres are very low paid. These are people who have got mortgages and children and are petrified. It’s particularly worrying in the run-up to Christmas.”

Some of Carillion’s customers - many of whom are waiting to see whether promises of solar PV panel installations will be honoured - haven’t fared well either. Aysel Arif, a building maintenance surveyor at housing association Welwyn and Hatfield Community Housing - a flagship customer with more than 500 panels installed by July this year - said that by Friday last week he had heard nothing. “You’d think they’d contact us out of courtesy. So far they’ve not pulled people off site, but we’re waiting for an official statement.”

However, an email on Monday morning to key customers from the division’s strategy director John Swinney, seen by Building, sheds some light. It implies that the free installations business for housing associations will end, describing it as “particularly problematic”. It explains that the government’s FIT decision means it will be “stopping the direct delivery” of PV systems. “We are still committed to the marketplace,” Swinney says, “but will be re-focusing our service offering around delivery through SMEs.”

Building understands that Carillion expects to have installed just 10-12,000 of the 30,000 solar panels it originally targeted before the FIT-rate cut-off date of 12 December. This means it would receive just over a third of the anticipated £250m in revenue in the short term - a painful hit even for a £5bn-turnover colossus such as Carillion. Chief operating officer Richard Howson was unable to confirm that figure, saying it was “too early to know” but conceded “it may end up at that kind of figure”. It comes at a challenging time for the business, which is already in the middle of a restructuring programme in its UK construction business designed to reduce it in size by a third. However, the award of a £395m contract in Qatar on Monday - potentially making up for the whole FIT problem in one contract - put it it context, demonstrating the resilience of global revenues for a business that employs 50,000 worldwide.

Hence Howson, who takes over as chief executive in January, says Carillion won’t write down profit expectations at the business, or write off goodwill associated with the Eaga purchase, pointing out that the FIT business is just 1% of turnover. While other companies may have been sunk by similar news in the current market, analysts are broadly of the view that, with 50,000 staff, Carillion can absorb it.

And so far they believe the story regarding the Eaga purchase. Andy Brown, construction analyst at Panmure Gordon, says: “If you want to be negative, you could ask what on earth Carillion is doing spending £300m on a company with its revenues predicated on programmes like Warm Front. And it wasn’t helped by the presentation in the summer, all about housing. But in reality the purchase was never about putting solar panels on 30,000 roofs - it was about giving Carillion a broader range of services to link in with their existing clients.” Howson says: “The original rationale was to service our existing customer base, and the appetite we’re seeing from them for energy services is as strong or stronger than ever. Solar PV was just an added opportunity.”

Swinney’s email to customers makes it clear that the review of Carillion Energy Services isn’t just about FITs. It is also about restructuring the business to adapt to the market - singling out the Green Deal and Energy Company Obligation policies in particular. And while the cuts at Energy Services are worrying, it is this exercise that is more important in the long term. Kevin Cammack, analyst at Cenkos, says: “Eaga is probably not worth today what Carillion paid in April by dint of the lost future revenues. But on the Carillion scale it’s not a big hole group-wise. The key is outlining a convincing strategy for how it can grow from here.”

So with the jury still out on the government Green Deal initiative, it looks like the first job for Howson as chief executive will be to sit down and rewrite that July presentation.