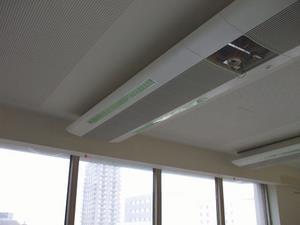 High induction chilled beams with twice the cooling capacity of their predecessors are set to make a cool entrance onto the market, as BSj discovered

Recent developments by chilled beam manufacturers look set to revolutionise the market. Until now, the application of the units has been limited by their cooling capacity. But manufacturers such as Trox and Waterloo Air Products have gone back to the laboratory to refine the induction process and develop what they term “high induction” chilled beams. According to Michael Holland, laboratory manager at Trox UK, these high induction units have the potential to either double the cooling capacity of the beam or to halve the volume of primary air needed to induce the necessary airflow.

A passive chilled beam is basically a unit containing a cooling coil suspended horizontally beneath the ceiling. It works using natural convection. As the coil cools the air, the air descends into the room, dragging more air over the coil – see figure 5. Typically, the cooling capacity of this type of unit is about 300W/m.

Active chilled beams work slightly differently. As with passive chilled beams they still have a cooling coil. However, active units also use a primary air source (usually the room’s fresh air supply). This is ducted to a central plenum that forms the core of each unit. This plenum is pressurised and so air is forced out of the unit through nozzles and across the ceiling, where it mixes with the room air. As primary air passes through the nozzles it is accelerated, causing a local drop in pressure, drawing in – or inducing – secondary air over the cooling coil and through the unit (see figure 6).

According to Holland the induction ratio is about 4:1. In other words for every litre of primary air, the unit will induce about four litres of room air. This induction effect gives the active chilled beam a higher cooling capacity than a passive unit, often generating up to about 500W/m of cooling. However, despite the increased cooling capacity, this is where induction units are limited in their application. The problem is that in many buildings the volume of fresh air required is often so low that there is insufficient air passing through the beam to create induction, prohibiting their use. But the newly developed high-induction units are claimed to overcome this problem.

For Trox, the starting point for development of the high induction units was the air path, both through the unit and through the induction nozzles themselves. “The more air we induce, the more efficient the unit,” Holland explains. Trox’s German arm spent the first nine months of development trying different induction nozzle configurations including changing the size, shape and spacing, and type of nozzle to optimise a beam’s performance.

The company found it was easy to match a unit’s performance to application and it was more cost-effective to generate induction by using holes punched into the plenum’s steel walls rather than by fitting different configurations of plastic air nozzles to the unit. “Using a different combination of holes, we can very easily change the spacing and direction of air discharge from the beam unit,” Holland explains. “The holes are precisely shaped and configured in such a way that they optimise airflow through the beam to double the induction ration to 8:1,” he adds.

Waterloo Air Products is also researching ways to improve the design of the firm’s active chilled beams to increase the induction rate. However, when Wander ter Kuile, technical manager of Waterloo Air Products, initiated the research he first wanted to verify the performance of the company’s existing beams. Waterloo employed research organisation BSRIA to carry out the testing. “We did the testing according to EN15116,” says ter Kuile. This required the construction of a suitable test facility at BSRIA.

Having established the performance of the beams, he also wanted to examine the limits of active beam performance and in particular how to increase the induction effect in the unit to increase its performance. “The technology of chilled beams has been around for a while, so we want to find ways to push the envelope of performance and give potential users more reasons to specify them.”

For Waterloo, this attempt to push beam performance to the limit threw up some unexpected results. Different water flow rates were used to vary the beam’s performance. Figure 4 shows the cooling capacity per metre length of beam, against increased air velocity through the nozzle. “We found this resulted in curious behaviour,” ter Kuile explains. What Waterloo discovered was that, as the velocity through the nozzle was increased, the amount of air induction that takes place increased, and hence the amount of cooling produced by the beam. “That is to be expected,” ter Kuile says. “What was not expected was that there appears to be a point where increasing the nozzle velocity causes a loss in the effectiveness of the induction process.”

Figure 4 illustrates this step-change in performance. “Our tables have been based on a straight-line relationship as determined by previous research, and haven’t taken this into account before,” says ter Kuile. Just to make sure this was not a spurious result, the manufacturer tested a unit below the trigger point and the numbers were confirmed. “Using these findings we can now predict much more accurately what will happen to beam performance based on the observed relationship between nozzle configurations and primary flow rates. In some cases the test figures are about half the performance of what would otherwise be expected,” ter Kuile says. Knowing both the minimum airflow rate at which induction will occur and the maximum airflow rate before the effectiveness of induction starts to fall away again will ensure the optimum performance of the units.

According to ter Kuile, these results point to the potential for development of variable nozzles or slots in active chilled beams, which could be adjusted in order to ensure a stable performance level without the drop-off. “It might be possible to use a manually adjusted, or even an actuated hit-and-miss type damper arrangement to regulate the airflow.”

Finding the step-change in induction rates has led ter Kuile to start to examine other aspects of chilled beam performance. The manufacturer is also looking at the effect the beam’s length has on its output. “The coil itself is a single circuit, so it makes sense that heat rejection is going to change along the length of that coil. There will therefore be an optimum length for the most efficient performance at any water flow rate.”

Ter Kuile is also looking at the width of the units. “We know, based on our research, that narrower coils are more efficient than wider coils. Narrower coils are also more energy efficient as there is less pipework and less pressure drop so you need less energy to overcome that. I believe there will be an optimum width for a chilled beam since most of the induction takes place at the edge of the beam.”

The challenge when looking at maximising product performance for the construction sector is that any advances must inevitably be balanced against cost. Ter Kuile points out that in the case of variable nozzles, they could be automated. “You could design a beam with motorised thermostatic valves and actuators, which adjust to the room conditions and temperature. It would be a self-regulating system to optimise energy performance. It is feasible, but the cost would need to be measured against the benefits.”

Meanwhile, Trox launched a version of its high induction chilled beam in May this year. But for Holland, the development process continues. He wants to increase the induction rate further. His aim is to reach an induction ratio of 10:1, which he says “is achievable in the next two years”.

To do this he is developing the body shape of the chilled beams to reduce air resistance and improve the airflow rate still further. Currently he is modelling various beam configurations using CFD analysis before testing them in the laboratory. The units draw room air in from underneath and discharge it horizontally across the ceiling.

“These particular high-induction units are only suitable for applications which do not use a suspended ceiling,” Holland explains. Generally such suspended units need to incorporate the services that would have been incorporated into the ceiling. So in addition to the cooling coil and fresh-air supply, it is likely that the units will also incorporate other room services, such as, lamps and control units, fire and smoke sensors and alarms, public address speakers, acoustic insulation and even sprinkler heads. And when coupled with a 4-pipe coil the units can also enable the beams to provide heating in some applications. Holland says the low resistance units will generally be installed at about 3m centres. “This set-up will ensure both the air distribution and lighting work effectively.”

Waterloo Air Products has yet to launch a new product based on their findings. Instead they are using the data to ensure their existing range is specified for optimum performance. However, as the market for chilled beams develops, Waterloo has the information at hand ready to respond to new commercial opportunities as they arise, and in particular to the emerging market for high induction chilled beams.

Chilled beams are already an established technology for refurbishment-type projects.

In particular, multi-service chilled beams are suited to buildings that require air conditioning, yet have low floor-to-ceiling heights because they allow the services to be accommodated without the need for a false ceiling.

The increased output from the high induction units and the demand for increasingly efficient services are likely to drive the market to seek out these sorts of technological improvements and apply them to new applications where previously they would not have been suitable.