Developer Grosvenor Estate wanted a sleek office block that could hold its own opposite London’s Victoria Station and attract firms from the West End and the City. Cost consultant EC Harris, architect Squire and Partners and contractor Sir Robert McAlpine explain how the project team achieved all this at 4% less than the contract sum. 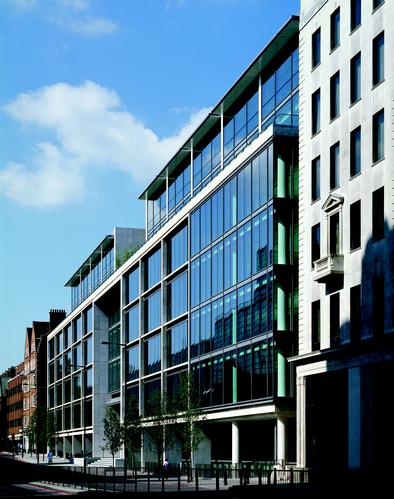 The design team, as well as client and contractor, entered into a unique formally binding partnering/sharing agreement at the early stages of the project

The brief from joint venture client Grosvenor and JER Partners was to create a development of extremely high quality appropriate to its prominent location within the Grosvenor Estate. The new building was to replace an existing 1970s building that had stood empty for several years. A strong contemporary design was sought, which would appeal to large corporate or public organisations seeking office space in Westminster. As the development was speculative, flexibility was key so that the office floors would be suitable for different types of tenant: from banks with dealer floors occupying open-plan space at high desnity, to government or legal tenants who prefer lower density cellular offices. The development set out to meet the revised Part L2 regulations on energy efficiency, and give excellent access to people with disabilities.

Belgrave House’s dominant feature is its 110 m frontage facing Victoria Station, which Squire and Partners responded to by emphasising the glazing in the facade composition. The crisp, disciplined treatment of the facade is intended as a mark of distinction in an area of frenetic development and expresses the building’s status as serious contender in the West End and City marketplace of contemporary business accommodation.

Beneath the consistently modern facade lies a classical sense of order. Horizontal elements at base, middle and top are clearly expressed, with a central four-storey portico marking the entrance. The facade is subdivided into a series of rectangular bays that are all 9 m wide, fully glazed and framed in crisply detailed Portland stone to articulate the structural grid. The articulation of the facade breaks down the apparent scale of the building and creates a strong rhythm along the street. At ground and basement floors, the elevation is colonnaded to soften the transition between glazed vertical facade above and the horizontal pavement and street below.

The building is approached up a wide flight of granite steps and through the revolving doors, which are 5.2 m high and the tallest in Europe. A spacious, double-storey reception hall is flanked by walls lined in Portland stone, while the circulation area and lift core at the rear are defined by walls of more heavily patterned Aurisina stone.

A slender bridge with clear glass balustrading crosses the reception space at the rear to add animation and movement.

A typical upper floor has 4000 m2 configured around a central core of lifts, stairs, toilets and ample tenant riser space. The arrangement enables future subdivision among two, three or four tenants per floor. An atrium rises from the fourth to the sixth floor towards one end of the buiding, and if required at a later date, this can be extended down to lower floors, where “soft spots” have been built into the structural floor slabs. Soft spots are also provided for a second atrium towards the other end of the building.

Natural light is a major feature of the office floors, as they are bounded on all four sides by continuous floor-to-ceiling glazing, something of a luxury in a central London location. The 15 m structural grid comes with only eight internal columns on each floor, leaving the large floor plates virtually uninterrupted.

A landscaped roof garden with timber decking on the fifth floor offers spectacular views over Westminster. Overlooking the terrace garden is a 4.5 m high pavilion, which makes up the sixth floor and serves as a lofty boardroom or hall for corporate entertainment.

The client allocated a sum of £150,000 for public art, in line with Westminster council’s policy for new developments. The artist Martin McGinn was commissioned out of a shortlist of six artists introduced to the client and architect by art consultant Modus Operandi. He created an original artwork in which floating flourescent light tubes are seen through a large glass screen. It dissolves the boundary between public and private space by passing from the top of the external steps through the clear glazed screen to the internal reception hall.

As a commercial property developer, Grosvenor favours partnering agreements that run alongside the main contract. With the aim of making best use of each participant’s resources, the approach involves an agreed procedure for problem resolution and an active search for continuous measurable improvements. It also spells out how all parties will share in any pain or gain that may arise during the project.

Two key innovations were incorporated into the partnering agreement at Belgrave House. The first was that the agreement was made formally binding. The second was that the consulting engineer and the quantity surveyor were included in the financial pain and gain arrangement, but because of its policeman role as contract administrator, the architect was included in a separate working agreement with the contractor instead.

Design management workshops were set up very early in the project by Grosvenor’s project management division. The workshops established the fully integrated design team process and programme with dates for delivering procurement and production information.

The management of the information production was delegated to the contractor. The procurement and construction programmes followed the design programme so that the design would not be compromised by fast-tracking.

Buildability issues were resolved early on as a direct result of integrated team working. In particular, prefabrication techniques were adopted for building services elements. Modular pipe work and electrical services reduced the number of skilled staff on site, limited construction waste and damage on site, and improved the quality and reliability of these specific building elements.

The unit construction cost of £1842/m2 is up to 27% higher than that of a typical speculative office building in central London. However, Belgrave House comes with high-quality design and specification more appropriate to a bespoke landmark headquarters building. These include the fully glazed facades, high quality finishes to the reception hall and toilets, and compliance with the upgraded energy efficiency regulations. As for the construction contract itself, this was completed with an estimated 4% cost saving on the contract sum. These cost savings grew out of a negotiated two-stage procurement process adopted to achieve a fully integrated design, procurement and construction process.

The first stage involved the selection of Sir Robert McAlpine as main contractor. The contractor became an integral member of the project team in the production of detailed design proposals to RIBA plan of work Stage D, which formed the basis of the agreed contract sum. The contractor’s role was to offer direction and advice on design co-ordination and management, value engineering, “buildability”, programme and the overall sequence of works.

With the Stage D report complete, EC Harris and Sir Robert McAlpine jointly completed a detailed quantification and pricing of the works to form the target cost plan. Once the cost plan was formally agreed as a lump-sum contract, it was presented to each member of the design team to ensure a common understanding of their respective roles. The agreed cost plan formed the basis of a collateral agreement that set down the mechanism whereby any variances between the contract sum and the target cost would be shared between the parties.

Five key subcontractors were also brought on board at an early stage with a similar two-stage procurement process. After a competitive first stage, the subcontractors’ key individuals were invited to sit along side the design team. This integrated the trade contractors within the design process and the procurement and construction programme. It helped identify and manage risks, and drove cost and time efficiency.

Other packages were procured on a single stage process and generally adopted the use of a quantified schedule of rates for bills and quantities.

The revised Building Regulations covering energy-efficient measures, Approved Document Part L2, came into force in April 2002. Although detailed design was largely completed before this date, the client agreed to comply with these revisions from the initial design stages, assuming that compliance would be necessary on completion of the building.

One of the most prominent features of the building is its extensively glazed facades, which give it a striking presence on Buckingham Palace Road and create large internal spaces with natural light. However, the glazed facade design required the use of carbon performance rating (CPR) to demonstrate compliance with the revised Part L2. The CPR method compares the total amount of carbon produced in the proposed building with that of a theoretical building which has glazing levels that satisfy the more straightforward “elemental method”. Early consultation between the design team and the cladding contractor led to the specification of glass with high solar and thermal performance, and the development of a series of robust details to reduce the amount air leaking out of the building.

Other energy efficiency measures were incorporated as a result of NG Bailey being appointed early on as mechanical and electrical contractor as part of the partnering agreement. This meant that services consultant, Whitbybird, was able to carry out a thorough environmental impact and cost analysis.

As a result, the following specific features were incorporated: