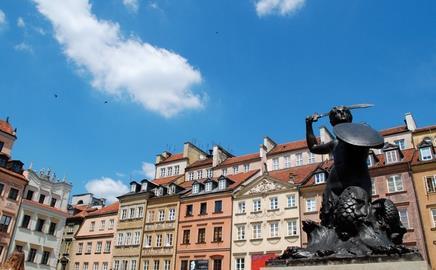 Despite the exodus of native workers since the country joined the EU, Poland’s economy and construction market have gone from strength to strength. Marcin Klammer of EC Harris reports

As the new Polish government, Donald Tusk’s Civic Platform party, settles in after October’s election, the perception is that the new leaders are likely to play a more co-operative role with the EU than their predecessors.

The economic situation is stimulating development and investment in commercial real estate. An influx of foreign capital since 2004 has been a catalyst for property development and industrial growth. In the early years of its EU membership, most commercial properties in Poland were put on the market with a high return on initial investment. A lack of commercial properties has driven development in all major business centres. Several large companies, including LG Philips, Dell and Bridgestone have confirmed they are moving into Poland.

Foreign investors are choosing regions close to motorways connecting to western Europe, for example Wroclaw, or those with a well-educated, highly-trained local population, like Krakow and Warsaw. Lodz is centrally located, provides a well-educated workforce and good connections with other parts of the country.

The Polish economy has also profited from the EU subsidies from cohesion funds and other investments for infrastructure.

The Polish property market was already steadily developing before 2004 but boomed the day after it joined the EU. A significant influx of foreign capital, not witnessed in the other accession countries, has been partly responsible for a decrease in yields, but also stimulated development growth after two years of decrease between 2002-2004.

Foreign capital has affected all property sectors, particularly residential. This part of construction became a market of its own after decades of domination by the so-called housing co-operatives – entities established under the Communist regulations to develop residential projects.

The residential market is diversified. Major players – Polish as well as Irish, English, Spanish, Israeli and others – are involved.

The growing market has inevitably affected property prices in major cities and created interest in smaller towns, which were previously unpopular. Poland has 42 towns with more than 100,000 inhabitants, so still has a lot to offer to property players.

As a result of this activity, construction in Poland has gone from being an investors’ market in 2002/2003 to a contractors’ market. It is estimated that prices have risen almost 20% over the past two years. Contractors can now choose between property and infrastructure contracts based on profitability, although there are restraints in the supply of workforce and materials.

The coming years look promising for the construction sector. The recent political change is perceived positively by investors and entrepreneurs. Stable growth should be maintained by continuing investment by the government and EU.

The recent announcement in April that the Euro 2012 football tournament will be held in Poland and Ukraine is already creating demand for construction services. Six football stadiums are to be built or modernised in Warsaw, Wroclaw, Gdansk, Poznan, Krakow and Chorzow, as well as training centres and infrastructure.

In addition, investment in other projects related to Euro 2012 has been backed by the government. Hotels, conference centres, training and leisure centres, residential and other commercial investments can now qualify as Euro 2012 projects and receive fast-track approval. This is positive, as administrative restraints, claims, objections and lengthy approval processes have, in the past, been major obstacles to the successful execution of real estate projects.

Even though Euro 2012 is a state commitment, individual investors have seen it as a chance to fit their projects into the five-year, fast-track schedule. Many large projects, such as office towers, shopping centres and leisure investments, including the Modern Art Museum in Warsaw, will be tendered in the next 18 months.

On the infrastructure side, further investments are planned for the next five years. Although Poland has 600km of motorways, there are still 900km more to build, and the construction of expressways and upgrading of national roads.

There are also plans for investment in water and public transport, including a second metro line in Warsaw, and the modernising of 52 train stations into modern commercial centres.

The most in need are in Katowice and in east Warsaw, where a strip of land next to the station has been earmarked for development.

There is also the need to upgrade airports and build 10 new terminals.

While major economic growth has taken place in Poland since 2004, paradoxically, about 2 million young and qualified Poles have left to work in old EU countries.

Some 15% of this outflow has been from the construction industry, leading to salary increases at almost all levels. On site, labour rates for a number of skills increased by 15% in 2006; a further 14% is expected this year, with only a marginal slowdown over the couple of years.

However, many have started coming back, accepting lower salaries but benefiting from a lower cost of living.

This has had a positive impact on construction, since those coming back have worked on projects using modern technology and well-organised teams, so are better trained and have a beneficial effect on local teams.

However Poland still lacks specialists in some areas, partly because after Poland regained its independence, young Poles sought out managerial and marketing professions. This led to a shortage of experienced engineers and construction specialists.

The other reason is that in the eighties, while Poland was still under Communist rule, few major infrastructure projects were undertaken, with few railroads, alternative sources of energy and motorways (these did not exist before 1989). As a result of this lack of investment, the only experts in infrastructure projects are people well into their sixties.

The development of the construction market has led to increases in material prices locally, with the price of concrete, mineral wool and Gypsum boards up by 30% in just 18 months. This has led to structural steel being shipped in from Germany, a situation which would have been unthinkable a short time ago.

This only eased when prices in Poland rose to levels comparable with those in western Europe.

Now, rates have stabilised and maximum growth is anticipated at the level of 5-7% per year.

The positive outlook means developers, investors, contractors and consultants all face challenges. Not only do they have to recruit specialists to respond to growing demand for infrastructure projects, but also have to balance rises in private commercial tender prices with risk of price and salary rises.

Contractors are less willing to accept these risks and are unwilling to tender for lump sum contracts, something which was unheard of three years ago.

In response, developers and investors are seeking other solutions to reduce prices, which often exceed their planned costs.

Developers appear to think construction management (CM) achieves lower costs and certainty of time. However, it is also apparent that developers choosing CM face the same problems that have pushed contractors into not accepting lump sum contracts.

EC Harris believes that, instead of using CM, developers should look for innovative solutions and expand their supply chains. This is a better approach than facing the challenges on the local market and being at the mercy of contractors and suppliers with full order books.

Establishing a supply chain that benefits from products and services in the country of their origin will become the way forward for the successful execution of better value projects.

While global procurement is not easy, it will differentiate successful and unsuccessful projects in the years to come. Not only will companies have to be more competitive, but they will also become more independent from local market disturbances.

Procuring globally may create an alternative to local markets, but prices abroad for purchase, transportation and import must be compared with local prices.