Unless all parties understand where key responsibilities lie, a project can quickly unravel. This CPD, sponsored by QUALSURV International, highlights the major project roles, and areas of misinterpretation, under NEC contracts 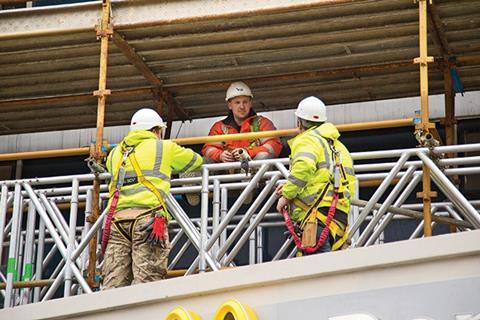 The UK construction industry remains a contentious one, with a high level of disputes. Research published in June by consultant Arcadis showed that the value of disputes in the UK had risen by more than 360% between 2010 and 2014. The root cause of claims is often a misinterpretation of the different roles of project team members. By adopting an informed approach from the outset and taking time to understand the responsibilities and liabilities set down in the contract, many disputes can be avoided.

The New Engineering Contract (NEC) is one of the most widely used forms of contract in the UK construction industry: informal research by QUALSURV has found that one of its seven forms is used in about 80% of civil engineering projects and half of building projects. However, it is all too often misunderstood and misused, resulting in costly and time-consuming disputes. This CPD will discuss the key areas of misinterpretation and offer guidance on how projects can be managed smoothly and disputes avoided for the benefit of all involved.

The NEC was first published in 1993. It was intended to be a departure from traditional forms of contract – such as those published by the Joint Contracts Tribunal (JCT) or the Fédération Internationale Des Ingénieurs-Conseils (FIDIC) – with a simple structure for clarity and ease of use. It is written in the present tense, keeping sentences short and avoiding the use of legalistic terms. Its procedures are claimed to be non-conflicting and closed. Unlike other forms, users will find no cross-referencing to other provisions of the contract. It does not use phrases such as “subject to” or “notwithstanding” and does to refer to matters of law.

However, the principles behind the NEC are not always adhered to. This is partly because practitioners attempt to apply lessons they have learned on traditional forms of contract, and partly because they do not understand that the NEC form is also designed to be a project management tool. For example, core clause 3 makes the programme an important device for the reporting and measurement of progress. It is often vital to the assessment of compensation events as part of core clause 6. Other project management tools are provided at clause 16 (early warning), which places an obligation upon each party within the contract to notify of an event and call risk reduction meetings for matters that may or are likely to have implications for the programme or budget. There are other illustrations of project management, such as the communication provisions at clause 13. The drafting committee have deliberately used the conditions that govern the agreement between the parties to encourage the practitioners to take a proactive approach to delivery. They have designed the contract to provide greater certainty of cost and time issues as early as possible.

A key difference between the NEC and traditional contracts is the “personalities” or project roles that it contains, which are intended to foster trust and collaboration. There are five major personalities within the NEC. Three of them are identified within the contract data parts one and two:

The other two major personalities are the employer and the adjudicator.

The roles of project manager and supervisor are different to those one might normally find in the traditional contracts. For example, there is no engineer/architect role, and the project manager and supervisor between them fulfil these duties in their capacity as the employer’s representative or agent. The form includes no special role or personality for the designer or the quantity surveyor. These roles, if they are required, are undertaken by the project manager. A possible exception would be where the contract requires the contractor to design the works. 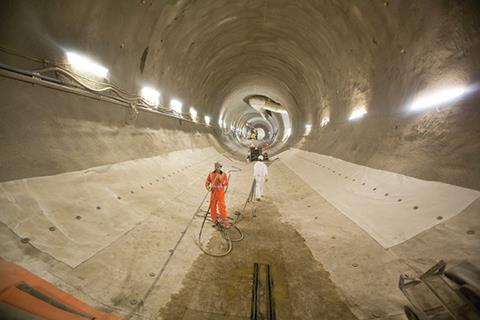 Platform tunnels at Farringdon Crossrail station. The £14.5bn rail project is the biggest ever to be procured with NEC3 contracts

Below, we examine four key areas within the NEC where misinterpretation of these project roles can give rise to disputes.

The contract does not allow the business culture of the strongest party to manage or govern the relationship between the personalities. At clause 10.1, it places a general obligation upon each party (with the notable exception of the adjudicator) to act in a spirit of mutual trust and cooperation. The clause uses the word “shall” – and the personalities should understand that this behaviour is mandatory. Failure to do so by one or more of the parties or their agents (the project manager or supervisor, for example) would constitute a breach of contract, and could lead to a dispute.

In practice, it would be difficult to demonstrate the causal link between the loss suffered and the breach. After all, there is no definitive meaning of “a spirit of mutual trust and cooperation”. However, it is possible to point to case law (Birse Construction Ltd vs St David Ltd) which was a contract governed by a JCT form and which attempted to incorporate the concept of “partnering” as an integral part of the overall arrangement and as a standard by which to measure conduct.

A project manager sometimes delegates powers to a subordinate or colleague but limits those powers to a particular discipline or below a certain value. Through usage, and perhaps through the demands of practicality, these defined boundaries may be breached and the contractor may receive instructions, assessments or other certifications issued without the required authority. These well-intentioned acts may cause no difficulty until a dispute or difference arises. At that time, an adjudicator may examine the contract in detail and try to make sense of what appear to be instructions and find that they are issued by personalities without the relevant authority.

A contractor does of course have the right to refuse to respond to instructions given without the required authority. In practice this is rarely done. At the early stage of a project, he or she may not protest because of a desire to act in a spirit of mutual trust and cooperation. Alternatively, those personalities acting for the contractor may have only joined part way through and are unaware that the project manager has not delegated the necessary power to allow others to perform the act in question.

The supervisor is required to ensure that the works are provided to the standard and performance stated in the works information.

While this role is often performed by the project manager on smaller contracts, disputes often arise from a failure to understand the boundaries within which each personality acts. For example, the supervisor is not empowered to issue instructions or to change the works information. Nearly all of the supervisor’s powers arise from core clauses 4 (testing and defects) and core clause 7 (title).

Under the NEC, the designer’s role is performed either under the control and authority of the project manager or, on a design-and-build contract, by the contractor. As the design of the works provides significant potential for change and therefore entitlement under the compensation event mechanism, it is a process that must be carefully administered. For example, the project manager on a design-and-build contract must avoid changing the works information when discussing how the contractor’s design relates to how the contractor will deliver the works.

A false step in this process could result in change and a compensation event. All too often, project managers take an active role in the design development process, rather than leaving that work to others (the contractor and their designer) and using the “acceptance” process in the contract to test the standard offered. Perhaps this behaviour is a legacy from traditional forms of contract, or a demonstration of collaborative working. 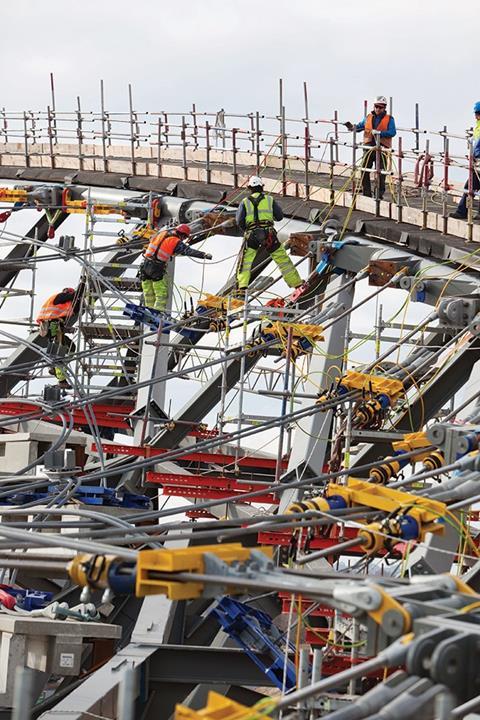 Workers construct the cable net roofing on the 2012 Olympic Velodrome. As with all other major London 2012 venues, it was procured under an NEC3 Engineering and Construction Contract option C

For those used to operating on traditional forms of contract, there may be a cognitive bias towards value systems inconsistent with those required by the NEC form. The challenge is therefore to determine how one can one encourage parties to a contract to adapt to the behaviour required by the NEC. The usual approach is training, designed to enable each personality to develop the required skills and knowledge. But unless training is substantive and ongoing, it will be ineffective. The challenge is to provide continuous education so that the lessons can permeate into the business culture. Only this will enable all parties to work truly collaboratively and in a spirit of mutual trust, while understanding their duties under the contract.