Mouchel and circling suitor Costain upped their PR efforts this week, each playing hard to get and trying to appear nonchalant in the pages of national newspapers

Costain, which has made a series of bids, the latest of which is worth £172m, has become increasingly frustrated at Mouchel for not engaging in dialogue.

Chief executive Andrew Wyllie this week warned he was prepared to walk away from the deal in an interview with the Sunday Times.

“Mouchel is just one of the choices we have,” he said. “It won’t be a blow if we don’t get it. We’ll just get on and do the next one.”

But having previously just advised shareholders to take “no action” over the bid, Mouchel launched its own PR offensive, with chairman Bo Lerenius stating publicly, for the first time, that the latest bid was too low.

“I am not going into what we think the company is worth, but we do think it is worth more than what is on the table,” he told the Daily Telegraph. He also made clear that more than one rival bidder was waiting in the wings.

Andy Brown, analyst at Panmure, said Costain might well now consider a hostile takeover. “I don’t sense it is going to up the bid which, in the current climate, is reasonable,” he said. “It wouldn’t do any harm to go hostile and test the water. From a Costain shareholder point of view, it has not got a lot to lose.”

Continuing to resist the Costain bid represents a bigger risk for Mouchel, according to Brown: “It is relying on its refinancing move and saying ’it’s not going to get any worse’. But if Costain and the other potential bidders walk away, where do the shares fall back to?”

Clarity on the future of Mouchel will only be achieved when details emerge of these other bidders, another City analyst said. “If they are credible, Mouchel has options,” the analyst said. “If not, then a decision has to be made.” 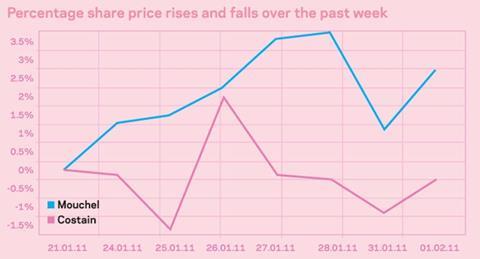