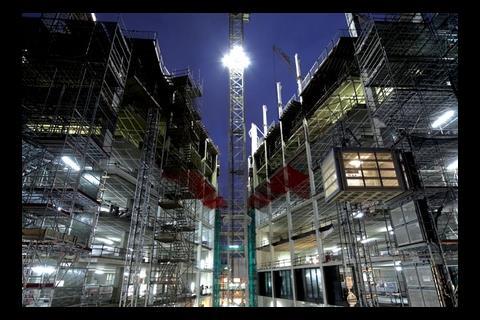 Candy & Candy’s One Hyde Park in central London features a concrete frame, with the perimeter columns cast from a special stone-effect concrete 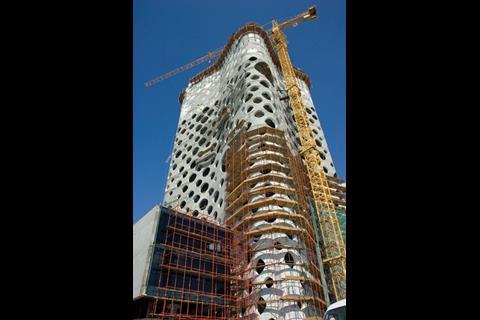 In the first of a new series, the Sense Cost Consultancy team examines the toll the recession is taking on prices in three sectors: substructure, superstructure and cladding

Industry conditions have changed beyond recognition in the past 12 months. Demand has contracted sharply, Britain’s GDP is falling at its fastest pace since 1980 and the economy is likely to be worth 4.5% less this December than it was last. Meanwhile, forecasters suggest that the construction industry is in the middle of its deepest recession since records began 60 years ago.

In the first of three articles exploring trends in the main building elements from substructure to services, Sense Cost Consultancy reviews the current “shell” cost drivers of substructure, superstructure and envelope works and explores the impact of the recession.

Substructure and superstructure contractors report that the recession has had a fundamental impact on their market structure. With projects scarce, firms of different sizes and calibres are being forced to compete head to head. Lower level operators are taking on greater risk and pursuing projects that would have been deemed beyond their capability 12 months ago.

Many cladding specialists are facing the same competitive pressures as their substructure and superstructure counterparts. Glazed curtain walling specialists, however, have the added burden of a depressed pound inflating the price of imported systems at a time when market perceptions suggest that prices should be falling.

Profit margins have inevitably taken a hit in each of these specialisms. Twelve months ago, overheads and profit provision was typically between 4% and 6% of the contract value. Today margins are down by up to 50% and instances have been reported where contractors are pricing at or even below cost to maintain cash flow or a client relationship.

Projects secured before the scale of the financial crisis was fully realised continue to cushion the main industry players. While interest has returned to an extent, there was a period of re-evaluation in the aftermath of the collapse of Lehman Brothers, when tendering opportunities were few and contract awards were even fewer. The impact of this period of indecision and stagnation on procurement will be felt in the next six to 12 months.

Since early 2008, demand for steel has contracted sharply. Prices have fallen by between 25% and 50%, as stockholders have been forced to lower prices in order to release some capital from their now expensive inventories. The adjustment process, however, seems to be in its final stages and further significant falls are unlikely as stockholders begin to replenish at current market rates.

Production has been scaled back rapidly. The World Steel Association reports that global production was down 23% year-on-year in the first quarter of 2009. Third quarter results for Corus, Europe’s second largest steel producer, suggest that liquid steel production fell 31% to 3.38 million tonnes and 23% fewer deliveries were made during the period. Rebar prices fell 27% but formed steel and wire rod continued to rise year-on-year, although they have started to decline quarter-on-quarter according to the World Bank.

Steel contractors face an uncertain time. In general, shorter lead times in residential building, compared with commercial work, reduced the time it took to scale back operations when the market turned. Overall, the commercial sector continued to show modest real growth in activity in 2008, but a decline of more than 20% is anticipated in 2009. This pending fall will weigh heavily on the steel industry, which has already contracted by a third. Commercial orders were down 61% in the first quarter of 2009 year-on-year and a revival in this sector is not anticipated before the end of 2011.

With household debt still high, the contraction in retail projects is almost as tight as that in the offices market. Construction orders for retail projects were down by nearly 30% in 2008 and in the first quarter of 2009 the annualised rate of decline increased to 50%.

The commercial sector is an important source of demand for both concrete and steel specialists. Warehouse construction, however, is steel intensive and in the first quarter orders were down by 46% year-on-year, following a contraction of nearly 40% in 2008.

The education and energy sectors continue to present opportunities, but projects have a long gestation period. With weak prospects for demand elsewhere, industry sources fear that the steel market could be down 50% by the end of the year. A private non-residential sector revival will come towards the end of 2011 at the earliest. However, industry players are confident that opportunities in the infrastructure sector will provide some respite in the nearer term.

To date, market conditions have had little influence on the choice of frame. Steel continues to account for about 70% of the high-rise office market but has gained little ground in the residential sector.

At current prices, building function, site location, and programme continue to be the main factors that are influencing the choice of frame.

In the future, the UK’s self-sufficiency in cement production may prove to be advantageous. Steel production has already fallen by 22% globally, and will be scaled back further. While the global recovery is likely to be slow, China is poised to lead the way and demand for steel may increase at a faster rate than supply, fuelling inflationary pressures once again.

Economic fundamentals suggest that a sharp contraction in demand should effect a fall in prices. The reality, however, is less straightforward with taxation, long-term labour agreements, reverse migration and exchange rate movements all distorting the relationship.

These began to subside in early 2009, but a fall of 4.5% month-on-month in February did little to erode past gains.

Year-on-year prices were still up 36% in February and over the past five years they have increased nearly 140%. Oil prices briefly rose to $60 per barrel, their highest level in six months, in mid-May amid speculation that the worse of the downturn was over. Data to support this is scant, however, and stocks are at their highest for 19 years.

Sterling’s weak position against the euro and the dollar makes home-produced materials attractive. But if imports cannot be avoided, costs will rise. Glazed products, an area in which our European neighbours have particular expertise, are particularly at risk. Sterling’s position has fluctuated in recent months but there has been no discernable improvement overall.

It is estimated that the financial crisis could lead to at least 300,000 jobs being lost across the industry before conditions improve.

Wages have started to fall across the economy. Average earnings, including bonuses, fell by 0.4% in the year to March 2009, down from the February rate of 0.2%. With a relatively high proportion of self-employed workers, construction has been harder hit than other industries. Wages for the self-employed have fallen by up to 50% in some instances.

A 3% increase in the aggregates levy came into effect on 1 April, adding pressure to the declining market for extraction firms. Additionally, disposing of non-recyclable waste became 20% more expensive in April as landfill tax rose £8 a tonne. With industry conditions as they stand firms will struggle to absorb these additional obligations. Some will no option but to pass this increase on along the supply chain.

The government did delay the introduction of its levy on new developments by six months in its April Budget, bringing a mild reprieve to the beleaguered housebuilding industry. The community infrastructure levy will be delayed until April 2010 at the earliest. The levy will allow councils to charge developers a fee per planned home. Money raised will pay for local infrastructure.

Trading conditions for substructure, superstructure and cladding specialists have changed beyond recognition in eight months. Competition in some markets is driving contract values below cost, a position that is untenable. An increasing number of contractors will fall victim to the harsh conditions, prompting worries that capacity constraints will be quick to resurface when demand strengthens.

Cement production contracted 19% in the third quarter of 2008 according to the business and enterprise department (BERR) and in early 2009 sales were down 26%. Industry sources suggest that there has been a further deterioration in recent months and estimate that demand is currently more than 30% lower than a year ago. The Concrete Society reports that three plants have already been forced to close and the managing director of the UK arm of Lafarge Cement recently stated that demand was unlikely to strengthen before 2012.

For piling contractors the outlook is particularly depressed. Mid to high-rise residential developments and commercial projects are among the worst affected sectors and together account for a large proportion of the piling industry’s demand. Orders are sharply down in both sectors; in the offices sector they 40% lower year-on-year in 2008 and fell by a further 69% in the first quarter of 2009. With about 8.9 million ft2 under construction in London, a high proportion of which is on a speculative basis, and a further 19.9 million ft2 available in the first quarter, according to property agent CBRE, the speculative overhang will delay the market’s recovery and will exert further downward pressure on rents.

Concrete frame contractors were equally affected by housebuilders’ swift retrenchment. With the development tap turned off practically overnight, firms specialising in residential were forced to adapt and search for opportunities in other sectors. It is here in the concrete frame market that competitive pressure from contractors entering new markets is most acutely felt.

Concrete specialists report a disparity between enquiry levels, which are holding up reasonably well, and confirmed orders. Actual projects due to break ground this year are minimal but an improvement is expected in the second half of 2010. For piling contractors, conditions will remain tough until early 2011 and it will be a further three months at least before superstructure trades feel the benefit.

Figures from BERR suggest that brick production has already halved and the rate of contraction is increasing. Production in the fourth quarter of 2008 was 49% lower than in the same period of 2007. Stocks at the end of January 2009 remained 11% higher but have been falling for three consecutive months, suggesting that stockpiles are gradually being eroded.

Potential loss of market share presents a threat to European curtain walling specialists. Technological knowledge and a high capital outlay present insurmountable barriers to entry for all but the most serious entrants, but established market players in China are aggressively seeking to cement a footing in the European marketplace.

Consolidation in the glazed curtain walling industry means that European supply is now limited to a handful of major players, leaving clients with little choice and potential entrants with an opportunity. With sterling being equally depressed against the euro, the yuan and the dollar, exchange rates are unlikely to be a significant factor. China’s lower production costs, however, give it a clear edge.

So far Chinese curtain walling specialists’ penetration in Europe has been limited to Germany and the UK, and projects here have been relatively low profile in comparison to those worked on in China and the Middle East. However, Chinese firms are tending for large commercial contracts in London and as soon as they have a few high profile schemes under their belt, their prominence in Europe can only increase.

Recent research by the Mace Business School showed little change in lead times for the main structural packages in the first quarter of 2009. After a series of reductions over the previous quarter, rotary piling lead times have stabilised at five weeks. Lead times of five weeks were also reported for precast piles.

Concrete works have a lead time of nine weeks, and rebar of four to six weeks. Lead times for structural steel frames reduced throughout the second half of 2008 but stabilised at 15 weeks.

This article was written by Darren Bedford, Trevor Bonnage and Mark Williams, who are Sense package champions, and economist Kelly Forrest. Sense would like to thank everybody who contributed to the article.