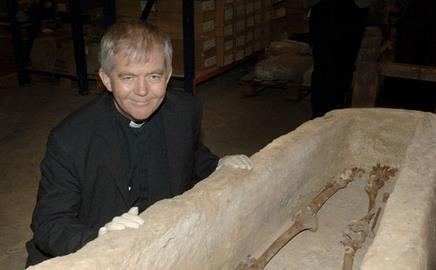 Archaeology is the study of physical remains from the past, both built and buried, that underpin our cultural identity and show us the effect previous societies have had on our landscape.

There are a range of measures in place to safeguard these irreplaceable resources. The most important national sites have been designated as “scheduled ancient monuments” and approval is required from the culture secretary before works are allowed on these.

Most archaeological digs can be planned in the early stages of a project, thereby minimising their effect on the construction programme. Each stage of the excavation will have a timeframe allocated to it, so the rest of the process can continue unhindered. The following case study, which looks at St Martin-in-the-Fields church in central London, illustrates how this can happen.

Usually, the first stage in a project involving archaeology is the desk-based assessment. St Martin-in-the-Fields and its project manager Gardiner & Theobald asked for archaeological advice early in the process. The Museum of London Archaeology Service (MoLAS ) was engaged to assess the site.

The assessment identified the potential for the survival of important deposits and was submitted to the church and the curatorial archaeologists who advise the planning authorities – in this case the Diocesan Advisory Committee and English Heritage.

The next stage was the site investigation, which was co-ordinated with the requirements of St Martin’s structural engineer, Alan Baxter Associates, which had planned a series of test pits to examine foundations. In built-up areas where extensive external machine-dug trenches are not possible, test pits are often the only way to examine the ground.

The results from the site investigation were collated into a report. Once the main aspects of the scheme had been finalised, negotiations took place to agree the scope of the archaeological project and then a written scheme of investigation (WSI) was produced.

The WSI is sets out what is at the site, why it is important, what the client (through its archaeological consultant) is going to do about it, and how it is going to do it. MoLAS produced two WSIs, one for the archaeology below ground and another for the built heritage. For a large, complex project such as St Martin, many strategies could have been appropriate. The approval of the WSI is a prerequisite for any works to begin.

Fieldwork falls into two broad categories, although there are variations on them to meet particular circumstances. The first is excavation, which involves deploying a team on the whole, or a part, of a site for an agreed period of time. They require welfare facilities, a safe working environment, access to specialist support, such as surveyors, professional photographers and conservation advice, usually provided by the contractor. They may also need attendance support, which is usually provided by the demolition or main contractor. This may include the use of plant, bulk spoil removal and site security.

The broad category is called the watching brief. This can vary enormously in scope, but is usually intended as a rapid exercise whereby the archaeological team attends during particular phases of work (often ground reduction, piling and underpinning) to record remains that are exposed. In many cases, a watching brief may occur during demolition or site preparation, before a formally agreed phase of excavation. The team will normally be small – often a single site-based archaeologist with access to support.

At the end of fieldwork an archive of artefacts, paper, digital records, photographs and soil samples will have been collected.

The materials are assessed and matched to what was postulated earlier, and a proposal for further analytical work is derived.

When the assessment is concluded, a report is compiled and submitted to the curatorial archaeologist for approval. This will usually lead to the removal of any planning conditions. Further agreed work set out in the assessment report is then undertaken and may lead to the publication of a book, an article or website. After this, the accumulated archive will usually be given to a local museum.

By integrating works, the impact on the overall programme and the risk to the client is minimised.

Gardiner & Theobald, the project manager for the St Martin’s works, obtained competitive tenders from archaeological consultants, then selected MoLAS for the fieldwork, post-excavation and assessment stages of the project.

The extensive pre-excavation surveys enabled MoLAS to prepare detailed requirements for the fieldwork. Before appointing Costain as the main contractor, detailed programme and temporary work requirements were agreed and, as far as possible, the archaeological work was integrated into the overall works to minimise the impact on the programme.

MoLAS was then appointed as a subcontractor to Costain on the basis of a defined programme and cost, thereby significantly reducing the risk to St Martin of post-contract variation In this project, early archaeological advice reduced the risk for the client and promoted the exchange of architectural and construction information. This enabled the archaeologist and the other contractors to understand what each other needed to achieve, keeping costs under control and obviating unplanned delays.

The discovery of a Roman sarcophagus and some important Saxon burials consequently led not to panic and delays, but to an opportunity to promote the site.

Displaying artefacts found on a site helps to promote projects. At St Martin, a series of excavations have produced evidence for a Roman roof tile-making kiln; a stone sarcophagus, probably dating to the 5th century, at least five Saxon graves with a variety of grave goods including a gold pendant, a hanging bowl and two amethysts; and more than a dozen other burials, probably from the medieval period.

The site has provided evidence of use as a burial ground during the past 1500 years and for domestic occupation and craft activities during the 7th and 8th centuries, with waste from an antler workshop and weaving equipment discovered.

From the 16th century onwards there is evidence for the construction of terraced buildings north of the church until Nash’s work in the 19th century swept these away to establish the appearance and character of the churchyard up to the current renewal.

Department of the Environment 1990 Archaeology and Planning (PPG16)

Find out more about the Institute of Field Archaeologists at www.archaeologists.net, or information about MoLAS and its services at www.molas.org.uk