Activity declined across all three sectors in July, partly due to insufficient demand and labour shortages. Experian Economics examines the latest figures 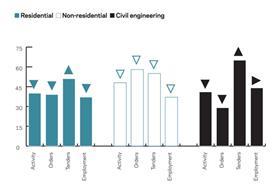 Tender enquiries continued to rise during July, highlighted by the index posting 52, unchanged from the previous month. This did not feed through to orders, however, as the orders index dropped by eight points to 44, indicating that orders were below normal for the time of year.

The employment prospects index remained in negative territory for a 43rd successive month in July, highlighting the bleak prospects for employment in the industry over the coming three months.

In July the proportion of firms indicating that there were no factors constraining activity rose to 29%. This was the highest for three years. However, more than half (54%) indicated that insufficient demand was holding up activity. Despite prospects remaining downbeat for construction employment, 2% of respondents indicated labour shortages were constraining activity, unchanged from last month. While this is not a large proportion, it suggests there are still some skill shortages across certain sectors despite falling employment. Finance issues continued to impact on activity. 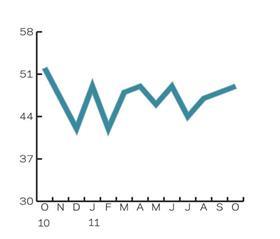 CFR’s Leading Construction Activity Indicator shows that construction activity will continue to decline over the coming three months. However, the pace of contraction will slow, with the index expected to increase by three points to 47 in August and then edge up to reach 49 in October.

All respondents in the civil engineering sector indicated that annual labour cost inflation was between 2.6% and 5% in July. This was in contrast to three months ago when about 67% indicated an annual decline in labour costs.

The picture from building companies was more mixed as 41% indicated that labour costs had declined from a year earlier. This compared with just 28% three months ago. 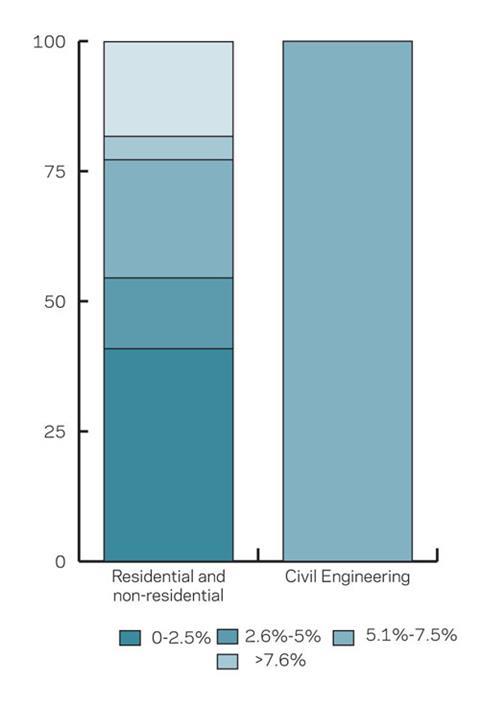 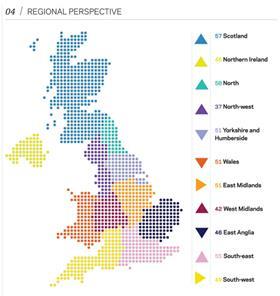 The index for the West Midlands increased by two points but still remained in negative territory at 42. The indices for Scotland, the South-east and Northern Ireland all edged up
by one point.

In contrast, the Welsh index dropped by six points but remained above the no-change mark at 51. This was its lowest reading for four months.

The index for East Anglia fell by three points to 46, again a four-month low for the region. The index for Yorkshire and Humberside edged down by one point to 51.

The indices for the East Midlands and the South-west remained unchanged at 51 and 49, respectively.

The index for the UK, which includes firms working in five or more regions, was one point lower at 53, its lowest level for seven months.