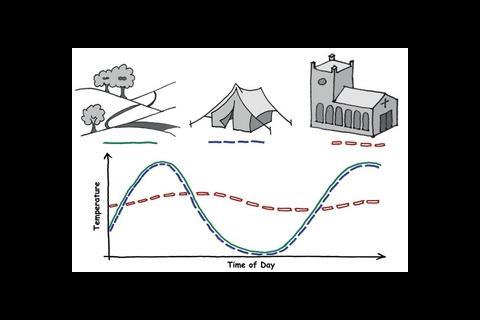 Buildings respond to the daily temperature variations in different ways, depending on their fabric. Neither the tent nor the church has conventional insulation in the building envelope, but the ability of the masonry fabric to store heat energy in the church creates an entirely different response to temperature changes. 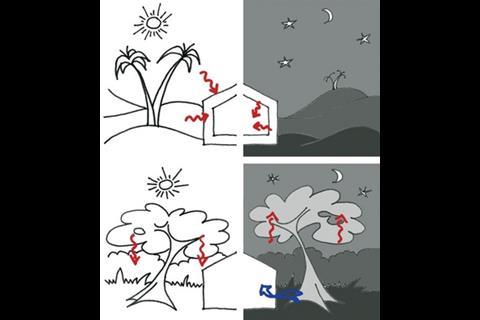 Vernacular housing all over the world has developed empirically to represent the most energy efficient response to the various climates encountered. Desert homes typically have high thermal mass to even out the dramatic swings in daily temperature. Conversely tropical homes are lightweight to make the most of the slightest respite in temperature. 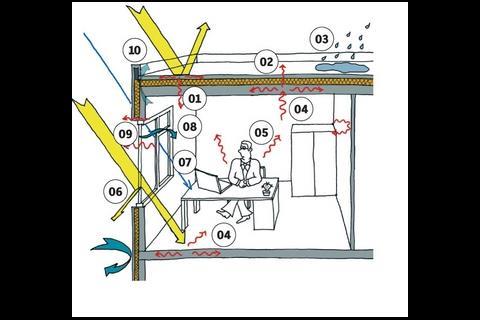 The building fabric responds to and moderates the environment in numerous ways:
1 Solar gains through the structure
2 Heat loss through the structure
3 Protection against the weather
4 Heat absorbed into the thermal mass
5 Heat gains from occupants and equipment
6 Solar gains through windows
7 Daylight for occupants
8 Ventilation for occupants
9 Heat loss through glazing and thermal bridges
10 Resistance to infiltration

In this regular series Professor Doug King of Bath University explains the principles of environmental design. This month he considers the building fabric and its influence on energy use.

In the first article of this series (BSD February 09) we looked at evaluating buildings to maximise the area that can be adequately conditioned by passive means without relying on m&e systems. This month I will discuss the role the building fabric plays in delivering this passive performance.

The fabric is simply the stuff that goes to make up a building; the structural materials and finishes that enclose space, separating inside from outside and internal spaces from each other. This includes all the walls, windows, doors, ceilings, partitions, roofs and floors.

Opportunities to engineer the building fabric begin during the pre-design phase and will fundamentally affect the final energy performance, just as decisions on the layout affect the passive/active ratio. An optimal design will provide significant reductions in heating and cooling loads, which in turn allow smaller HVAC equipment to meet the remaining demands.

In well designed buildings, the extra cost of high performance fabric will typically be offset by these equipment savings. And, as the environmental performance is passive and built in, it will not require maintenance or energy to operate, it will not break down and it will not need to be replaced during the life of the building.

The most important distinction to make in the building fabric design is between heavyweight and lightweight construction. The terminology codifies the differences in observed performance between traditional load-bearing construction of stone or masonry (heavyweight) and framed buildings with applied cladding and finishes (lightweight).

Traditional heavyweight construction responds slowly to changes in weather or heat loads, while lightweight buildings heat and cool quickly. The slow response of the former is the result of masonry’s ability to store large amounts of heat for a relatively small increase in temperature. The term thermal mass is used to describe the thermal inertia of heavyweight building materials, a simile for the inertia of a massive moving object, which takes a long time to get going or bring to a stop. We will look at the benefits of thermal mass in more detail in the next article.

Climate is probably the most important factor in determining the appropriate fabric. In the absence of any other influences, heavyweight buildings tend to stabilise at the average daily temperature. If there is a wide swing between day and night-time temperatures (diurnal variation), as in hot arid climates, heavyweight buildings work well – we see widespread use of thermally massive construction in vernacular housing in desert regions.

However, if the average daily temperature is well outside the comfort range, lightweight buildings will be more appropriate as they can respond rapidly to short periods of more benign weather. There is extensive use of lightweight building materials for vernacular housing in hot tropical climates.

It sometimes helps to distinguish between the fabric of the envelope and the interior surfaces. The envelope is the combination of those parts of the fabric – the roof, exterior walls and ground floor – that mediate between the external and internal environments, keeping out the weather and regulating energy flows in and out of the building. The interior surfaces are those that surround and are exposed to occupied spaces: floors, ceilings, partitions and interior faces of the external walls.

The envelope is the primary means of modifying the climate and providing the means to control the internal environment independently of the weather. In all but the most benign climates, insulation is required to limit the rate at which heat energy flows through it. This not only reduces the rate of heat loss in winter but the rate at which heat from the sun is transferred through the envelope in summer.

It is a simple rule that the envelope must provide a continuous shell of protection or leaks will occur. While designers are used to considering the envelope as a continuous weather shell, where leaks during rainstorms would be unacceptable, often little attention is given to the continuity of the thermal envelope or to the air-tightness of junctions between components. These potential escapes of energy will prove to be just as costly over the life of a building as water leaks.

However, insulation alone is often not enough. When the sun shines onto lightweight, particularly metallic, cladding and roofing materials they heat up quickly and their temperature can reach extremes. The heat is forced through the insulation by the large temperature difference between the cladding and the interior, typically much greater than the winter temperature difference for which the insulation was specified. In this case we also need thermal mass in the envelope to store excess heat until the outside temperature drops at night and dissipates the stored heat.

Further complications arise as the building envelope must be both sealed and permeable. Openings are necessary to provide access, create views out, balance occupants’ requirements for ventilation, daylight and solar energy and still provide thermal resistance and weather protection. It is common to try to solve all of these with a single component or layer. This does not have to be the case and in high performance facades there are often a number of layers to the envelope, each with a different function. Envelope design will be covered in more detail in a future issue.

In the winter this prevents the internal temperature from falling as far overnight and thus reduces the start-up heating requirement the next morning. In summer the release of this stored heat can be precipitated by circulating cool outdoor air through the building at night. This can even be used to cool the thermal mass below the comfort temperature in order to store some additional cooling capacity for the next day.

Conversely, buildings with highly intermittent occupancy, such as churches and sports facilities, would benefit from lightweight construction. This would allow the interior to be brought rapidly into comfort conditions after long periods of inactivity without having to expend large amounts of energy in bringing the building fabric up to the same condition.

It is clear that decisions made in the early stages of design with regard to the materials and construction of a building will have a fundamental impact on the size of the mechanical systems needed to control internal temperatures. The choice of building fabric will be driven both by the climate and the intended use of the building. The consequences of poor decisions about the fabric will be buildings that rely on HVAC systems and on energy supplies to make them habitable.