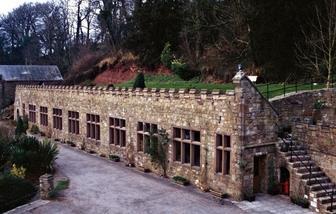 In the third of his series on environmental building design, Professor Doug King looks at thermal mass and how it can be used.

In the previous article I touched on how heavyweight buildings respond slowly to environmental changes because of their thermal mass ((BSD April 09). As thermal mass is quite often misunderstood, this month I look in more detail at this aspect of buildings’ thermal response.

Thermal mass is not a recent invention, as you might think from reading building case studies in the journals. The ability of dense masonry materials to absorb and retain heat is well known to anyone who has built a campfire ringed with stones, which remain warm long after the fire has gone out. It is this capacity to store heat that makes thermal mass useful in buildings. The Romans used thermal mass in hypocaust heating systems, and today’s electric storage heaters still use bricks as the storage medium.

Churches, the most familiar examples of thermally massive buildings, are typically comfortably cool in the summer and next to impossible to get up to a comfortable temperature using intermittent heating in the winter. The effect of thermal mass in buildings can therefore be understood to act to oppose variations in heat input. The term “thermal mass” is used to describe this inertia in a simile to the inertia of a massive moving object, which takes a long time to get moving or bring to a stop.

Thermal mass is the result of a combination of physical properties of materials, including specific heat capacity, density and thermal conductivity. Table 1 (overleaf) indicates the properties of common construction materials. Concrete has moderate specific heat capacity but high emissivity and relatively low conductivity, so it readily absorbs heat by radiation and the heat remains relatively localised within the material. Steel has low emissivity, meaning that it reflects radiant heat back into the space rather than absorbing it. Water has high specific heat capacity, which is why we use it in radiator heating, but requires mechanical systems to couple it to the internal environment.

Eutectics or phase change materials (PCMs), while not strictly thermal mass, deserve a mention as they are increasingly being used to replicate the effect of thermal mass in lightweight construction. Eutectics are chemical compounds that have been designed to freeze and thaw at environmental temperatures and can be used to store heat in a wide range of thermal storage applications, including within dry lining boards (thermal energy storage will be discussed later in the series).

Placing thermal mass in the various layers of building envelope can change its effect substantially. Bear in mind that, in order to act as a heat store, the thermal mass must be able to absorb energy from the source you are trying to moderate. Introducing lightweight material, such as dry lining or a suspended ceiling, between the occupied space and the masonry construction will negate the opportunity to use the thermal mass for passive cooling by absorbing heat from the interior.

In practical application in buildings, we are typically interested in the 24-hour daily cycle of occupancy. Heat generated during the day – by the occupants, by processes and equipment and by solar gains through the windows – is absorbed into the thermal mass. Given that the complete system has much greater heat capacity than air alone, the resulting temperature rise is lower than for a building without thermal mass. The surplus heat is locked into the thermal mass until the internal temperature drops, typically as a result of people leaving at the end of the day. The heat is then re-emitted, keeping overnight temperatures higher than they would be without the thermal mass.

In winter, this reduces the start-up heating requirement each morning. In summer, the release of this stored heat can be precipitated by circulating cool outdoor air through the building at night. This can even be used to cool the mass to the lower comfort limit in order to store cooling capacity for the following day. Even in comfort-cooled buildings this energy storage capacity can be used to reduce and delay the peak cooling demand, and can reduce the total plant capacity required if delayed far enough.

Much of the benefit of using thermal mass for passive cooling comes from the possibility of lowering the surface temperatures of rooms below the air temperature. Given the high emissivity of the mass, this allows occupants to lose heat by radiation to these cooler surfaces and this lowers the dry resultant temperature in the space (the temperature that we actually experience). So for the thermal mass to have maximum effect, there must be line of sight from the occupants. This means that the thermal mass in the ceiling and upper walls has a greater impact than that in the bottom of the walls and the floor; the line of sight to the ceiling is usually clear while that to the floor is typically obstructed by furniture. Of course, hot air also naturally rises so that it comes into greater contact with the upper portions of the room and can give up its energy to the mass by conduction.

Thermal mass is, in fact, a bit of a misnomer as it does not necessarily require a physically heavy construction to achieve sufficient thermal capacity for practical application. Over the course of 24 hours, the temperature variation creates a wave front that penetrates only about 50mm into the mass. Thicker constructions respond to progressively longer timescales until, at about 1.5-2.0m, the response becomes seasonal. This is why unheated cellars and caves, surrounded by the thermal mass of the ground, stabilise at 10-12C, which is the annual average of external temperature. Ground source heating and cooling systems, earth-sheltered buildings and underground thermal labyrinths all harness this fact. Effectively, the thermal mass of the planet provides a source of ambient energy which is warmer than the environment in winter and cooler in summer.

The Berm House at Caer Llan field studies centre, near Monmouth, built in 1988, is a classic demonstration of passive solar design with thermal mass. The south-facing windows collect all the thermal energy the building needs from the sun and the earth covering the roof is deep enough to isolate the building from seasonal temperature variations.

Insulation on the outside of the concrete structure, beneath the earth, leaves the thermal mass exposed internally to retain the absorbed heat, lifting the internal temperature to an extremely stable, year-round 19C.