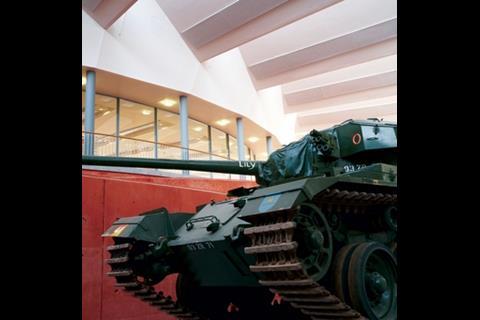 At the Tank Museum in Bovington, Dorset, narrow roof apertures create directional light, partly diffused by inter-reflections from the soffit. This good balance between diffuse and directional light illuminates the space and reveals the relief of exhibits. 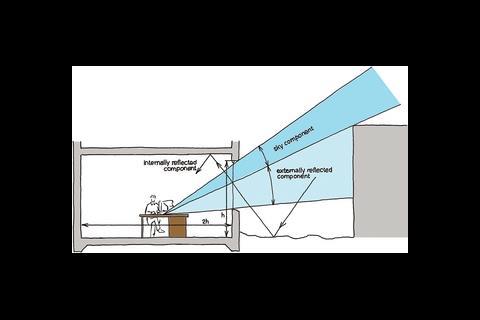 The calculation of daylight at a point on the working plane requires analysis of: the direct sky light component, which varies with altitude above the horizon; the light reflected from the external surroundings, which requires knowledge of the local environment; the internally reflected component which requires details of the finishes. However, as an alternative, the rule of thumb is that a room can be adequately daylit to a depth twice the height of the window head. 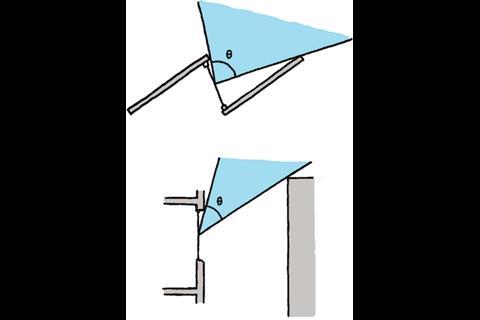 Figure 2: The average daylight factor in a room can be estimated using the equation: 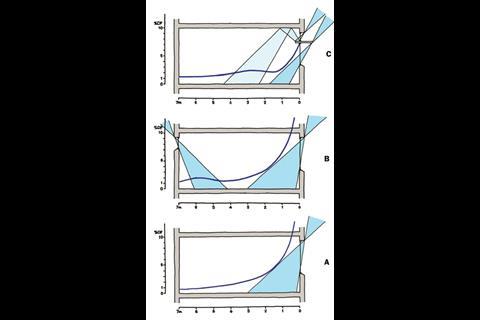 Figure 3: It is often necessary to balance daylight between interior and perimeter zones. In A, the blue curve indicates the daylight factor for a typical building with 30% glazing; the light level can vary by a factor of 20 or more across the room. In B, a small clerestorey light at the rear more than doubles the light level locally, reducing the variation to a factor of 10. In C, a light shelf intercepts some light from the perimeter and reflects it deeper into the room, reducing light levels overall but improving uniformity to less than 8.

In this regular series of articles Professor Doug King explains the principles of environmental building design. This month he introduces some simple tools for designing with daylight.

Light is fundamental in the design of the built environment, not only to provide illumination for people to safely and comfortably undertake tasks, but also to reveal the character of the architecture. Most people prefer natural light, and it plays a vital role in comfort; its variable nature regulates our biological clocks and it helps us to maintain psychological contact with the external environment. However, illuminance from the sky is difficult to specify compared with illuminance from electric light fittings and it is often passed over by designers.

Daylight and sunlight are often confused. Sunlight – direct light from the sun – is far too variable to be of any use in lighting design. The intensity can vary from 100,000 lux in direct sunshine to less than 10,000 lux when the sun is behind cloud. Daylight is diffuse light from the bright sky vault once direct sunshine is excluded. Levels of daylight available in various weather conditions are predictable and the variation in luminance with angle above the horizon can also be modelled. With this information a lighting designer can use daylight beneficially within buildings.

Although daylight is more predictable than sunlight, it is still sufficiently variable that quoting specific internal illuminance values is not usually helpful. Instead we express it in terms of the daylight factor. This is the illuminance within the building expressed as a percentage of the outdoor illuminance at ground level from an unobstructed sky. Daylight arriving at a point in the building interior is made up of three components, as shown in Figure 1 overeleaf: light arriving directly from the sky, light reflected from the surroundings and light inter-reflected within the building.

There are a several ways of calculating daylight in a building, including formulae, ray tracing with computer models, geometrical and graphical methods. However, it is often as useful just to be able to estimate the average daylight factor in a space in order to assess its likely contribution to reducing the need for artificial lighting. A method of estimating average daylight factor is shown in Figure 2.

In all daylit environments it is essential to include controls to modulate artificial light levels in response to the daylight; otherwise we will not achieve the potential energy savings. Experiments show that occupants are slow to respond to changes in daylight levels when it comes to switching lights on and off, so some form of automatic control is desirable. Daylight-linked dimming, using sensors to vary the electric lights to maintain a constant overall light level, is ideal as the lights will be on when occupants expect them to be on, but they will only be consuming a small proportion of their peak energy demand.

It is also possible to over-light the perimeter zone of a building when trying to achieve functional light levels from conventional windows, particularly as the plan gets deeper, thus creating a different problem. Increasing the window size to try to admit sufficient light for the interior will clearly mean significantly higher light levels at the perimeter. This may actually result in higher overall energy consumption as occupants try to balance the light in the interior with the perimeter through over-use of artificial lighting. Over-lighting the perimeter can also cause glare, so the blinds may be left closed with more or less constant use of artificial lighting.

Figure 3 shows some of the strategies for balancing light levels between interior and perimeter zones. Using a light shelf or reflector at the window is probably the best-known solution, although simple venetian blinds can perform a similar function if the blades are set at an appropriate angle. Other devices include prisms in the glass of the window to reflect sky light onto the ceiling while reducing the light level in the area immediately behind the window.

Quality of light is just as important as quantity. Daylit buildings are sometimes criticised as too bland, particularly when lit solely from diffusing rooflights. It is important to ensure the light has some directionality in order to create shadows. We can understand directionality by considering the extreme light and shade of direct sunshine compared with the flat character of diffuse light on a very overcast day. Achieving the appropriate balance between these characteristics of light reveals the richness in the form and texture of objects without creating undue glare.

The traditional saw-tooth rooflight, which evolved to produce good lighting in factories, retains some directionality in the light and so provides the modelling of surfaces essential for recognition of form and depth. Orienting the glazed part of the sawtooth north also maximises daylight penetration without the problems of direct sunshine. Depending on quality of glazing, such a design can provide daylight factors as high as 20% giving internal illuminance of 1000 lux on an overcast day, more than enough for the most demanding tasks.

Designers often shy away from daylight as being too complicated to design with. However, with a few simple tools it can be used to make a big contribution to reducing a building’s carbon footprint. And, by using it sensitively, we can enhance the experience of being in the building.