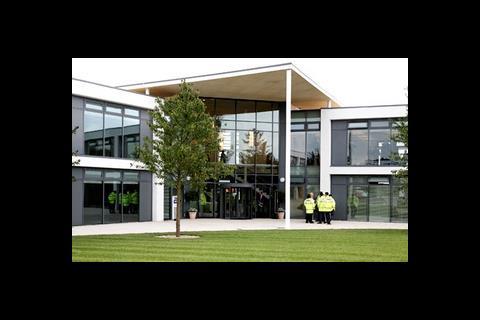 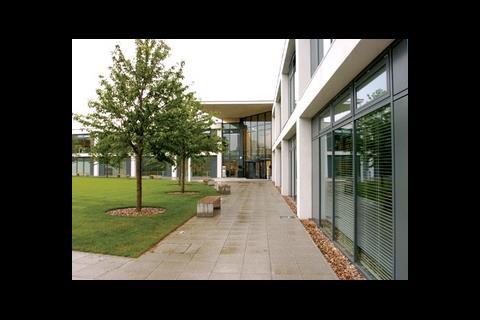 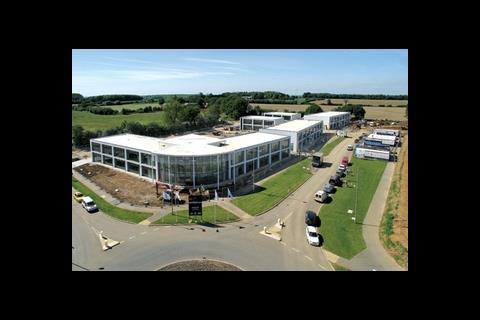 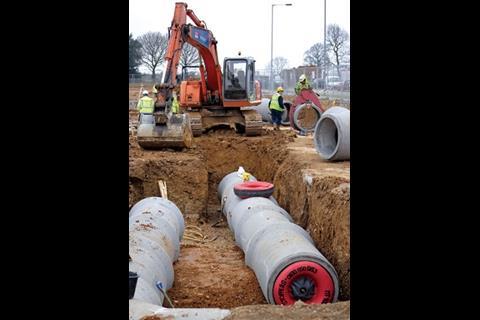 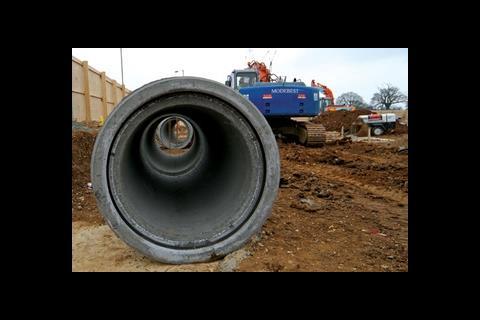 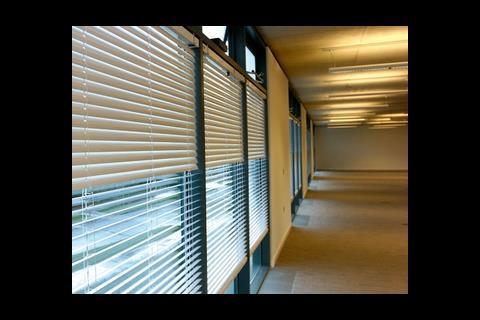 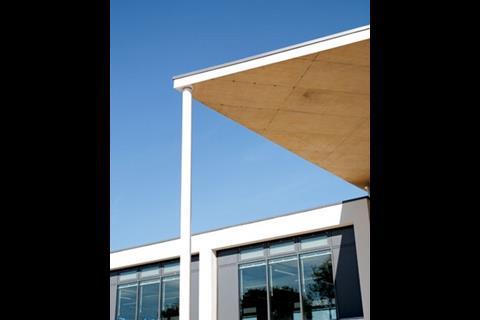 Beneath an office village in Luton lies a system of concrete pipes that promises to supply fresh air using a fifth of the energy of a normal fan-coil system. Roderic Bunn salutes its simplicity

It wasn’t long ago that a speculative office building had to have a long list of technical features. The Village at Butterfield business park in Luton, Bedfordshire, has some ducts in the ground, some air-handling units, some fans and – well, that’s it, more or less. So is this what building services is coming to?

With a bit of planning, yes. Complexity, as we know, is not a virtue. Particularly that brand of unmanageable complexity that baffles occupants, defeats building managers and consumes copious amounts of energy. Some environmentally sound buildings are full of biomass boilers or heat pumps running off boreholes, but that stuff can be difficult to install, commission and run. Keep it simple and do it well is the new mantra. Butterfield is simplicity in 3D.

The Butterfield Business and Technology Park has been created by Easter Developments on the outskirts of Luton. Phase one – the Village – comprises two-storey 400-800m2 office blocks designed by Hamilton Associates and consulting engineer Atelier Ten.

The smart bit has been less in the doing, and more in the thinking. Using the stable temperature of the ground to heat and cool incoming ventilation air requires good knowledge of thermodynamics, plus a lot of computer modelling to get it right.

Atelier Ten has a lot of experience with exploiting thermal mass to temper ventilation air, having used thermolabyrinths – serpentine airways created through subterranean concrete mazes – for buildings as diverse as the Davies Alpine House at Kew Gardens and Federation Square in Melbourne.

A simpler alternative is to use earth ducts radiating into a building from the surrounding area. This uses a concrete or steel-lined ventilation tube, buried about a metre underground, to bring a building’s ventilation air into contact with the thermal mass of the earth.

Off-the-shelf products offer the most sustainable way of building an earth duct. Concrete drain sections provide excellent thermal mass in themselves, are non-corroding and can be sealed against water ingress using proprietary gaskets. The slightly porous nature of the concrete also helps to control humidity. Atelier Ten used 900mm diameter prefabricated concrete pipe for buildability reasons. The intakes are prominent circular devices dotted around the site. They have heavy metal mesh to keep out animals. Hatches at each end give access for maintenance and inspection.

Heat transfer between the air and the earth duct wall is best with turbulent flow, something that smooth concrete pipes don’t encourage. For this reason, Atelier Ten’s thermolabyrinths are often constructed from ribbed concrete panels. At Butterfield, the earth pipes were put through three or four 90º bends to encourage non-laminar flow and heat transfer.

The firm originally modelled the earth ducts using Tas, which at the time was the only suite with an earth duct program. The consultant now uses IES with a modified weather file based on ground temperatures. “Modelling the effects of varying the airflow rates is the tricky part,” says Bellew, “but we have a little macro that can handle that.”

The supply air is drawn from the air intakes around the site and through the concrete pipes to air-handling units in each wing of the office development. The air is heated if needed (but not mechanically cooled) by some recirculation and a low-pressure hot water heater battery. (Thermal wheels were omitted on cost grounds, but have been reinstated for the phase two development.)

Supply air is injected into the floor void and from there into the office zone from swirl floor diffusers. Design air volumes range from about 1.5 air changes per hour in winter to about 4 in peak summer conditions.

The extract path from the open-plan offices became subject to value engineering, which led to the omission of extract ductwork that would have run down the central spine of the offices, removing vitiated air near the source. This was replaced by a simple air return grille high in the wall adjoining the air handling plantroom. It will work, of course, as the air volume rates are the same no matter where the point of extract, but how effectively it works at relieving stuffiness when partitions go up is another matter.

The expected energy savings over conventional air-conditioning systems are quite considerable. A typical fan-coil air-conditioning system can consume about 225kWh/m2 a year for heating, ventilating and mechanical cooling. Atelier Ten believes the earth duct approach could bring the Butterfield complex down to 45kWh/m2 annually. If phase two is fitted with thermal wheels, energy consumption could perhaps drop to 28kWh/m2.

The office floor plates themselves are simple 13m deep zones. They have unpainted exposed soffits (for the thermal benefits) and well-engineered facades with openable windows and motorised internal blinds.

The facades are the only highly detailed element – and rightly so. The thermal insulation is about 30% better than the 2002 Part L requirements, according to Bellew, and therefore about equal to the 2006 requirements. A typical window bay has an insulated panel at each end, so the actual glass area is only about 40%. A PIR-based lighting system has been adopted, with daylight linking control for the first two rows of T5 fluorescent lights near the windows.

One in five of the clerestory windows on each elevation is motorised, under the control of the building management system. The control strategy is to relieve peak summer conditions and to augment the mechanical ventilation system.

There is always a temptation, particularly with design and build, to reach for the simplest and cheapest methods of solar and glare control and also to value-engineer the ventilation controls to the point where it becomes marginal and risky. The Village has suffered a bit of this, in that the external shading was cut on cost grounds (except for the central wing, where it was really needed). This placed more emphasis on the quality of the internal blinds.

The design team approached this with a commendable attention to detail. The Venetian blinds on the east- and south-facing elevations go up and down in the usual fashion, but the occupants can also rotate the blades in the lower section of the blinds independently to those in the upper section. This means daylight can enter at the top while the users can cut out glare at the bottom.

The German-made blinds are also motorised on the east and west elevations so that the BMS can set them to limit solar gains early in the morning (which also serves to reset the blinds from the previous day). Atelier Ten’s modelling simulations showed significant risk of overheating between 6am and 9am. On other elevations the windows are controlled manually.

The first phase of the office village, completed last October, won the green development award at the 2007 Office Development Awards. Occupiers include Royal Bank of Scotland and Bedfordshire University.

Although the buildings have yet to experience peak summer conditions, the client is sufficiently happy with the system to adopt it for phase two, a 9000m2 mixed office and r&d space.

Thus far the only mechanical cooling is that installed by tenants for server and communications rooms, the unsightly heat rejection equipment already being located rather inelegantly by outside walls. There is a certain inevitability about that, but at least no cooling coils have yet been fitted in the air-handling units (although space has been provided).

Everyone involved learnt how not to dig the trenches for the earth ducts. “The idea was to carry on building the buildings at the same time the trenches were excavated,” Bellew recalls, “but by the time we had criss-crossed the site with trenches, it all became a quagmire and caused a few problems. They also started at both ends and arrived at the middle, which meant they ended up with a big bog. The next time we do this, we’ll probably work outwards from the site.”

One of the interesting aspects of the earth ducts is that they could, theoretically, outlive the buildings and be used to serve the next generation built on the site. This makes earth ducts even more sustainable. “Even high-efficiency air-conditioning machinery will be replaced within 15 years,” Bellew points out. “Here, we just have a small fan in an air-handling unit and that’s it – no chillers.”

What criteria do I need to design a earth tube or thermal labyrinth?

A thermal labyrinth (or earth tube/duct) involves coupling a building’s ventilation system to the ground, writes Roderic Bunn. Incoming air drawn through the system can be cooled or heated by the surrounding thermal mass, removing or significantly reducing the need for boilers and mechanical cooling systems.

Earth-coupling can be done by constructing a concrete maze or labyrinth beneath a building through which ventilation air can be drawn, or by burying ventilation ducts made from prefabricated concrete or steel sections.

Ventilation ducts require access to, and excavation of, land around the building. Labyrinths can be constructed as undercrofts but require more structural engineering and will need to be purged of heat built up during the day.

In general, the following design criteria apply in the UK: