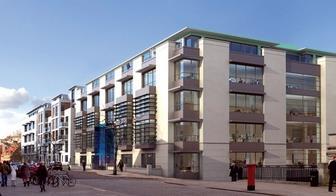 Hoare Lea was the services engineer for the project.

EA chief executive Paul Leinster said: “By relocating to a more efficient building the agency will save around 10% every year on operational and energy costs, an estimated £180,000 saving per year.”

EA staff now scattered across three sites will begin moving into the new office late next year, with official opening of the building in April 2011.

The agency’s 6500m2 office is part of a mixed scheme by developer Westmark which includes 78 apartments and a second, smaller office development.