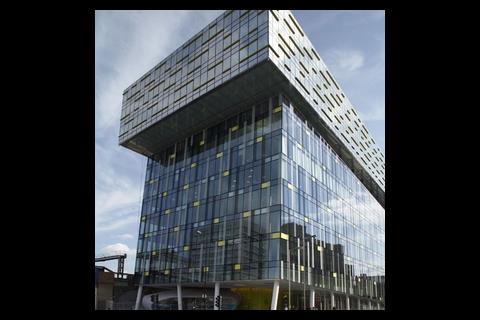 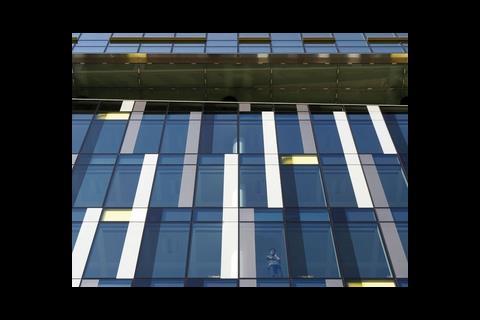 The relationship between building envelope and air-conditioning is an influential factor in office costs, says Davis Langdon Mott Green Wall

T he glittering glass towers that have become symbols of corporate power could soon be overshadowed by buildings that say more about corporate responsibility. More opaque and perhaps more heavyweight office buildings, with greater attention to architectural detailing, are likely to appear as developers and occupiers recognise the advantages of lower-energy buildings with higher BREEAM ratings.

The building envelope solution provides an interface between the controlled internal environment and the variable external climate. It must accommodate a wide variety of criteria in addition to environmental performance, some of which may appear contradictory.

With naturally ventilated and/or mixed-mode buildings, indoor temperatures follow the diurnal pattern of the outdoor temperature and solar radiation. This relationship is influenced by the building orientation and form and the optical and thermo-physical properties of the envelope. In an air-conditioned building, the properties of the envelope determine the amount of cooling required.

The envelope must also dovetail with other project-specific criteria, such as architectural intent; buildability, including long-term maintenance; and procurement (ensuring it can be built by a wide range of contractors, to ensure best value).

Heating and cooling loads need to be limited in air-conditioned buildings to keep the mechanical plant within the CO2 emissions levels set in Part L2 of the Building Regulations. The regulations give guidance on maximum energy gains and losses through the facade, notably heat loss (U-values), management of solar gain

(G-values) and the reduction of air leakage. This emphasises the need for a co-ordinated approach to services design and the building envelope from the outset.

The building envelope must be capable of reacting to seasonal conditions. In winter, solar gain may be considered a benefit in providing passive solar heating, whereas in summer the G-values should be controlled to prevent overheating. This is important for “sealed box” office schemes in city centres, which are cooled for most of the year because of high occupancy, computers and artificial lighting.

U-values should be balanced to prevent condensation and low surface temperatures, which can cause discomfort by radiant cooling or by creating cold down-draughts. This can be a particular problem for facades with large glazed areas. The U-value should also ensure that external heat transference to the inside is reduced and, conversely, any internal heated air is not trapped inside, which could impact upon cooling loads.

Solar control is, therefore, a significant element of the building envelope design. A variety of solutions is available, including cost-effective coatings on the glass, aided by increased-height insulated spandrel panels or a possible further increase in solidity. Costlier solutions include external brise-soleil or ventilated cavity curtain walling with motorised solar control blinds.

Adjustable external shading is considered more energy efficient than the relative inflexibility of fixed shading systems, but both attract a cost premium because of higher initial capital costs and operating costs, exacerbated by the increase in facade zone depth and consequent reduction in net floor area. Value-engineered building envelope designs often entail fixed shading solutions, with horizontal fins for south-facing elevations to combat high-angle sun and vertical fins for east and west orientations to accommodate lower-angle sun paths. North-facing elevations generally do not require solar control measures. It is common to use glass with a high-performance coating to improve the effectiveness.

Other factors to consider with fixed shading include:

Each has a maximum cooling output relative to the performance of the plant and equipment. Once the internally generated heat gains, from lighting and occupants for instance, have been taken into account, the remaining system capacity must deal with the solar gain. This dictates how hard the facade has to work in reducing heat gain to a level that the air-conditioning system can deal with. This could result in an expensive, high-performance glazed facade or one with smaller windows and a heavier structure. While perhaps an oversimplification, it does essentially describe the process.

The figures are derived from the typical available steady-state capacity of each air-conditioning system. Internal gains for occupants, lighting and small power are first subtracted based on British Council for Offices guidelines and assuming no daylight control on lighting.  An allowance for fabric/infiltration is also subtracted, leaving a net available system capacity for absorbing solar gain into the space. This solar gain capability is then translated into an allowable solar gain expressed as W/linear metre of facade, based on a typical perimeter office. This enables the figures to be independent of facade height or glazing area.

The G-values (which can be defined as the coefficient of permeability of total solar radiation energy) are derived by taking a typical incident solar radiation value on a 2.6m high facade panel and calculating the percentage of this energy that may be transmitted into the space to meet the solar gains per metre of facade set by the first process.

Table 2 details the facade solutions proposed for each system that can satisfy the criteria outlined in Table 1, ranging in cost and specification. It assumes a typical 1.5m module width unitised curtain walling solution for a storey height of 3.8m and with a vision glass area of 1.5m wide x 2.6m high, in line with Table 1. This assumes a 1.2m high solid spandrel panel.

The table demonstrates how the variety of G-values is achievable with different envelope solutions, based on a variation on theme from a base unitised “chassis” solution, taking performance, architectural intent and cost into consideration.

The building envelope solutions adopted in the table are representative of typical commercial office schemes. Clearly there is a variety of subtypes, which could impact upon cost, architectural intent, buildability, efficiency, net floor area, etc.

It can be seen that different facade options, ranging from the cost-effective to the relatively high cost, can satisfy the set performance criteria. The same solutions may, in some cases, be appropriate for more than one air- conditioning system.

How the Palestra building's cladding was developed

The dramatic raked facade of SMC Alsop’s design for the Palestra building in south-east London is based on a conventional double-glazed flush wall with spandrel panels and vision panels. However, the task for Buro Happold’s facade division was made far more complex by the use of four types of fritting on the vision panels and four kinds of shadow boxes, to provide the appearance of depth and colour. There is clear glass on the outside pane, then an air gap, then a metal panel in dark grey, silver, yellow or mirror-finish stainless steel. U-values for the glass average 1.31 mid-pane, and 1.91 with the frame, while the spandrel panels achieve 0.25. The system was custom-made by Permasteelisa, based on one of its standard products.