Replacing former RAF accommodation on the Falkland Islands has meant working in extreme weather conditions and freezing temperatures for the Royal Engineers. And that was only once the 8,000-mile supply chain had been meticulously dealt with 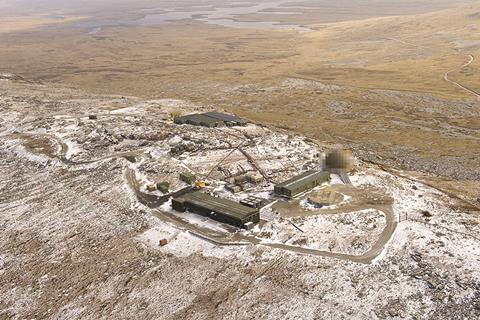 The fragmentation of supply chains in construction is often spoken about. But it’s not very often that a supply chain starts in a cathedral city in England and ends 8,470 miles away at the top of a mountain on an island in the South Atlantic.

For the past 15 years, the Royal Engineers (RE) have been busy building patrol bases and defusing roadside bombs in Afghanistan and Iraq. More recently they have been building medical facilities in Sierra Leone, all usually done in blistering heat.

Today the engineers are just 500 miles short of Antarctica, in a wind chill of minus 40 degrees. Wind speeds are such that the few trees on the islands grow horizontally. This is a summer tour for the men and women of 21 Engineer Regiment.

Built by the Royal Engineers to house the RAF’s radar operators after the conflict with Argentina in 1982, the 34-year-old structures have finally succumbed to the extreme weather. So why are the RE delivering a commercial project on a bleak archipelago in the South Atlantic?

In short, the RE persuaded the client on the scheme, the Defence Infrastructure Organisation (DIO) that they could carry it out, in a commercial style contract, and maintain equivalent standards to that of a contractor.

As well as providing better value for money for UK taxpayers, the project gives RE personnel a chance to work in a different environment and reclaim skills that may not have been demanded in their postings over the past decade and a half.

The deputy head of DIO projects, David Graham, says: “DIO’s primary role is to ensure that our armed forces have fit-for-purpose infrastructure to meet the demands we as a nation place upon them. This project is a fine example of how we’ve met their needs in what is a hugely challenging environment on a number of levels.” 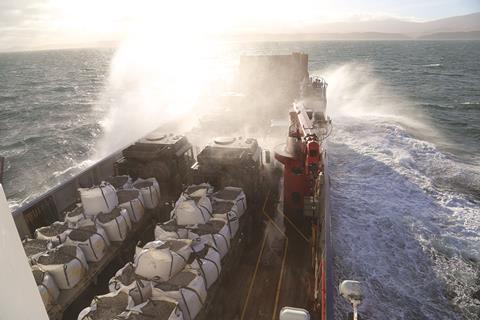 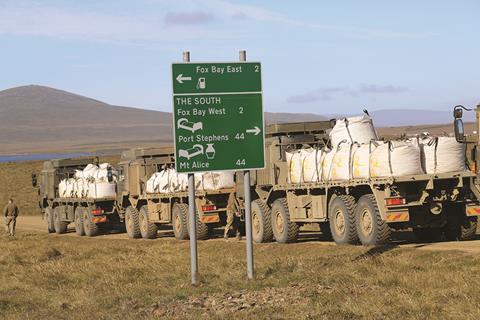 Anemoi - which, appropriately enough for a project on the Falklands, comes from the Greek for wind gods - brings together the many elements that make up the RE.

The Military Design Authority for the scheme is 518 Specialist Team Royal Engineers (STRE) and its task is to turn the concept design, produced by Ramboll UK, into a costed design-and-build project for the DIO.

The project will provide permanent single-storey accommodation for the next 30 years. It is being built in five phases over three years and will involve many of the 8 Engineer Brigade units.

The sub structure is being built by 21 Engineer Regiment and their elements of work include the construction of 20m x 50m raft and beam foundations, internal and external drainage, walkways and stairs, gabion baskets, sewage treatment foundations and sewage treatment plant access track, plus the lightning protection system.

There are significant complexities over and above the weather, such as achieving the required concrete strength; geology, including ground water issues; and historic unknowns in the ground.

Building to British Standards, combined with no natural construction resources and no manufacturing base on the islands, dictates that all materials, plant and resources - with the exception of type 1 stone - have to be procured in the UK.

While the procurement of materials is a fairly routine operation, the task of getting the right materials, in the right place, at the right time, is another matter. Squadron echelon commander, Captain Tony Davies says: “For me this is a logistics project with a little piece of construction tagged on the end.”

Phase 1, the sub structure work, required all construction products to be delivered to the camp at Ripon in North Yorkshire, where they were packed into sea containers for their journey south. 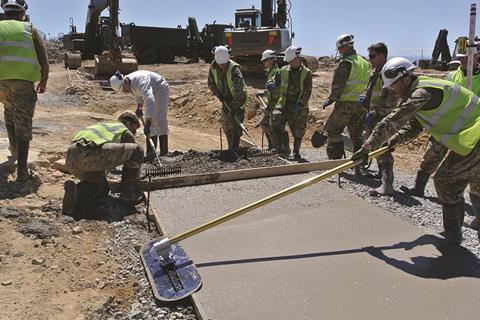 Every item is checked and rechecked before beginning the first stage of its journey to the army’s sea mounting centre at Marchwood, near Southampton. The journey to the Falklands takes six weeks, with a ferry leaving for the islands every five or six weeks.

The RE are only allocated space for 70 containers, which they double stack and once they get to Mare Harbour at East Falkland they are taken ashore for government inspection and screening for biohazards.Once checked, the army gets to take them to their logistics base some 35 miles from Stanley, the island’s capital. Mount Kent is close but Mount Alice and Mount Byron are still some 220 miles away.

Counting bags of sand, cement and rebar is laborious, with the biting cold wind making the job even more difficult. It is a thankless but necessary task. From here the materials start their journeys across the Falklands to site. It is far from straightforward. There is an hour-and-forty-five-minute ferry ride across Falkland Sound to take materials to Port Howard on West Falkland.

The roads on West Falkland are a mix of metalled roads and farm tracks, which make it a slow and painful drive for the trucks and their 12-tonne cargoes.

The RE tradesmen tying rebar, building shutters, and batching concrete are all in good form. They are enjoying both the challenge of the environment and the chance to do what they were trained for. On Mount Alice, with the Southern Ocean in the distance, Sergeant Dale Simpson is watching his team lay bricks and tying rebar in near freezing conditions where even on a bright summer’s day, temperatures rarely get above 10 degrees. 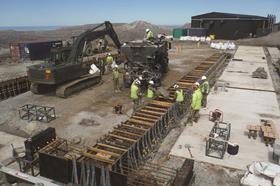 “The years in Afghanistan have created a degree of skill fade in some areas of our capability,” Simpson admits. “To address this, everyone deployed went back to basics and refreshed their skills.”

They have been helped by some of the professionals working on the job including reservist Staff Sergeant Iain Charnley, who is a QS for Willmott Dixon in his day job, who assisted with the pricing and procurement phase. Meanwhile, lieutenant-colonel Miles Delap, a partner at Gardiner & Theobald, has been assisting with the programme and commercial integration of Anemoi, acting in a role similar to that of a non-executive director.

The RE have had to develop skills that are commonplace in the commercial world, namely programming and cost management - and they are making progress. Will there be a direct comparison on cost with the private sector? While labour, plant and material can be calculated, the assistance from the wider military community on the Falklands and at home is harder to quantify.

The feeling is that RE have to be praised for taking the risk on new ways of working, although it could be argued, only the public sector can take this sort of risk. Internally, the RE would argue that project Anemoi is rewriting the way it conducts its business. They are learning how to integrate their expertise with that of outside agencies and how to deliver a project against a contract.

There is a way to go to completion, which is due in early 2018. Other RE units will complete the next phases and lessons will still need to be learned. The one question already being asked is would the DIO and the RE do it again? Yes, is the most likely answer. But perhaps not quite so far from home.

Gary Sullivan OBE is chairman of construction logistics contractor Wilson James. He is also a colonel in the Engineer & Logistics Staff Corps

Who are the Royal Engineers?

The Corps of Royal Engineers, usually just called the Royal Engineers (RE), are commonly known as the sappers. They are the built environment experts for the armed forces, providing design, research, construction and destruction knowledge. They provide combat engineers bringing bridging, explosive and infrastructure expertise: