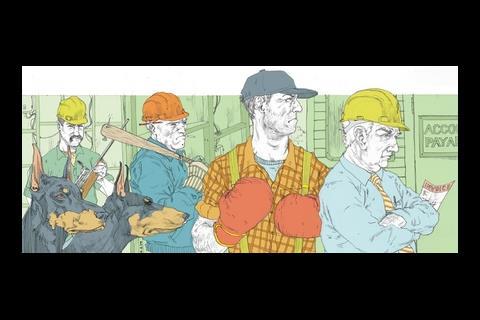 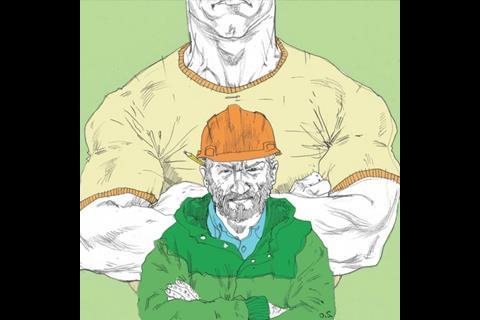 Hell hath no fury like a subbie spurned – by someone higher up the food chain who owes him dosh. Dan Stewart studies the age-old problem of separating an employer from his money

How do I get paid? Dogs. We have a part-time position in accounts looking after them,” says one builder when asked how he chases late payments. Although the idea of setting the dogs on Carillion is clearly a joke, specialist contractors might be forgiven for believing it. Keeping your balance sheet steady is still a near-impossible task.

“It really is one of the most complicated industries to get paid,” complains Graham Lyle, financial director of M&E firm EIC. “There are so many variables, and nothing is ever black and white.”

Walking off site can be unwise – “They’ll just get someone else,” points out Luke Wessely, managing director of Allen Roofing – but there are ways of letting a contractor know you’re unhappy with them ...

1. Keep the scaffolding up

Alan Buchan, director of the Confederation of Roofing Contractors, says one of his members wasn’t getting paid, so after completing his contractual obligations, he refused to take the scaffolding down. “He kept it up for four weeks. The client was livid, furious, but he was perfectly within his rights.”

Buchan says that so long as you’re performing the works in the contract, you can go as slow as you like: “You can put one man on a big job, and keep him there until payment comes through. He might get a bit lonely, but at least he’ll get paid.”

Subcontractors are divided on the politics of asking for a credit check beforehand. Some say its an insult to your employer.

But EIC’s Graham Lyle disagrees. “We would always perform a credit check if we didn’t know who we were dealing with,” he says. “It shows professionalism. I don’t take it as an insult when people ask it of us.”

5. Get guarantees in writing

Companies should be able to provide a statement from the bank giving security for the contract, or a parent company guarantee. “We insist on a written guarantee which will stand up in court,” says one specialist.

If you’re on a job where most of your work is done before you go on site and you have to order materials, then you could ask about getting payments before you start. Why should your company take the risk for their project?

One interior specialist remembers ringing a client to ask why he hadn’t been paid, only to be informed by his secretary that he was taking extended leave, and wouldn’t be back in the country for weeks. But we haven’t been paid, said the specialist. I’m sorry, she replied, but there’s nothing we can do.

“We still had access to the house,” he says, “so we went round and took the engine out of the boiler.” A few weeks later, the enraged client rang to find out why his house was cold and damp, only to be told he’d have to pay up to get his engine back. “He’d probably have been better off buying a new boiler,” chuckles the specialist.

8. Have your spies out

Call your mates, keep your ear to the ground or pay a visit to other jobs managed by that contractor. “You can tell a lot by visiting the site,” says one specialist. “If it’s quiet and everyone looks downcast, then it’s probably not great. If it’s busy and there’s a lot going on, then it probably is. Simple as that.”

Once upon a time it wasn’t unknown for builders to turn bailiff. One contractor remembers paying an intractable client a visit 15 years ago. “Another bloke – he looked like a brickie – was coming down the stairs with the company photocopier, and I remember thinking we’re not going to get a thing,” he says. He and a colleague went into the common room, hoping to find something to swipe. A full-sized pool table stood in the middle of it. They did their best but it wouldn’t budge so they decided to cut their losses and play a quick game. “Most expensive game of pool I’ve ever played,” sighs the contractor.

“It’s a human industry, and sometimes things take a personal development,” says Allen Roofing’s Luke Wessely. “In that situation, you have to challenge what [the director’s] reasons are, and plead to his better judgement.”

Geoff Dennis, financial director of specialist contractor Lakesmere, agrees: “If we ever have an issue with tardiness, I will always get onto their financial director, rather than resorting to adjudication. At the end of the day, if you’re doing the work properly you should get paid.”

11. Have a dirty protest

A cunning contractor – who wishes to remain anonymous – was doing electrical work on a residential project and payments were continually held up. He decided to take action. He bought a bottle of yellow food dye and emptied it into the house’s water tank, fooling the client into thinking there was something seriously wrong with his water supply. When the truth came out, the client angrily turned on the contractor. “Do you really think I’m going to pay you now?” he spluttered. “Yes … or next time it won’t just be yellow water,” said the bold subbie.

The cheque arrived the next day.

“You can cut out the middleman if you know the developer,” says Luke Wessely. “If you go straight to the source and say ‘Listen, these charlies aren’t paying me’, then that can happen.”

But Martin Burton, accounts manager of heating engineer Sladdens, says that unless your relationship with the client is extremely good, they’re just as likely to shrug their shoulders: “I think they’d say listen, this isn’t our problem,” he says. “Your contract is with them, so get them to pay you.”

“It was a few years ago now,” recalls Martin Burton, “but once we had to blockade an office with the van. A client wouldn’t pay up, so we blocked the entrance to the car park.” The contractor shared a car park with several other companies – a queue of cars built up and the air was soon full with more car horns than on Cup Final day. Eventually, a red-faced accountant with a cheque book came out, and Burton got paid. “Those sort of things don’t happen anymore though,” he hastily adds.

Most of the specialists interviewed for this article remember a time when business would occasionally be sorted out with the aid of a 2×4, but only one admitted trying anything like it himself. “I asked a couple of lads from the local rugby team to pay a visit with me,” recalls one anonymous builder, though he’s careful to concede that it was only because the client was a “dirty fella”. “They took one look at these two blokes and paid up,” said the builder.

Nine times out of 10, a well-written letter threatening adjudication can prompt the most reticent contractor into coughing up. “Companies realise adjudication costs money on both sides,” says Martin Burton. “Why would they want to risk that?”

Getting your case heard in the county court for debts of under £5,000 is quick and relatively easy, and you don’t need a solicitor.

You should aim to have a maximum 30-day payment period. Two- and three-month payment cycles increase the risk of falling victim to upstream insolvency. One roofing specialist says there is a large contractor that consistently demands a 60-day extension to the standard 30 days. “Ninety days! No-one should have to deal with that,” he says. “We tell them to find someone else. The sad thing is they always do.”

Do you have a painful payment story you want to share? Comment at www.building.co.uk by clicking on ‘what you think’ and selecting this article