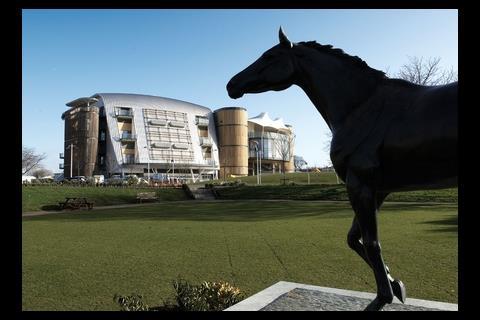 The theatrical new grandstands sit in the gaze of Aintree's famous statue of the Grand National’s only triple winner, Red Rum 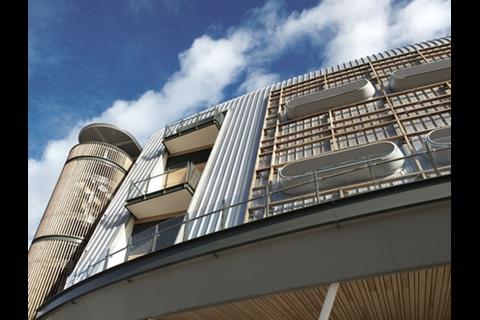 Zinc cladding sweeps down the backs of the grandstands, overlayed by timber trellising for climbing plants and accompanied by stair towers behind rough-sawn larch boarding 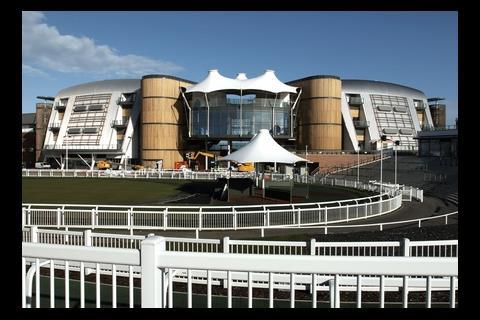 Seen from beyond the new ring for parading horses, the sculptural grandstands and their central linking block exhibit all the verve and excitement of the Grand National 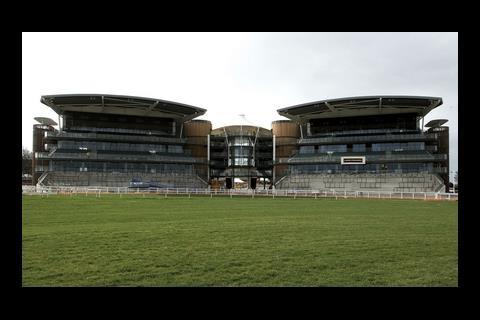 From the racecourse, straight runs of clear glazing give unobstructed viewing from the open terraces and enclosed hospitality suites behind 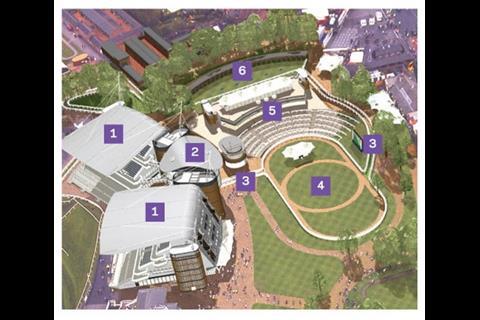 Aintree’s makeover doesn’t have much in common with the troubled Ascot redevelopment – or any other stadium for that matter. Martin Spring checks out the view from BDP’s flamboyant grandstands

If one UK sporting venue rivals Wembley stadium in global recognition, it is Aintree racecourse in the northern suburbs of Liverpool. For just three days every April, the Grand National attracts an amazing 600 million viewers across the world, more than any other horserace in history.

As a result, Aintree’s buildings are on show nearly as much as the horses themselves. Until very recently, though, the potential of the architecture to promote the event was lost on the racecourse owners. The four existing grandstands were about as inspiring as a 1970s business park.

But no longer. At last, the excitement of a top horse race is properly expressed in Aintree’s two latest grandstands, which are being finished in time for this year’s big race on 12 April. As designed by Building Design Partnership (BDP), the identical twin buildings come in bold, bulging, sculptural forms. “We’ve avoided the usual structural expression of sports stadiums and gone for something more theatrical instead,” says project architect Andrew Capewell.

Departing from the norm may prove a wise move. The last major racecourse grandstand to be completed, Ascot in Berkshire, hit the headlines after race-goers complained of obstructed views, and £10m of remedial work had to be undertaken (see box, page 44). The contractor on that project, Laing O’Rourke, was also responsible for building the Aintree grandstands.

But, as Capewell says, Aintree is a very different animal. At the back of each grandstand, shiny zinc cladding curves round the eaves and sweeps down a steeply sloping rear wall. On either side rise two drum-shaped stair and toilet towers clad in rustic rough-sawn larch boarding. The sharp contrast between the zinc and the timber will eventually be softened by creepers growing up through trellis attached to the rear walls.

The architectural flamboyance intensifies in the central link block – a bow-fronted glazed bridge that crosses the wide, open-air gateway to the racetrack. The bridge is capped by the four circular peaks of a white tensile-fabric structure.

The trackside of the two grandstands is more subdued. It consists of three tiers of open-air terracing for standing at ground level and, interspersed by three balconies, sitting up above. Clear glazing is used around the tiers and balconies: for balustrading at the front to maintain a clear view of the racetrack, and for window walls behind the balconies enclosing hospitality suites. Overhead, shelter is provided by large steel canopies that cantilever forward and curve gently like the peaks of two baseball caps.

It is the gateway formed by the two grandstands that is the USP of BDP’s scheme. It serves as a processional arch through which the horses are led to the starting line. At the end of each race, the procession goes into reverse when the six winning horses are led back through the arch to their paddock. In this way, the arch turns two key acts of the racing ritual into colourful spectacles with the horses, fittingly, in the lead roles.

The horses’ processional route is also the centrepiece of a wider £35m masterplan for the racecourse drawn up by BDP. The problem was that horses being led to and from the races crossed paths with the spectators streaming towards their grandstands. In an earlier phase of the upgrading completed last March, BDP built a minor complex devoted to the horses. It consisted of saddling boxes, jockey’s changing rooms, a glass-fronted weighing room and a paddock, or parade ring, with a media centre thrown in below the weighing room. As the two-storey building is curved and terraced where it overlooks the parade ring, these combine to form a compact amphitheatre for viewing the horses. Then, before the race, the horses and jockeys are led for another 100m between two steel fences and through the arch to the starting line.

The internal layout of the two new grandstands is largely dictated by their particular relationship to the racetrack. They have been allocated no-brainer sites plonked on to the end of a row of three existing grandstands, and this has left them overlooking a sharp corner in the racetrack. However, this turned out to be a fortunate location, partly because it set the two new stands slightly back from the track and partly because the track stretches out at sharp angles in both directions, rather than passing straight across from side to side.

This saved them from being blighted by the low viewing angles that have afflicted the much wider grandstand at Ascot. As a result, the tiers have been given relatively gentle rakes and even accommodate circulation aisles that lead sideways to the lift and stair towers flanking each grandstand. Tony McGuirk, BDP chairman, describes each grandstand as forming “a giant perch” for viewing the races.

At the same time, shifting vertical circulation to the sides freed up the rear portions of the grandstands so they could be entirely devoted to bars, hospitality suites and their kitchens. Given that Aintree stages races for a mere seven days a year, conferences, exhibitions and other receptions are vital to the commercial viability of the racecourse. When the open terraces and enclosed rooms are used simultaneously, the two grandstands together accommodate a total of 6,700 spectators.

Hospitality suites range in size from 20-seater private boxes on the top storey to a capacious 600-seater dining hall on the first floor. The two larger hospitality halls are enlivened by dramatic wave-like ceilings of wide plaster strips that rise sharply from the rear walls before curving up and over to drop down to the window wall facing the track.

The two saddle bars that occupy the bridge link between the grandstands resemble crush bars in a theatre. Both are triangular in plan and have curving window walls overlooking the horse’s parade ring at the back and their processional route passing directly below, while the upper bar beneath its fabric roof evokes an marquee in a country fair.

Other than the distinctive ceilings in the larger halls, the interiors of the two grandstands consist largely of narrow corridors with right-angled corners and standard-issue doors and fittings in American oak. The ambience is one of bland, corporate hospitality, as in a commercial conference centre, which is at variance with the theatrical forms and arresting materials of the exterior.

No doubt this note of blandness is a legacy of the fixed-price design-and-build contract awarded to Laing O’Rourke. More encouraging is the fact that the theatrical exterior of the two stands have both escaped such drastic value engineering. This shouldn’t be lost on those 600 million viewers across the world.

Construction sprints between races No cancellation of its hallowed annual Grand National was permitted by Aintree racecourse. Instead, the £35m redevelopment was split into two construction phases of 43 weeks sandwiched between 2005 and 2007 and separated in the middle by last year’s race.

Timescale challenge “Without doubt timescale was the biggest challenge of the project,” says John Wilday of project manager and employer’s agent EC Harris. Design-and-build contractor Laing O’Rourke met this by constructing the two storey, 1,317m2 block of weighing room, changing rooms and media centre and the adjacent parade ring all in the first 43-week phase and the two seven-storey grandstands totalling 13,936m2 in the second phase. But since the two grandstands made up the bigger portion, groundworks up to pile-caps were laid in the first phase and temporarily covered with tarmac for last year’s racing season. In addition, a 5,419m2 equestrian centre has just been completed by Eric Wright Construction.

Design and build challenge “The other big challenge was that the buildings were non-rectilinear and incorporated curving non-standard elements,” adds Wilday. To meet cost certainty, design and build contracts were awarded to Laing O’Rourke on the basis of final designs by Building Design Partnership as architect, structural and services engineer. But to safeguard the non-standard design, Building Design Partnership was novated as architect and structural engineer to the contractor.

One month into construction of the two £18m grandstands at Aintree, design-and-build contractor Laing O’Rourke was jolted by more than 1,000 complaints about the £185m stand it had just completed at Ascot. Spectators there found views of the racecourse obstructed by wheelchair ramps. This led to a £10m contract being awarded to McArdle Group to raise the terraces.

Straight after the Ascot fiasco, Laing O’Rourke was summoned to a top-level review of the Aintree project and its sightlines. But Aintree’s stands had already been designed to be narrower than Ascot’s, were located overlooking a sharp corner in the racecourse, and came with disabled access at the side rather than the front.

“Correct sightlines are fundamental to any stadium,” says John Wilday of Aintree’s project manager EC Harris. “Any problems had been removed during the design process. The only common factor with Ascot was the contractor.”