Ahead of the curve: Park Crescent rebuilt 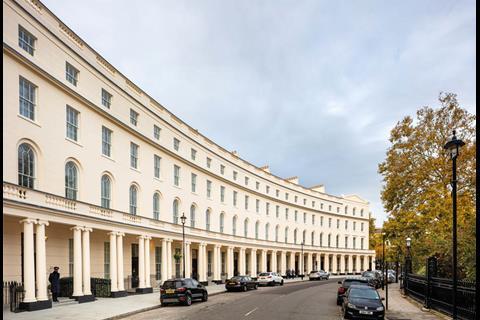 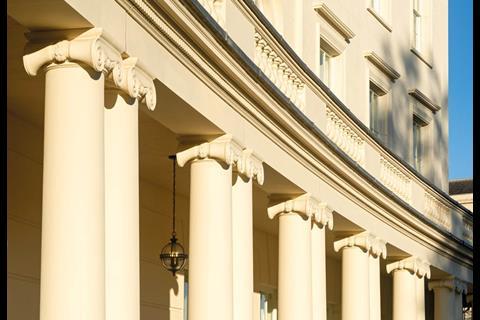 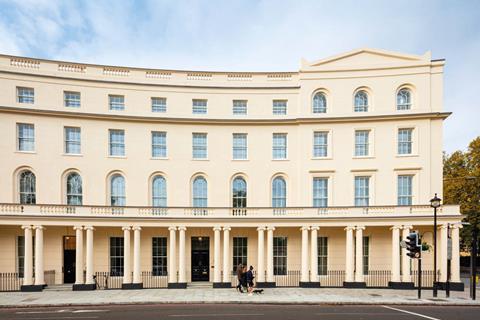 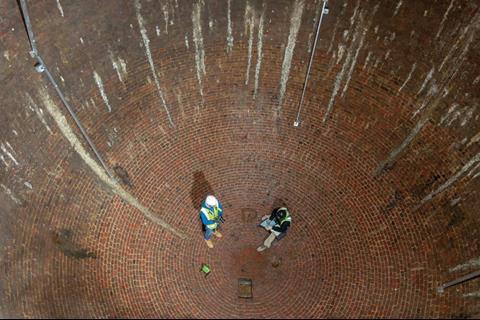 The icehouse – water for the ice came first from London’s canals, then later from Norwegian lakes 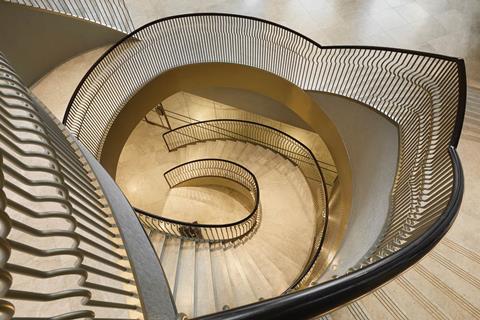 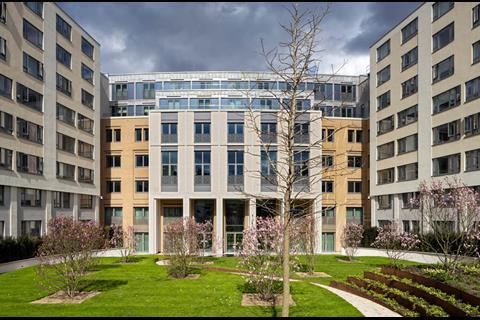 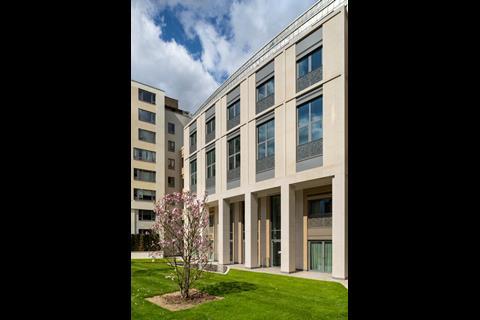 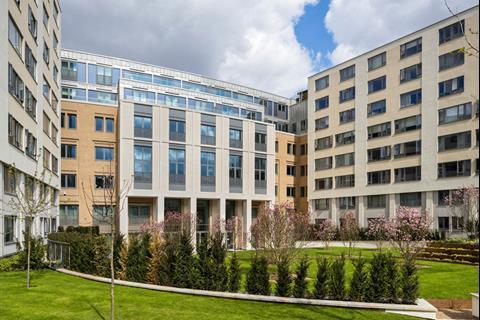 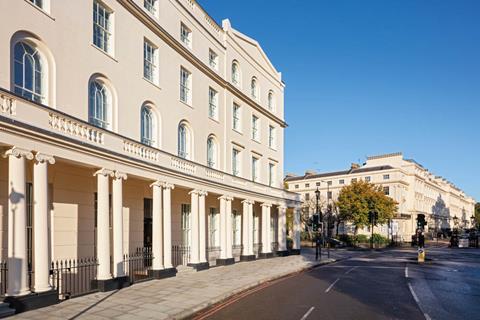 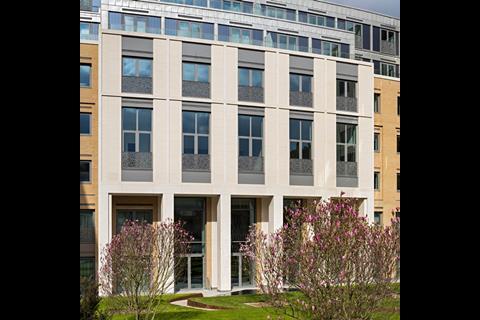 Plans to demolish a grade I-listed crescent designed by Buckingham Palace architect John Nash were never going to be uncontroversial. But PDP London has redressed a botched 1960s rebuild and restored many of the original architectural features

Trying to get any grade I-listed building demolished and rebuilt is a tall order. The challenge is even greater when dealing with an iconic crescent by one of Britain’s most renowned architects.

The distinctive curved and elegant colonnaded Park Crescent, south of London’s Regent’s Park, built during the early 1820s, was designed by John Nash, the leading Regency and Georgian architect of the time. Park Crescent was a key part of Nash’s masterplan for central London and was conceived as a full circus along with Oxford Circus and Piccadilly Circus. But this vision was curtailed due to financial constraints, and instead a park completed the crescent’s remaining semi-circle.

During the Second World War, Park Crescent sustained heavy bomb damage. Instead of redeveloping the site in the 1960s with a new structure, the original building was replaced by a replica frontage on a modern open-plan office development. Despite the damaged condition of the crescent, the building was listed in 1954 and retained its listed status after the 1960s rebuild due to its architectural significance.

When architect PDP London’s ambitious scheme involving Park Crescent West (one side of the crescent) was first proposed, the manner of the rebuilt 1960s facade which employed mainly concrete helped to convince both Westminster city council and Historic England to demolish and rebuild.

“The original proposal involved the retention of the 1960s facade,” says Ian Law, partner at PDP London. “But when it became clear that a lot of time and money was going to be spent keeping the 1960s facade facsimile and to refurbish it, there was a good argument for dismantling it and rebuilding it in a more scholarly and authentic way, thus guaranteeing its life for at least 60 years and beyond. We also argued that we would be building it back better by improving the detailing, using lime mortar, reinstating the chimney stacks, and improving its thermal performance.”

There were several iterations of the planning process before the proposal was finally granted in 2016 with numerous planning conditions attached. The Regent’s Crescent development, as it is called, involved not only the reconstruction of the facade to match Nash’s original but also a new contemporary building that sits behind, providing 67 luxury apartments and nine mews houses. Other amenities and basement parking are also included, and two 1960s apartment blocks had to be kept and remained occupied throughout the works. The development also included the facade retention of the grade I-listed 77, 79 and 81 Portland Place but the buildings behind were demolished and rebuilt.

By using lime mortar, which continually self-heals, bricks with expansion, and controlling the temperature during installation, we believe that only very tiny cracks that are inconsequential both structurally and visually will occur

Many safeguards, together with a bond, were secured to ensure that if the other building works did not happen, the facade would still be reinstated. Extensive historic research was carried out to ascertain the age and condition of the existing buildings. Planning conditions required that detailed photographs had to be taken of the 1960s stucco elevation and the demolished facade was kept and inspected to ensure there was no original Nash material.

Some of Nash’s plasterwork was found, though, in a subterranean pre-Victorian icehouse. Dating from about 1780, the brick icehouse was discovered when the land behind the building was excavated and found to be in remarkably good condition. When the original crescent was demolished and rebuilt in the 1960s, a lot of the building material had been dumped in this 13m-deep, 10m-diameter egg-shaped icehouse. The original material was removed, laid out and recorded, with some elements sent to the Museum of London. Thrillingly, public access to the icehouse via a new viewing corridor will be possible once a year or for special events.

Westminster council and Historic England were largely supportive of the proposed rebuilding of the facade when it was confirmed that there was no original material in the existing 1960s facade.

The facade reconstruction comprises, over five storeys, a self-supporting outer leaf of brick masonry with lime mortar and a 30mm-thick lime-rendered stucco finish. The thickness of the masonry facade wall varies between 327mm at the bottom levels and 215mm above the first-floor balcony. The new building, which sits behind the rebuilt facade, features a concrete frame with a lightweight steel framing system fitted between the leading edges of the slabs behind the masonry wall. Stainless steel wall ties are fixed to the steel frame and masonry to provide lateral restraint from wind loading, and the cavity is partially filled with insulation.

One of the most technically challenging aspects of the facade’s rebuild was to achieve a historically accurate elevation that employed modern performance requirements while subtly controlling its movement and cracking to very tight tolerances. Movement joints, being a modern concept, were not acceptable on a grade I-listed facade.

“A 120m-long facade without movement joints – we thought: wow!” says Maria Jose Camporro, technical director at structural engineer AKT II, which collaborated with PDP London. “Today, building regs recommend a movement joint approximately every 15m in a masonry brick wall to allow for expansion of the material. Movement joints mean that sub‑sections of the facade can expand or contract relatively freely without hitting into or pulling on anything, otherwise cracking would occur.”

Two factors can affect the expansion and movement of bricks, says Camporro. One is moisture expansion, which is when water vapour (in the air) gets into the brick and it swells. This is permanent and can be a problem if a wall has been built to precise measurements. The other is thermal expansion generated by heat, which is reversible. When the temperature is high, bricks expand, and will shrink again when it is cold. This all needs to be mitigated when designing a facade.

Camporro and her team undertook extensive research and finite element modelling to work out how they could resolve this. Pre-soaked, unused bricks aged between two and three years were specified. The advantage of employing this type of brick is that some of the expected moisture growth has already occurred.

However, the bricks sourced were only 60% moisture expanded, which meant that once assembled they would expand by a remaining 40%, which exceeded the initial design assumption of a 25% remaining expansion.

To mitigate this, the temperature at which the bricks were laid was artificially raised by creating a heated enclosure around the construction scaffolding (in the middle of winter), and controlling the temperature to 16ºC. This thermal expansion effectively mimicked the missing moisture expansion and allowed the facade design to perform as planned.

“In a nutshell, we found a way to keep the control of the brick expansion to something equating to 25%,” says Camporro.

The result is that, incredibly, there are no movement joints within the facade. At either end of the 120m-long central section, where the facade steps outwards, there is a movement fixing about 50mm wide. This allows for a predicted maximum movement of 25mm overall at both ends of the central facade section.

“By using lime mortar, which continually self-heals, bricks with expansion, and controlling the temperature during installation, we believe that only very tiny cracks that are inconsequential both structurally and visually will occur. It’s definitely the first time we have achieved a 120m-long brick structure with no movement joints in the UK,” says Camporro.

Despite these measures, Camporro still considered the building’s predicted expansion and contraction were greater than ideal. As a further solution, low-friction membranes or a damp-proof course were introduced at the facade’s base to reduce the differential movement between the bottom and top. Potential cracks at points of high stress were also minimised by the introduction of modern steel tensile reinforcement within the brickwork horizontal joints.

An added complication to the facade reconstruction is the fact that the crescent elevation is curved with a radius of curvature at approximately 110m. This aspect creates complexity due to its long elevation. According to Iain McLellan, associate at PDP London, the curve presented a challenge when setting out its radial grid as, typically, most buildings have an orthogonal grid line.

“We had to set out the radial grid very carefully using CAD,” says McLellan. “Where the lines intersect we did lots of checks to make sure they were in the right place, otherwise the curve could wander out towards Regent’s Park or not marry up across the road. We now know the curve only has an error of 5mm to 10mm in it.”

A final area of technical complexity relates to the proximity of the new development to three London Underground railway lines. The Bakerloo lies to the west, the Metropolitan to the north, and the Jubilee line runs directly beneath the site. There was obvious concern about ground-borne vibration and noise. To isolate the building’s reinforced concrete primary structure which sits behind the new facade, a system of acoustic bearings was installed between the basement and the residential storeys above.

There was an ambition throughout the project to produce a building that met modern performance criteria. Sustainability and a small carbon footprint were key considerations. The scheme achieves a 35% reduction beyond what is required by Part L, and features green walls and roof, along with 180m² of vertically mounted photovoltaic panels installed as an integrated cladding system. In addition, the reconstructed facade achieves a U-value of 0.15W/m²K.

As well as the new facade being thermally efficient, it also restores many of the original architectural features omitted in the 1960s rebuild. According to PDP London’s Ian Law, the reinstatement of key details also supported the case for demolition and rebuild.

“The 1960s facade lost quite a few front doors,” says Law. “That was part of our gambit with Historic England and Westminster council. They liked the fact that we were going to return these elements.”

The reconstructed Regent’s Crescent facade has now reinstated the 14 missing front doors clearly marking the divisions of the original townhouses, with decorative fanlights and the chimney stacks in their original position. The fact that the 21st‑century facade is better in every way than its 1960s incarnation is a testament to the design team and skilled craftspeople.