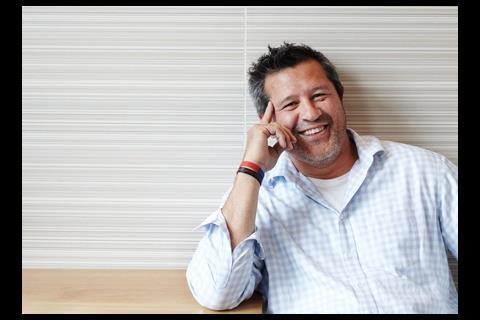 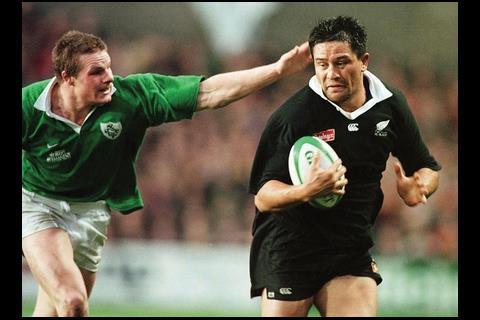 Any man who can calmly kick a 47m drop goal while playing for the All Blacks isn’t going to freak out when his construction businesses come under a bit of strain. Emily Wright talks to Zinzan Brooke, New Zealand’s legendary number eight

There are few people in the world who can describe what it feels like to be asked to try out for the All Blacks. Zinzan Brooke is one of them. The stuff boyhood dreams are made of became a reality when he was 21 years old – and in the middle of laying a roof. “I was doing a construction job,” he recalls in his clipped Kiwi accent. “I got called in because the All Blacks manager was on the phone. He asked me if I could come to trials that Saturday. Of course I said yes and it was a life changing moment, but when I got off the phone I went straight back up onto the roof. I wanted to finish my work. There was no reason not to – the flights weren’t booked until the next day.”

His reaction sounds bizarrely casual, perhaps because he didn’t think he had a hope in hell of actually being selected. But as any rugby fan out there will know, not only was he picked to make his international rugby debut in 1987, he became one of the most prolific players in recent history, receiving 58 caps during the decade he played for the All Blacks.

But his upbringing and early life couldn’t have been more different from this rise to celebrity as a sporting legend. Now 45, Brooke grew up in a small town south-west of Auckland in New Zealand, did a construction apprenticeship and trained as a plumber and gas fitter. For several years his rugby and construction careers interlaced, until he began playing at an international level. By the time Brooke’s rugby career came to an end he had relocated to the UK and, over the past eight years, he has returned to his construction roots and built up a small empire of building and property ventures.

Although he is still best known for his career in rugby, Brooke is now focused on making a name for himself in the construction industry too, and he is not prepared to let something like a recession stand in his way. Here, sitting in the B&B in Windsor he restored and designed himself, he talks about everything from what it felt like stepping out onto the pitch on his international debut to how his construction businesses are faring in the recession.

“I started playing when I was three,” says Brooke. “And I think I could have beaten you, even at that age,” he laughs (he’s right).

Brooke lived with his parents and five siblings on a farm. His four brothers were also all rugby players who went into construction – one is now Brooke’s business partner. The family never had much money, something Brooke says has been a driving force behind his ambition and love of rugby. “You should have seen where we grew up,” he smiles. “We were just a bunch of hillbillies. But it was a fantastic childhood. We had farm duties and chores to do before we were allowed to play rugby, like milking the cows and churning the butter. So the game was always something I had to work for and something I really looked forward to. Rugby was never forced on me.”

After playing amateur rugby at school and in provincial matches, his first real break came when he was 16 during a summer of sheep shearing. “It was in school holidays and I was having my lunch break reading the paper,” he says. “The Auckland under-17 rugby team was published and I saw my name on the list. I had no idea I was even being considered. Even when I ended up playing for the All Blacks, you didn’t know you were on the team – or not until 72 hours or so before the game when the team was announced on the radio and you just had to listen out for your name.”

Brooke spent several years balancing rugby with school and then his construction apprenticeship and building work. But by the time he hit his twenties, his performance in domestic games had caught the eye of the international team. “When I went to try out for the All Blacks I never thought I would make the team. But I was chosen and that feeling? Oh God. Amazing. Still today, when I think back to it, I can’t quite believe it happened.” And remembering that first game playing number eight against Argentina in the 1987 World Cup makes him shudder with excitement or nerves – or both.

“At the time, you think a game’s a game. But the level of intensity between a domestic and an international is completely different. I woke up at five on that morning and there wasn’t a split second between waking up and feeling the fear. It hit me instantly. The moment I opened my eyes I felt sick. And when I came out onto that pitch? I was so scared. I was 21, my first international game and the first time I had ever played outside flanker, which is such a specialised position.”

But none of that could compare to having to lead the haka – the traditional Maori tribal dance famously performed by the All Blacks immediately before all their matches. “I was absolutely crapping myself about that,” he laughs. “We all know how to do it, you learn it growing up. But leading it is totally different. Normally you just follow what the guy in front of you is doing, but I couldn’t. Everyone was watching me.”

Thankfully Brooke successfully led the haka, the All Blacks won and he scored a try. And he admits that for all the fear and nervous anticipation, playing for the team is everything it’s cracked up to be: “Playing at that level is the closest thing you’ll ever get to being a rock star. You’re out there on your own stage and you’re like, ‘oh yeah … come on!’” – he’s now barely sitting in his chair as he leans forward, fists clenched. A huge smile has lit up his whole face and you just know he is back there, on that pitch reliving those first All Black games.

In 1997 Brooke retired from international rugby union and moved to England to play for, and then coach, Harlequins. It was while he was coaching that he suffered a head trauma following a game in Spain in May 2007. There are reports of him falling out of a taxi “under mysterious circumstances”. Whatever happened that night, Brooke was told by doctors never to play again as a knock to his head could prove fatal. Although in fact he still plays amateur rugby union for Windsor, professionally he went back to his career in construction and now runs Valentines Homes, a housebuilding company that he set up eight years ago, and No 8, a construction recruitment firm, which has been running for just over two years. He has also recently launched a business venture identifying distressed sites and properties and then marrying up potential investors with developers.

Brooke says that, as for everyone else, the past two years have been tough. “I have had to shelve the housing business because there isn’t enough happening.” When it was up and running, Valentines Homes was a £12m-turnover business that provided a mixture of new-build and refurbished apartments in and around London. The group’s current portfolio stands at about 26 apartments ready to be let once the market picks up.

Brooke is not too worried about having to put this side of the business on hold, as he says No 8 – his recruitment firm for labourers, carpenters, bricklayers and quantity surveyors – is going well. Given the state of the market, this may sound surprising, but Brooke says he is convinced the group will be turning over about £4m by this time next year – it turns over £1.5m now. “If you just set up a recruitment agency without knowing anyone in the industry, then the timing would have been very difficult,” Brooke admits. “Luckily we know plenty of people and big firms like RG Carter, Byrne Brothers, Skanska and Balfour Beatty who trust us and want to work with us. And jobs like Crossrail and other major infrastructure schemes have got a lot of our contacts approaching us for staff.”

On this point, Brooke hopes that the new government will recognise how important public spending on infrastructure and other big public sector schemes will be for the industry. Maybe he should head on down to Westminster to have a little chat with Cameron and Clegg in person about that – the rugby player build and booming voice should make him hard to ignore …

Brooke’s latest venture involves him “finding guys with property and finding guys with money” and bringing them together. He doesn’t talk in too much detail about any of this – it is still in its early stages and he is playing his cards close to his chest. He simply says: “I try to cherry-pick my investors and match them up with the sorts of property and sites they would like. It’s going well and we’ve started putting matches together. I’m not worried about the future of the business. We have diversified enough to keep things ticking over. Plus, I do lots of interiors work and design and restoration and run a B&B, so there is plenty to do.”

In short, here is a man who made it to international rugby superstardom from a “hillbilly” existence on a farm outside Auckland, was selected to play for the All Blacks team when he was 21, played out of position on his international debut, was one of the most feared players in the world for the next decade, and now has five kids under the age of seven. It’s going to take more than a crash in the housing market to knock this number eight off his feet.

He was born Murray Zinzan Brooke in 1965, but later changed his name to Zinzan Valentine Brooke

He played 58 tests for New Zealand, and 42 non-international matches for the All Blacks

Brooke is considered one of the best number eights to have ever played for the All Blacks. During a 1995 Rugby World Cup match he kicked a 47m drop goal – the first of three

The best moments of his life: “First, winning the World Cup. Then winning the Ranfurly Shield [the most prestigious trophy in New Zealand's domestic rugby union competition]. Having my first baby …”

Brooke’s friend and business partner pipes up from the corner: “Um Zinny – trust me here, you had better mention your wedding day somewhere in this list.” “Oh God, yeah. My wedding. Put that before the baby but after the rugby. No, I’m joking. Wedding first, then the World Cup and then the baby.”