As bad as it gets: Building the UK embassy in Harare 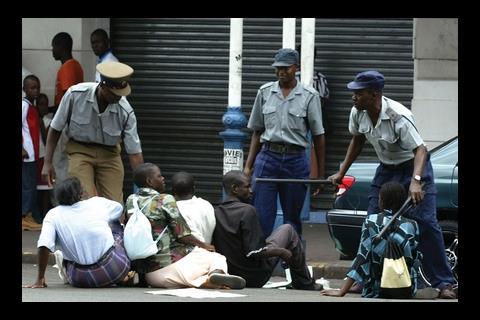 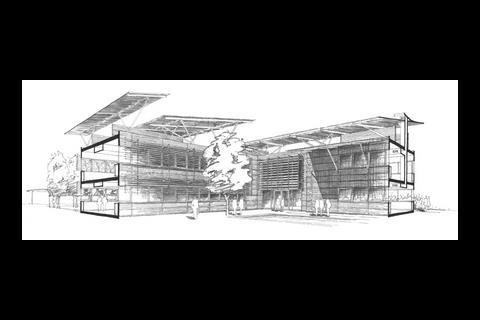 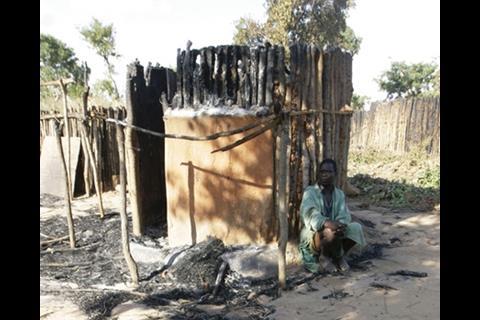 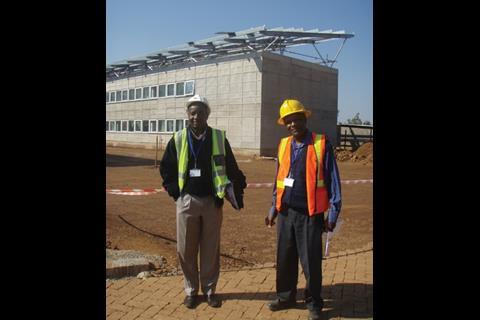 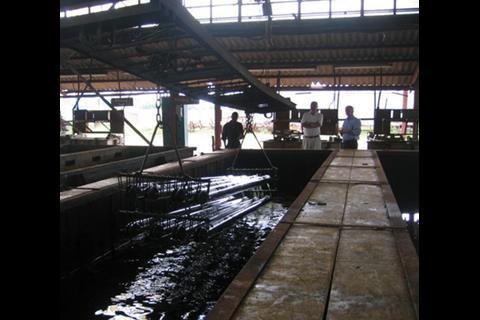 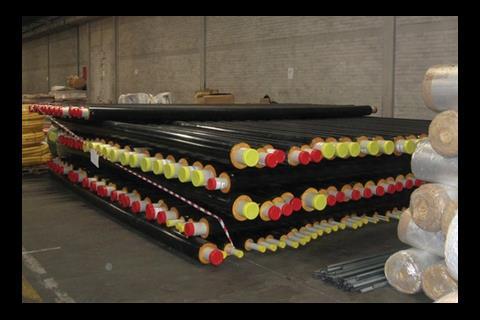 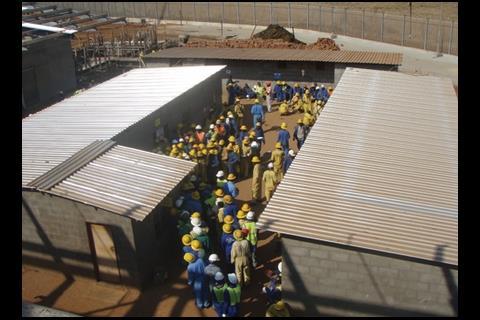 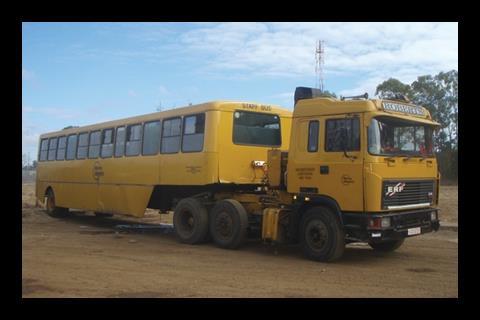 With violence, poverty, hyperinflation and disease halting work at every turn, how is it even possible to operate in Zimbabwe? Martin Spring asked those building a new UK embassy in its capital

Jonathan Manser, director of architect the Manser Practice, hands me the menu of the restaurant where he dined last week in Harare. A prawn curry is priced at 8,910 Tri. Except Tri is not the name of the local currency: it stands for trillions of Zimbabwean dollars. A note at the foot of the menu says, helpfully: “Please add nine zeros to your bill.”

“Counting the noughts is the biggest challenge of working in Zimbabwe,” says Manser. Stephen Haley, the commercial director of Mace, agrees: “The inflation is horrendous, and it’s got much worse since the recent election.” To illustrate his point, Haley holds up a $50bn dollar note. “A week ago, this was worth 50p,” he says. “Now it’s worth 15p.”

Manser is architect and Mace is the construction manager for a £21m project to build a UK embassy in Harare – a task that, considering the dire economic and political state of the country at the moment, could hardly be more challenging.

Luckily, when Mace was appointed to the project early in 2006, the team had the foresight to plan for Zimbabwe’s inflation, although nobody could have predicted the dizzy scale it would reach. The Foreign Office offered Mace a cost-plus contract that removed the financial risk.

In turn, Mace arranged to procure as little as possible of the materials it would need in the country itself. Instead about 90% of them were bought in advance outside Zimbabwe. Wherever possible, these were prefabricated into components abroad. Then, after shipping them to Durban in South Africa and trucking them a further 1,000km from there, the components and materials were stored in a secure warehouse in Harare. These precautions ensured that the team did not have to worry about not being able to afford resources.

What could not be protected from hyperinflation, however, were the local people working on the project. This is one of several problems site labourers face, along with Zimbabwe’s plummeting standard of living and intimidation by supporters of president Robert Mugabe.

The main contractor, Murray & Roberts of South Africa, pays standard labour rates laid down by Zimbabwe’s National Employment Council, but as Asif Merani, Mace’s site manager, says: “It amounts to just £5 or £10 a month per person and since this has to be paid in the local currency, it’s hardly worth anything after a few days.”

“Most labourers use the cash for their families – to pay the rent on their homes and school fees for their children,” he continues. “You can hardly buy food any longer, but if we don’t keep our staff healthy, they can’t work properly, so we provide breakfast and lunch for all workers. This is not common in Africa. We started by feeding all 200 people on site and that’s now grown to 500.”

Mace and Murray & Roberts also transport most labourer to the site and back home every day by bus. Merani says: “This is not normal either, but transport can cost people more than they get paid. At the moment we run five buses – one goes around the villages on a 30km trip.”

Merani reels off several additional perks the companies offer. Workers receive a monthly hamper containing maize meal, rice, oil and soap and coupons for diesel fuel, which keep their value despite inflation. They also get a £10 bonus if they work for a whole month without a break.

“If they finish the project with us towards the end of this year, then we’ll pay them an extra three months’ wages as a bonus,” says Merani. “This is about the only construction project left in Harare and when it ends most of the workers will be unemployed.”

This is an enormous incentive, but the possibility of not surviving long enough to collect it is a legitimate fear for many workers. Zimbabwe’s fragile political climate has meant violence in the streets of Harare and the surrounding villages has escalated.

Recalling the recent presidential run-off election in which Mugabe stood virtually unopposed, Merani says: “There was a lot of intimidation by supporters of Zanu PF, the ruling party, in rural areas. I don’t know if any of our site people were beaten up, but there were reports that one man’s house was burned down.

“Before the election, we had requests for people to go home during daylight, because they were scared of being attacked in the dark. Around the time of the election, which was on a Friday, we closed the site from Wednesday night to the following Tuesday.”

Beyond poverty and intimidation, however, by far the deadliest of all Zimbabwe’s problems is Aids. About 46% of Zimbabwe’s population is estimated to be infected with HIV and the impact of this on daily life is enormous. “We have a high turnover of labour and believe a lot of that is because of people dying of Aids,” says Merani. “You can see people on site with cold sores and sores on their arms. Murray & Roberts provides instruction on Aids awareness and safe sex, but the culture in Zimbabwe is not to talk about Aids – it’s a taboo subject.”

Two tales of a city

We have a high turnover of labour partly because of people dying of Aids. The culture is not to talk about it – it’s a
taboo subject

In sharp contrast to site labourers, life for many well-off professionals in Zimbabwe is a pleasant one. A telephone call from London to Harare during working hours finds Mike Clinton, director of local associate architect Clinton & Evans, on the golf course. “There’s no obvious strife in Harare, though hyperinflation is dramatic and there are large economic problems,” says Clinton, before driving his next golf ball across the green.

Back in London, Manser comments:

“Mike likes his golf. That is the enigma that is Harare – rampant inflation, no food in the shops, but five international-standard golf courses, all well-used, seven days a week!”

Manser has experienced both sides of this divide. “Last week I stayed in a fantastic hotel and had one of the best meals I’ve ever eaten, but outside I could see the government secret police everywhere. On my first visit, I was picked up by the police for showing too much interest in the president’s State House, and I was locked up for a few hours.”

Back at the construction site, five two-storey wings are being built to house the UK embassy, the consulate and the aid-giving Department for International Development. Here, working life is all about doing business in a Third World country, albeit one with special problems. One of these is the need to import materials through Durban. This is a long supply line to rely on at the best of times, but it makes everything much worse when things go wrong.

One such case involved the supply of “void formers”, intended to create a void below the ground-floor slab to accommodate the wet-weather heave in the soil below.

For this, cellular cardboard void formers were used instead of expanded polystyrene ones, and then these were not wrapped in plastic sheeting, as is normally recommended. “About a third of the slab was poured before anyone realised the void formers had collapsed,” says Manser. “There was an argument about this for about a month and half while the concrete hardened and once it had hardened we finally agreed that it had to be broken out.”

“The contractor had to break out about 120m3 of heavily reinforced concrete,” chips in Mace’s Haley, “and finding the concrete breakers was not easy.” That is when the importing delays kicked in. “We finally got the expanded polystyrene from Europe,” says Manser. “It went on a train for six weeks, and then disappeared for six weeks before we could find it again. I can think of examples of this happening in the UK, but in Zimbabwe, where people were under a lot of pressure, the impact on site morale was much greater and the ability to sort it out much less.”

According to Haley, quite apart from all the practical site problems, a continuing headache is poor communications between London and Harare. “Emails bounce back, the landline telephones are down for weeks at a time and you spend a lot of time on the mobile phone checking if information has got through,” he says. “In one case, a wall was built in the wrong location, as the drawing used had been superseded by a later one that had gone missing.”

Manser says: “Every time I go out to Harare, I take a cardboard box with six copies of all drawings I have issued since my last visit.”

These problems cannot fail to have an impact, and the result of all of them combined, Haley admits, is that the project is not likely to be completed before next March – 13 months late.

But not all is doom and gloom on the project. The site is impeccably managed and when it comes to quality of workmanship, Manser is delighted. He cites the insitu concrete walls with a corrugated fairface finish and the fabrication and galvanizing of the exposed steel sun shades, both undertaken in Harare by Murray & Roberts. “If you found that quality of workmanship on a site in Britain, you’d be thrilled,” he says.

For the UK government, which will own and occupy the building, all this spells a workable, durable, if rather late, building.

For the local workforce, which has done so much to create it, it has offered a short spell of security within a bleak economic landscape. Unfortunately for the workers, come next March, even that little security will disappear.