3
Aylesbury and after
Focus 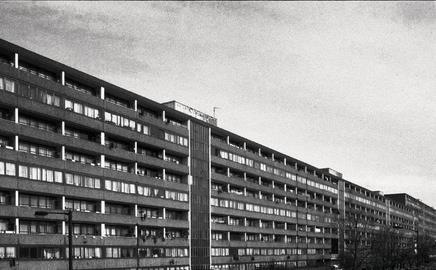 When Blair made his first speech as prime minister on south London’s Aylesbury estate, it was an illustration of the immense task Labour faced in regenerating Britain’s inner cities, and a symbol of its determination to tackle it. Overleaf, we look at what it did. But first, Mark Leftly returned to the site of that address to see what, if anything, has changed

Both in terms of the amount of money it has devoted to the problem and the sheer weight of policy initiatives, Labour’s efforts to improve rundown areas across the country have been staggering.

The results, however, have been mixed. Tom Bloxham’s column and the now-and-then photographs of Manchester and Birmingham overleaf demonstrate that many city centres have been transformed from exemplars of urban decay to places where people are proud to live. But despite the lofty schemes, the bold market manipulations and the billions spent, in many places there is a distinct contrast between the noise generated about urban renewal and the amount of improvement seen on the ground.

Perhaps more than anywhere, the Aylesbury estate in south London has come to symbolise this. It was on this archetypal sixties sink estate that, nine years and 350 days ago, Tony Blair chose to make his first speech outside of parliament as prime minister. There must not, he said, be any “no hope areas” in Britain. Since then however, the estate has come to epitomise the problems of stock transfer, the government’s lack of trust in local authorities, and disenchanted residents. It wasn’t until last year that work finally started on the first new homes since Labour came to power.

“After dark it’s like a war zone out there,” huffs Ken Goodman, the guv’nor of the Hour Glass, the estate’s pub. “An American bloke booked a room upstairs over the internet. When his taxi got here, there was a man being held by his feet over a balcony at the building opposite. He was a doctor and kept watching to see if he could help if the bloke was dropped … The other day a bloke ran in here with a gun,” he adds.

There have been a number of failures here – at least five masterplans have been drawn up over the past decade. Most infamously, 70% of residents voted against a stock transfer just over five years ago, which would have meant the estate being flattened, rebuilt and run by a housing association. Will Alsop, the masterplanner, told Building at the time that he was not allowed to consult the public about his ideas.

Richard Thomas, the councillor responsible for regeneration at Southwark council, blames Blair: “The stock transfer was opposed by the council officers. They were left in a difficult position by central government – if you want the money for housing you’re going to have to transfer. Blair’s mistake was antipathy towards local government and council housing. They preferred to trust housing associations and lost five years as a result.”

Thomas adds that if a housing association can be trusted to deliver ambitious plans, so should a democratically elected council.

The latest masterplan is being drawn up by Urban Initiatives and will include 2,400 new homes and a number of education facilities. It seems that the New Deal for Communities (NDC) team and the local authority have learned from their mistakes and have involved residents in their current ideas. For example, half the panel that selected Urban Initiatives are residents and two-thirds of the rehousing sub-group also live locally.

If the government is doing badly in the polls, the Aylesbury estate is used as a stick with which to beat Blair. This place has become a political football

Richard McDormott, deputy director of the Aylesbury NDC, says: “Residents are much better equipped, have a greater level of competences to get involved than they did in ’97. As a result they will get a better scheme.”

In a recent poll, 70% of residents approved of the plans. They involve developing the estate in four phases, to be built by 2012. The overall regeneration, including the establishment of new businesses, is expected to take 15 years.

Homes are now being built on sites just outside the estate. Work started late last year, allowing people to be decanted from the estate ahead of demolition. In total, 7,500 people will be moved out of 2,700 households. The estate will be flattened and rebuilt and people will have a choice either to stay in the new homes off the estate, in which they can remain council tenants, or become a housing association resident on the rebuilt estate.

Dave Mawudoku, the NDC’s communications manager, says there is less opposition to moving to a housing association than there was at the end of 2001. He says the key has been talking to the residents.

He also points out that only 500 people will be moved off the estate in the first tranche of housing, meaning that displacement should not be too great at any one time.

Blair’s speech here raised expectations, which must be a good thing, argues Mawudoku. But it had a problematic flipside: “If the government is doing badly in the polls, Aylesbury estate is used as a stick with which to beat him. This place has become a political football. Every policy initiative on crime and community cohesion and the spotlight is on the Aylesbury estate. It reinforces the notion of a rundown estate.”

The other thing that reinforces that notion, though, is just looking at the place – as Building takes its leave of the Hour Glass police are questioning some rubbish collectors over an incident they have observed. As Goodman, the pub landlord, puts it: “At the end of the day, Blair’s got his nice house. He doesn’t have to live in this shit.”