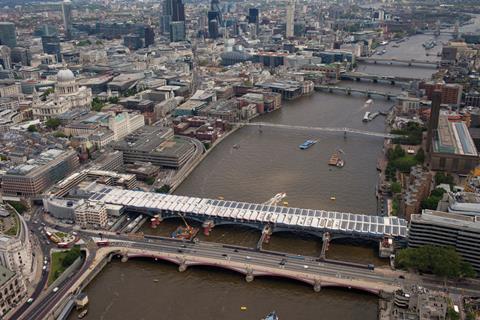 Over the past three years, Blackfriars station has been the subject of a massive £550m rebuilding scheme, a key component in Network Rail’s £5.5bn Thameslink upgrade programme. The most ambitious element of the project is the extension of its concourse over the full length of Blackfriars railway bridge, a proposal that has required widening and significant engineering modifications to the 1886 Victorian structure. It has also resulted in two key historical milestones: the new station entrance at the southern end of the bridge is the first on London’s South Bank in 120 years and the bridge itself is London’s first inhabited Thames crossing since the dismantling of old London Bridge in 1756.

The other key milestone is technical - Blackfriars is now home to the world’s largest solar-powered bridge. The roof of the new concourse structure will be clad in 4,400 solar panels covering an area of over 6,000m2. When installation is complete, the panels will generate 900,000kWh of electricity a year, about half the energy required to run the station. The power generated will also represent an annual saving of over 500 tonnes of carbon for the station.
According to Solar Century, designer and manufacturer of the bridge’s photovoltaic cells, Blackfriars bridge will then overtake the 2009 Kurilpa footbridge in Brisbane as the larger of just two solar-powered bridges in the world.

The bridge roof is clad in Sanyo HIT (heterojunction with intrinsic thin layer) photovoltaic modules, which comprise a thin monocrystalline silicon wafer surrounded by ultra-thin amorphous silicon layers. The cells are 100% emission free, incorporate no moving parts and produce no noise. They also deploy anti-reflection glass to ensure that as much incoming sunlight as possible reaches the crystalline silicon layer that generates the electricity. Each panel measures 1,610mm x 861mm x 35mm and weighs 16.5kg.

The concourse roof has been designed as a series of saw-tooth mono-pitches similar to the roof of the new domestic terminus at St Pancras International station. This serrated design evolved from early proposals which initially indicated a single pitch along the full length of the bridge. The solar panels are laid on the south-facing incline of the mono-pitches while valley openings below them admit northerly light into the interior.

Suzanna Lashford, commercial sales executive at Solar Century, explains that the concourse’s multiple roofs and slopes meant that an off-the-shelf roof framing system could not be used. “Working in conjunction with [station designer] Jacobs, we had to look at the overall roof carefully and develop a bespoke framing system of individual frames that enabled each panel to be laid within installation boundaries and with sufficient space for maintenance access and the electrical inverters.”

Inverters convert the energy harvested by the panels from direct current (DC) to alternating current (AC). At Blackfriars, there is not one central inverter for the entire roof but one for each panel. These, as well as the other electrical equipment that distributes power from the panels to the rest of the building, are stored in a central spine beam that runs the full length of the roof.

Take it to the bridge

The panels’ location on the roof of a bridge spanning a major river also made their delivery and installation a key logistical challenge. Another important consideration was that while the roof was still under construction it could only support the weight of a certain amount of panels. Various options were initially considered, including delivering the modules by barge and then craning them into place, a process that would have been reminiscent of the assembly of the London Eye capsules in 2000. Lashford also points out that this method had been successfully employed when Solar Century installed solar panels at the floating fire station a mile and a half upriver at Lambeth bridge.

Another option was to deliver the modules by train at night. In the end the modules were placed on the roof by two cranes erected at the southern and northern end of the bridges before being installed in their final positions manually. To date, around 50% of the panels have been laid and installation is expected to complete within the next few months. 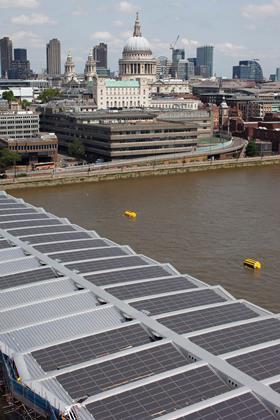 Lashford maintains that solar energy represents the best renewable energy solution for the particular site and constraints present at Blackfriars. “Network Rail considered other options, including water air pumps, which work in a similar way to ground-source heat pumps. But as stations typically have a low heat requirement but a high electricity demand, solar energy proved to be the most efficient use of the expansive roof space available. Also, the panels have been relatively easy to integrate into the roof structure and they address the flexibility and scale considerations that are often crucial when trying to use renewable energy sources in cramped urban areas.”

The fact that the UK now contains the world’s largest solar-powered bridge at such a prominent and strategic location is likely to raise the profile of solar energy within the country generally.

Lashford also predicts that the completion of Blackfriars will mark a general shift in the solar energy market away from ground-mounted installations and back onto roof-mounted ones. “Placing solar panels on roofs is generally a much more efficient use of space and can deliver an incredibly high energy return.

Blackfriars has a relatively small roof but we have been able to deliver 50% of the electricity required to run the entire station. If you look across Network Rail’s property portfolio at buildings with much bigger roofspaces, just think how much energy the same method could generate.”