Broadwater Farm Inclusive Campus: Down on the farm 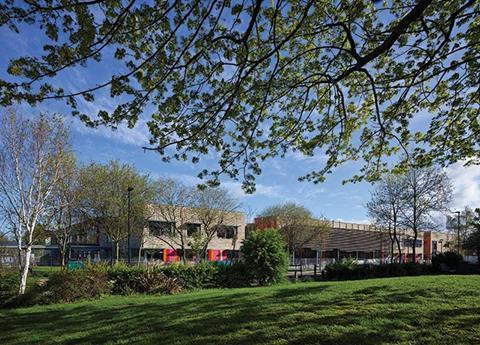 For many, north London’s notorious Broadwater Farm housing estate remains synonymous with the savage riots that took place there in 1985. This perception has not been helped by the close proximity of the estate to the Tottenham epicentre of the London riots of summer 2011. But as is often the case, perception is rather different from the truth.

In actual fact, Broadwater Farm today couldn’t be further from the caustic cauldron of urban menace it once was. Astonishingly, the £33m regeneration programme implemented in the early 1990s has helped foster a socially inclusive urban enclave which now enjoys one of Britain’s lowest crime rates and among the highest levels of perceived resident safety in London.

But there have been big physical as well as social changes across Broadwater Farm too and one of the most significant of these is the estate’s £14m new primary school. The Broadwater Farm Inclusive Learning Campus (ILC) has been designed by Gollifer Langston Architects and espouses a pedagogical programme almost as radical as the social transformations that have taken place in the surrounding estate.

The school accommodates 520 children aged three to 11, including 100 children with special needs. There was a time when the combination of SEN (special educational needs) and mainstream schools would have been unthinkable. But, although it is not without its detractors, there is a growing school of thought within our educational system that seeks more inclusivity across the various academic environments.

So as well as representing the culmination of a radical programme of inner-city urban renewal, Broadwater Farm ILC provides a rare and revealing architectural response to this emerging ideological methodology of a fully mixed and integrated educational system.

Architect and practice co-founder Mark Langston summaries the challenges set by the brief. “The starting point was always to break down the segregation between the different types of schools by creating a truly inclusive learning environment. 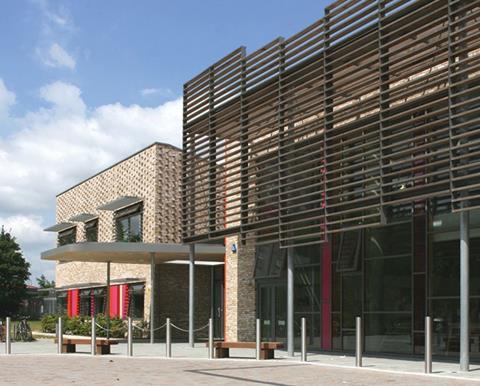 “But while there is all manner of separate design guidance for SEN and mainstream schools, there isn’t one for the kind of school we were trying to create. The challenge was how to develop the design without a prescriptive design model. So in the end we simply developed our own model through a process of iteration and by working in close conjunction with the heads of school and the local authority.”

The school replaces and combines three formerly separate primary schools that were previously located on the same site. Two of the schools were SEN and one was mainstream but each school had its own separate entrance and offered little in the way of physical or academic interaction.

The new school combines its three predecessors into one single building comprising three linked rectilinear wings loosely arranged to form a “U”. The central wing is orientated to face the road that runs adjacent to the school where its new single main entrance is located.

One of the first issues addressed in the design of the new school was contextual. The road on which the school sits is the main east-west trunk road that runs near the northern edge of the Broadwater Farm estate, facing the slab-like housing blocks of which the majority of the estate is comprised.

In the spirit of surplus spatial anonymity that afflicts many 1960s and 1970s council estates, this trunk road is an oddly indeterminate place, feeling more like a string of paved expanses than a thoroughfare. Responding to this ambiguity the former schools promptly turned their back on it, cowering far beyond the pavement edge behind a high hedge deliberately located to divide them from their surroundings.
“One of the key things we wanted to do was bring the school closer to the road and give it a civic presence,” says Langston. Accordingly, the new building’s entrance facade provides the adjacent road with a defined northern edge for the first time and offers a series of landscaped forecourts between the road and the school. 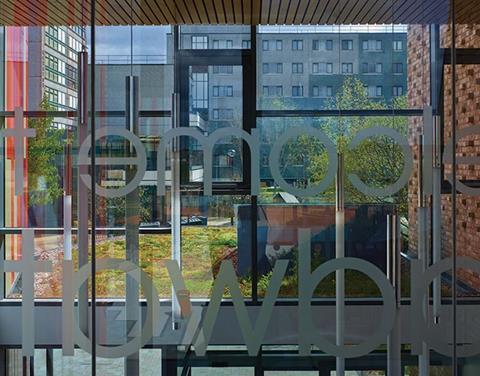 Its most striking feature is a double-height timber brise soleil that projects from the facade to form a full-height colonnade. This is clearly a key component of the new building’s “civic” aspirations and it provides a subtle counterfoil to the bulk of the building that cleverly suggests both grandeur and intimacy.

It is also part of a wider design strategy evident on all the school’s elevations to break down the bulk of the building, intentions rendered all the more ironic amid an estate whose hulking blocks and towers are the epitome of monolithic mass and monotony.

“We wanted to use scale and texture to soften the bulk of the school,” says Langston. “There’s normally lots of repetition in school design but it was important for us that the architecture was more an agglomeration of individual parts rather than the creation of a single, slab-like whole.”

Several design gestures are used to achieve this. Along its entrance facade the building reveals a continuous flat roofline to help it square up to the hulking monoliths on the other side of the street. But as the elevations move from the front towards the rear of the building, the roof disseminates into a more informal series of shallow pitches that adds movement to the building profile and doggedly chip away at its bulk. This is what Langston describes as a “layering process that filters and softens the mass of the building”.

Moreover it is a process that it introduced in the brise soleil, which provides the first suggestion of a tempered or punctured solid volume.

The brickwork too is recruited in an effort to mediate bulk. The school is wrapped in a pale, buff London stock type brick that subtly oscillates between shades of white and beige, etching a textured, chalky patina onto the facades. 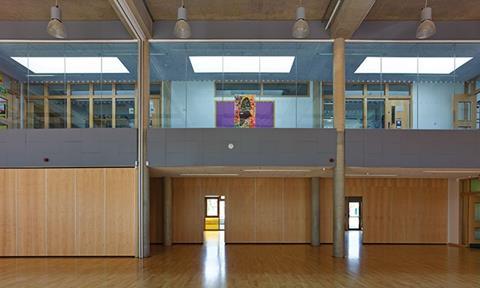 At certain points selected bricks also project forward from the face of the building. These form a three-dimensional pattern that adds depth to the elevations and, in bright sunlight, transforms the surface into a studded masonry tapestry of shifting shadows that is both tactile and playful.

The idea of play resonates most strongly in the use of colour on the exterior. Windows are occasionally splashed with stained glass, and recesses and reveals across the elevations are intermittently revealed as slices of bright pink or orange aluminium panelling. Also, selected window frames are exaggerated and extruded from the surface to surround the opening like a thick, brightly coloured band.

“We tried to look at it from a child’s perspective,” continues Langston. “We wanted to get away from the institutional design you often find in schools and introduce elements like colour and texture. This is what gets children’s attention and this is even more the case with those pupils for whom sensory stimulation is an important part of their teaching and communication.”

And this leads onto the core architectural and educational ambition of the school, to provide an environment for those children with special requirements that is fully integrated with the rest of the school. This is partially evident on the exterior. The ground floor is lined with classrooms that open directly onto subtly sheltered outside spaces, providing the sense of control and enclosure that is sometimes required for children with ASD (autism spectrum disorder) or PMLD (profound and multiple learning disabilities).

But it is internally where this principle of integration becomes most strongly evident.

The school’s layout is strikingly simple. The three wings are linked by a wide central corridor from which rooms open on either side like a spine, thus utilising the efficiencies of a double-loaded plan. The central wing contains communal spaces such as a partitioned sequence of dining, sports and assembly halls and the ICT and library suites. 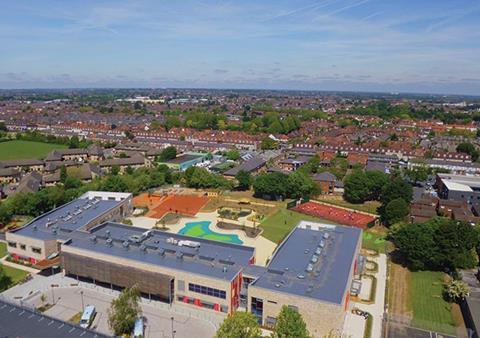 While the school faces mid and high-rise Broadwater Farm to the south, it takes its massing cue from the low-rise semi-suburban terraced housing

The wings on either side contain Key Stage 1 and 2 classrooms as well as the SEN classrooms. The latter are not clustered in one section of the building, but intermingled with mainstream classrooms. “It’s simply about getting the circulation right,” says Langston. “Once that happens there’s no theoretical need for segregation.”

Inevitably there are concessions to the SEN agenda. Most of the classrooms for ASD and PMLD children are located on the ground floor, thereby providing direct access to the outside spaces that are sometimes essential for their sense of safety and wellbeing.

SEN classes are also laid out slightly differently to mainstream classrooms. They incorporate large spaces where mobility equipment can be stored and they also provide space for fridges where food for those children who require a controlled or intravenous diet can be kept.

The school also contains a state-of-the-art hydrotherapy treatment pool which is linked to several SEN classrooms by a ceiling-mounted hoist rail capable of carrying children whose mobility is impaired.

But beyond these necessary additions, which Langston describes as some of the “key architectural challenges of the project”, internally the school looks and feels like a typical mainstream school. In fact, some of the other measures incorporated to help satisfy SEN requirements, such as large windows to promote a sense of openness, internal timber reveals to aluminium windows to foster a sense of intimacy and warmth and low-cill windows to facilitate observation, have helped inform and define the architecture of the entire school.

“Typically on a two-storey primary school everybody wants to be on the ground floor,” says Langston. “But with the very large windows on this scheme, you feel an even greater connection with the outside from higher up. Crucially, it also grounds you within the context and, unlike with the old schools, clearly establishes an outward-looking visual link with the surrounding estate.”

Broadwater Farm ILC was procured through the traditional contract route and Langston finds it difficult to envisage delivering a school with this level of prescription and customisation through some of the new
school procurement routes, such as the Priority Schools Building Programme, now being promoted by the government.

“It would have been almost impossible to deliver this school without a traditional contract. It’s not a solution out of a box; it’s a specific response to a particular sense of conditions. The procurement route was also helpful for the phasing: there was no money for temporary buildings so the new school had to be built in phases while the old was gradually demolished. And crucially, many of the details couldn’t be fixed at the start of the project and needed a long time to evolve and develop.”

There will always be some, perhaps many, who maintain that combined SEN and mainstream schools come at a cost to staff, pupils and parents and place unnecessary pressure on already limited funds and resources. But from an architectural point of view, Broadwater Farm ILC proves that there is no design impediment to creating fully inclusive schools of this nature. It also symbolises the ongoing renaissance of a
once troubled inner-city estate. 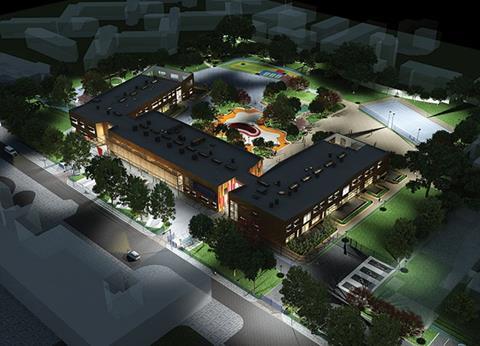