On a difficult site in central London, this staff offices project for the Imperial War Museums is a prime example of architectural quality and non-standard finishes delivered using modern methods of construction. The scheme, designed by Jestico + Whiles, was completed in half the time if using traditional methods, with 80% of it built in Reds10’s factory. This approach also enabled a 40% reduction in embodied carbon. 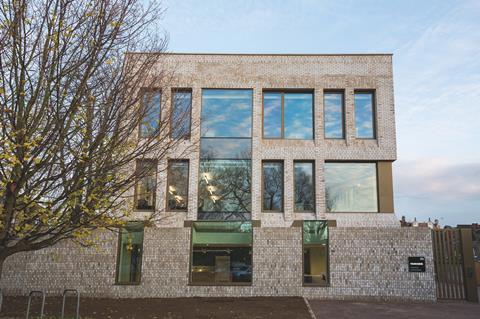 The Ten Degrees build-to-rent development, which reaches a height of 135m, provides 546 homes within a pair of 38- and 44-storey towers. The world’s tallest residential modular building, it was delivered in just over three years from initial concept to completion. The buildings incorporate more than 1,500 modules, manufactured and installed by Vision Modular Systems from its manufacturing facility in Bedford. The team averaged 50 module installations each week.

Offsite construction enabled HLM Architects’ design for this SEN school to be delivered 50% faster than if using traditional methods. As 70% of the work took place in the factory, there were 60% fewer trips to site, reducing programme length, waste and cost. Significantly shortening the overall programme increased scope for early engagement with the school in the design decision-making process.

An iconic building in the heart of Mayfair, Claridge’s has undergone a major five-storey underground extension, with Kane designing, prefabricating and installing the hotel’s £12m Energy Centre. Prefabricated elements including pumps, pipework, risers and steel frames were transported to site and lifted into position through a 3m x 3.4m opening. With prefabrication spanning seven months, Kane’s team offered a time-saving benefit for work on site and in the overall programme.

The single-storey Highfields Spencer Academy, designed by Lungfish, was built entirely offsite. After just 44 weeks on site, it was handed over early and under budget – despite the pandemic. Of its 45 modules, only three were bespoke – a repeatability that allowed for a more efficient design and better cost predictability. It also meant plans were submitted for planning approval within six weeks of the first project meeting.

Darwin Group was appointed in September 2020 by Cardiff and Vale University Health Board, which was in urgent need of a surge facility. Modern methods of construction were deemed the only viable solution. The provision of modular units provided an effective way for internal works to progress alongside external and cladding works, vastly reducing programme length and associated time-related preliminary costs.

The Broxbourne School in Hertfordshire is an example of how intelligent design, using offsite construction, can make what had previously been considered an unaffordable project affordable. The project originally went out to tender by several tier 1 contractors, which costed the scheme at around £32m. Mid Group was then brought in to use its optimised, component-led approach and a structural insulated panel system, which enabled it to provide a cost saving of £4m and a programme saving of five months.

Located near Coventry, the £130m UK Battery Industrialisation Centre embodies a pioneering concept in the race to develop battery technology for the transition to a greener future as part of the Faraday Battery Challenge. NG Bailey’s £18m installation for UKBIC was made up of a logistics area, process area, testing facility, two-storey office facility and numerous plant mezzanine levels. The installation was delivered using innovative techniques and included 140 prefabricated modules, completed in under seven months.

An impressive 82% of Vandyke Upper School was built using offsite manufacturing, with the £10.2m project delivered in budget and on time. The scheme also saw 99% of waste diverted and 15 tonnes of timber donated for reuse in the community. The use of modern methods saved 16 weeks on the programme, with the scheme delivered 34 weeks sooner than the client’s original expectation.