Construction salaries are growing faster than most sectors as employers struggle to fill skills gaps, but worries over job security mean people are wary of making a move. Building reports on the latest salary survey from Hays 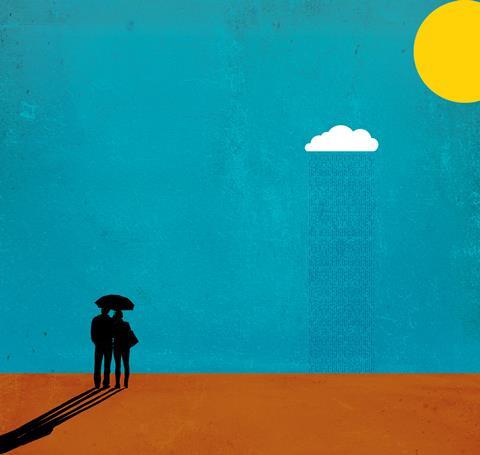 If the Brexit vote and the election of Donald Trump ensured that political and economic uncertainty was the new black in 2016, the events of this year have made it clear that ambiguity in the overall business environment is not going away. The political shock of the 2017 general election has been accompanied by corporate shocks from Carillion and Interserve, with clarity on terms of trade after Brexit all the while remaining elusive.

The latest annual contractor salary survey, undertaken for Building by recruitment firm Hays, seems to show that despite construction output holding steady so far, employees are increasingly responding to this hazy future by attempting to hunker down until the fog clears.

Hays’ survey of professionals employed in contracting organisations, conducted in early summer this year, found a big decline in the proportion who expected to move jobs in the next six months, to 34%, compared with 44% the previous year, as staff absorbed the more uncertain economic outlook.

This growing caution is despite continuing steady salary increases across all job types covered in the survey, as reported in the placements Hays has made over the year. The average salary growth of 3% that it found at contractors is exactly the same as last year. While not stellar, this is very healthy compared with the wider economy, and even within the construction and property sector as a whole. Hays reports just 1.8% salary growth across all industries in 2017, but 2.7% for construction and property professionals overall.

While demand and workloads remain for the moment healthy, the question for many employees is: do you have the nerve to make that job move you desire?

The industry has seen workloads continue to grow modestly in 2017, despite the post-Brexit uncertainty, and demand for staff is still strong. But there is no doubt we are no longer in the frothy recruitment market of a couple of years ago, when Hays’ survey reported average salary growth peaking at 7.4%, more than twice its current level. Andy Steele, chief executive of London and South-east contractor Osborne, which increased staff salaries by on average 3% this year, says: “It’s not as hot as it was – it’s fair to say it’s eased.”

At the same time, says Rick Lee, chief HR officer at contractor Willmott Dixon, the merry-go-round of senior staff at construction firms appears to have slowed. “Competition for staff has eased over the last year or two to some extent,” he says, “but there are still competitive areas, particularly London.”

Into this gently cooling market have come the crises at two of the UK’s biggest contractors, Carillion and Interserve, potentially making many of their experienced hands consider their options. Those who do decide to jump ship can help meet demand from other employers. Osborne’s Steele says: “The reality is that those firms become fishing grounds. We’ve seen a greater influx of CVs from those firms, which have been historically difficult to get people out from.”

For employees outside Carillion and Interserve – which this week announced a round of redundancies – those contractors’ woes will feed concerns about how stable a new employer might be. This is a key consideration, when moving jobs entails losing the safety blanket of accrued redundancy entitlement at their current employer.

As well as Hays’ survey finding a steep fall in those looking to swap jobs, it also found that – after the remuneration package – job security is now the most important factor when considering a new role, cited by 21%. Steele says: “Candidates are definitely worried about job security and wider confidence in the market. They’re asking about workload – this is a pretty hot topic. It’s their longer-term security, not just what their salary is going to be.”

Anthony Brown, sales and marketing director at interiors contractor BW, which has grown from 85 to 200 staff in the last three years on the back of a new growth strategy and a healthy fit-out market, says even in this buoyant part of the industry job applicants are voicing concern. “With the economy in post-referendum mode it feels like there’s more of a chance of a harder end to this current cycle than people had anticipated,” he says. “People are warier. They know the market won’t stay at this level for the next couple of years, so they want to make sure they’re making the right move.”

Duncan Bullimore, director of Hays’ construction arm, says this reticence to move is being felt even in the recruitment of the most senior staff. He says: “We have seen an increase in candidates accepting counter offers by their current employers rather than risk moving to a new company, supporting fears around job security, as companies invest in retaining highly skilled staff – albeit reluctantly.”

However, any reduction in the willingness of professionals to move will serve to exacerbate continuing skills shortages for those employers that are looking to recruit. Bullimore says: “Skills shortages remain an issue. People think employee fears around job security will lead to less candidate availability in the market – thus making it harder for employers to access the talent they need.”

Candidates are […] asking about workload – this is a pretty hot topic. It’s their longer-term security, not just what their salary is going to be

The paradox is that, while workers may be more cautious over moving at an uncertain economic time, there is still very strong demand for staff with the right skills. According to Hays’ survey, the roles with the biggest salary rises included site managers, senior site managers, estimators, contract managers and project managers – all of whom saw average salaries increase by 4%. Steele says that, in addition, bid managers (not covered by Hays’ survey) are in very high demand, with anyone at the “front end” of the construction process involved in winning work highly sought after. In contrast, health and safety professionals and more junior estimators, QSs and site staff saw lower rises.

BW’s Brown also highlights estimators, bid managers and contract managers as particularly difficult to get hold of, while Willmott Dixon’s Lee agrees that estimators, along with QSs, are the “hardest roles to recruit for”, with competition toughest in London and the South-east.

Steele says: “I’d say that 3-4% rises as an underlying figure might be about right, but that covers some significant spikes in some areas.

In normal trading to keep staff that’s the rise we’ve seen, but people are moving for more substantial pay rises. For bid managers, for example, we’ve seen 10% plus.”

The survey highlights the continuing impact of these skills shortages, with 22% of employers saying they do not have the right staff to achieve their current business objectives – barely any improvement on the 23% saying the same thing last year. More than two-thirds of employers said a shortage of suitable applicants is their biggest recruitment challenge, while 61% said skills shortages are impacting productivity and a third that they are holding back growth plans.

Seeking staff from outside the sector

Osborne’s Steele says: “It’s now got to be about how we bring people with relevant skills sets in from other sectors, like teaching, even where they don’t yet have the technical qualifications. This is an urgent need now.”

However, while contractors may understand that meeting these ongoing shortages will require making the industry more attractive to those working in other sectors, actually doing so is still a work in progress.

On issues of most importance to so-called millennials, such as work-life balance, the industry performs worse than others, with fewer than half of employees saying their work-life balance was good, compared with a UK average of 55%. But Hays’ Bullimore says the evidence from the survey is that this is changing, with 59% of employers saying they now offer flexitime working, up from 46% last year, and 54% letting employees work from home if they need to, up from 48%.

Bullimore says: “Employers in the industry are now more aware of the importance of offering flexible working options not only to help staff with their work-life balance, but also to help encourage more people into the industry, and help those who may be restarting their career after having a family. “Although the construction sector will remain different to many nine-to-five industries, employers are now helping by offering flexible working options.

For those already in the industry, however, whether or not to take the risk of that new job may be the biggest question.

In early summer 2017 Hays surveyed more than 933 employees and 421 employers from contractors and multidisciplinary firms.

Salary data has been compiled using information gathered during 2017 from Hays offices across the UK; it is based on job listings, job offers and candidate registrations