Costain vs Kier: The battle for May Gurney 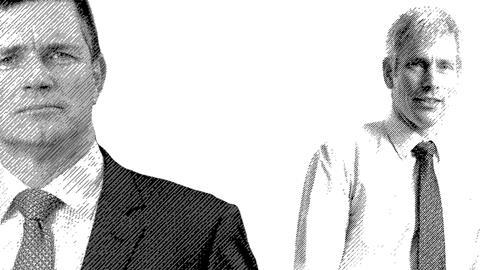 Who stands to win if Kier does decide to challenge Costain over its merger with May Gurney?

At around 1.30pm last Wednesday, Andrew Wyllie, chief executive of Costain, could well have been feeling an unpleasant sense of deja vu. That was the moment that rival contractor Kier chose to rain, spectacularly, on his parade by announcing its interest in buying May Gurney - just hours after Wyllie (pictured above left) had himself announced all-share merger with the support services firm.

It all had horrible overtones of Costain’s 2011 attempt to buy Mouchel, another support service giant with a slightly chequered recent history. Then Costain tabled four bids of increasing value after repeated knock-backs, only to see its prospective partner solicit a deal with rival Interserve.

Kier has yet to confirm if it plans to table a formal bid for May Gurney. However, with Wyllie at the helm of Costain for almost eight years and yet to pull off the kind of major acquisition that would let it enter the big league with Kier and Carillion, there will be huge pressure to ink the £178m deal. As one analyst, who declined to be named, said: “If Costain fails again this time round, there will be a lot of egg on Andrew Wyllie’s face.”

But what is it about support services firm May Gurney, with its focus on in bin collection and street lighting contracts, that makes it so attractive to Costain and Kier? And, if a bidding war ensues, which has the deeper pockets to fund the acquisition?

How it all started

The battle for £700m-turnover May Gurney - if it can be called that - began before the widely publicised profit warning it issued last September. This highlighted problems with a number of major contracts, saw the firm’s chief executive being replaced and precipitated a halving in the firm’s share price. Building understands that Kier had already approached the firm before this event to discuss a possible merger, but was rebuffed.

However, shortly after the profit warning, Costain chair David Allvey approached May Gurney chair Margaret Ford with the idea of a merger, with discussions beginning in earnest almost immediately. From November, Costain was given exclusive access to May Gurney’s books after signing confidentiality agreements. Building understands Kier then made further approaches but May Gurney did not enter into a dialogue. May Gurney has not commented on why it did not pursue any of Kier’s approaches, and since Kier’s announcement all parties have declined to comment further on the deal.

The result of Costain’s exclusive talks with May Gurney was last Wednesday’s shock announcement: a merger, fully agreed by both boards, designed to create a £1.6bn contracting and support services giant serving a huge range of public and regulated sector clients. The deal will, if it goes ahead, give Costain’s shareholders 53% of the combined company, and Costain management all the prime jobs: chair, chief executive and finance director.

Wyllie has been widely praised for his handling of Costain through the recession, with the firm showing higher revenues and profit in 2012 than in the year before the crash, 2007. However, he has failed to make a big, game-changing acquisition, and although it later became clear that not buying Mouchel was a lucky escape as the firm subsequently crashed into administration, that experience has not helped perceptions of his deal-making judgment. Nevertheless, Costain’s rationale for the May Gurney merger fits the story it has been telling investors for some time: that it wants to broaden its offering to potential customers from contracting to consultancy services and support services.

May Gurney gets two-thirds of its revenue from highways maintenance and utilities contracts, and significant smaller chunks from waste services and rail and waterways. At least two-thirds of Costain’s business is from what it calls “delivery of assets” - in other words, contracting - with the remainder split between consulting and support services. Wyllie’s plan is to expand these other two parts of the business to create a bigger and more diversified firm. Speaking after the merger proposal was announced, he said: “Whether in the public or private or regulated sector, we see a continuing trend where clients are all looking to consolidate their supply chains. They want skills around an asset from working up the [business] case, to delivery, to operation.”

Costain isn’t alone in treading this path - Carillion, Kier, and Interserve have already done so - and it’s May Gurney’s ability to offer a short-cut to creating a sizable support services business that makes it so desirable to both Costain and Kier. There is also an expectation - as yet unfulfilled - that the government’s programme of public sector cuts will lead to a surge in outsourcing deals as local authorities look to cut the cost of providing core services. Andy Brown, analyst at Panmure Gordon, says: “If the outsourcing bonanza comes through, the big companies want to be in a position to benefit.”

Added to this broad rationale, last year’s profit warning by May Gurney has left the firm’s share price trading around 20% below its former level, making any potential suitor attractive to the firm’s shareholders.

Costain’s problem, though, is that Kier is seen by analysts as having a more developed support services business, primarily in the waste, housing maintenance and general facilities management sectors. Where Costain’s customers tend to be blue chip clients - such as Magnox - needing significant engineering design and delivery skills from the firm, Kier already has a large number of local authority and social landlord customers for whom it provides less hi-tech services, more similar to those provided by May Gurney. Analysts, such as Stephen Rawlinson at Whitman Howard, have said this means the potential “synergies” - essentially cost savings - from merging with Kier would be greater, and the cultural fit would be better, reducing the risks associated with implementing the merger. He said: “Kier […] knows the local authority space far better than Costain, is familar with working on a large number of relatively small projects in maintenance and […] culturally is more attuned to the May Gurney style.

“The execution risk for Costain, given its construction background, is higher.”

Given Kier’s greater size - its turnover is in excess of £2bn - and the potential for greater savings from a merged business, analysts suggest Kier chief executive Paul Sheffield (pictured above) is likely to be able to afford more than Costain’s 253.2p per share bid, and could sweeten it with up to £50m in cash. William Shirley, analyst at Liberum Capital calculates a bid by Kier at 325p would offer it the same return on investment as the Costain bid, because of the greater savings Kier could make post-deal.

This could leave Wyllie in a difficult position. Building Value analyst Tony Williams says: “Costain needs a deal as Wylie has done pretty much all he can with it. But will they be suitor again? Only to fail again? For sure, Kier can blow them out of the water.” If Kier was to retain an interest after examining May Gurney’s books, it is likely to outbid Costain. Costain’s shareholders will be hoping the pressure on Wyllie to pull off this deal doesn’t result in a bidding war that could leave the winner more damaged than the loser.

Kier has up to four weeks in which to table a bid - essentially the period until Costain and May Gurney shareholders formally approve their proposed merger. Building understands May Gurney’s board formally gave Kier access to its books last Friday, which will give Kier the information it needs to decide whether or not to table a bid.

Sources suggest Kier will not consider a hostile bid, meaning it would still have to persuade May Gurney’s board to support any offer, in the knowledge that greater “synergies” might translate into more job losses if the deal goes through. However, May Gurney’s board will itself be under huge pressure to accept any bid that offers a higher price for the firm. Shareholders from all parties will be asked to ratify any deal with a simple majority vote.