Automation, 3D modelling and generative design processes are no longer a pipe dream – they are transforming how flagship developments are constructed. Jamie Harris looks at two pioneering projects using technology to create results that couldn’t have been achieved without BIM

There has never been a more exciting time to be designing buildings. The tools now available to architects, engineers and consultants not only improve the design process – allowing them to work more quickly, more efficiently and more flexibly – but can also open up new ways of thinking that can influence the design itself.

BIM is increasingly an everyday part of working life. A recent survey on BIM usage found it is becoming the norm, with take-up growing at the fastest rate in four years.

Meanwhile, early adopters are exploring which other emerging technologies might become everyday tools. Machine learning, automation and using artificial intelligence to make decisions are pushing the boundaries of what is possible and producing new solutions to problems.

Next year, the first habitable homes made by 3D printer will be completed in the Dutch city of Eindhoven, developed by construction firm Van Wijnen in a response to a shortage of bricklayers.

So, how will digital technologies change the way we build? Here, two examples of schemes from opposite sides of the globe illustrate how technology can fundamentally change our understanding of how to create the built environment. 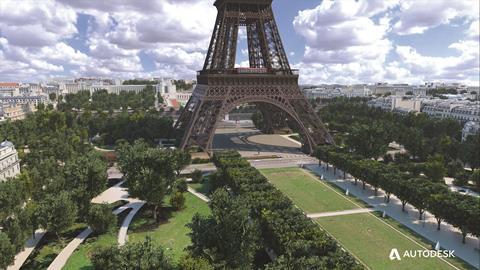 Rather than using BIM on a single building, this project is helping to shape the development of a much larger area in the French capital, taking into account urban planning, logistics and the possible future requirements for the area.

The City of Paris is embarking on a project to develop the land surrounding the Eiffel Tower. Work on the location, which also covers the Trocadero Gardens and the Champ de Mars park, is expected to be finalised in time for the 2024 Summer Olympics, which will be held in the city.

With four shortlisted teams, comprised of architects, civil engineers and landscape designers, the City of Paris authority teamed up with software company Autodesk to create an immersive 3D model of the area. The use of BIM is mandatory on this project.

Autodesk used Lidar scanning – a type of 3D surveying scan – to map out intricate details of the 2.4km2 site, including more than 1,000 buildings and 8,200 trees, generating 342Gb of point cloud data – 10.3 billion points. The imaging is precise to 5cm.

The process took thousands of hours in data capture alone. The result is a model that can be used by teams to help shape their proposals throughout the course of the bidding process and beyond.

Autodesk explains that the model will allow both the existing landscape and all the different proposed designs to be viewed from various sightlines, allowing for members of the team to collaborate and see changes to their designs in real time. The models are available to view in Autodesk InfraWorks and 3ds Max.

Nicolas Mangon, Autodesk’s vice-president for AEC strategy and marketing, says: “Embedding a digital 3D model and mandating the use of BIM in a competition of this level strengthens the creative process by allowing architects and engineers to quickly simulate different design hypotheses and visually verify their coherence.”

The visualisation of the project before it is built is also expected to lead to a more efficient project, delivered on time and with a smaller carbon footprint and less waste.

The designs within the model will be available to judges – who are expected to select the winner early next year – as well as to the general public. 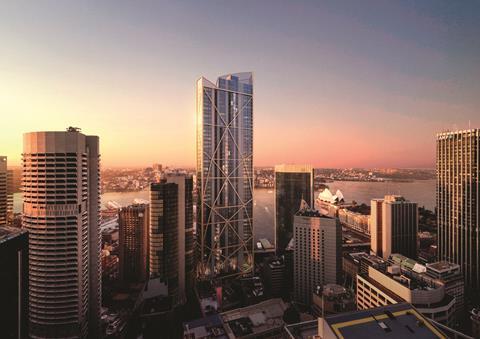 The project brief required the duo to work to a prescribed building envelope to maximise the available floor area – this was due to the irregular shape of the site’s boundary. Added to this, Fosters’ vision called for column-free interior space to maximise usable space. Most importantly, the architects wanted an exposed structural system that would provide the design identity for the building.

Due to the irregular shape of the building envelope, combined with the architect’s design, RBG developed a set of tools to explore options for an external bracing system and then generate a structure optimised for stability.

This use of parametric tools in automated processes is the foundation of what is called “generative design”, where computers actually develop the final design solutions, rather than merely representing the ideas of the human design team.

Fosters took inspiration from the models that were generated to make the exposed structural system a key feature of the design. The design went on to win the architectural design competition – construction began in autumn 2017 and is due to take four years.

Using Grasshopper software, the engineer carried out a topology optimisation study to understand how stress is distributed around the building’s irregular shape. Topology optimisation is an iterative structural analysis process, more commonly associated with the automotive and aerospace industries, which progressively adds material to highly stressed areas while removing material from areas of lower stress.

This analysis method, allowing a solution gradually to “evolve” over hundreds of versions, typically results in organic structural forms that resemble geometric patterns seen in nature, such as the symmetrical patterns seen on snowflakes and starfish, in a process known as biomimicry.

The method identified efficient external bracing geometries while showing opportunities to reduce the density of the structure towards the top of the building, to maximise views over Sydney Harbour.

However, the topology optimisation process typically requires a large amount of human interpretation to make sense of the output and translate it into a structure that can be built.

Therefore, RBG developed a second-stage structural analysis, using the results of the topology optimisation as a starting point and again mimicking natural processes by using “genetic algorithms” to optimise the structure further.

So while the topology optimisation created an ideal structure, the genetic algorithms tested that against defined criteria to find the version most perfectly adapted to the brief.

The structural geometry resulting from the second-stage analysis was benchmarked against a range of more conventional stability systems for tall buildings, including externally braced frames and core and outrigger systems.

Nick Cole, associate director at RBG, explains that the benchmarking exercise illustrated the difference in designs.

“The parametric design tools used on Lendlease Circular Quay Tower have helped develop solutions that would not have been possible using conventional design techniques.”