Cutting skyscraper costs by 50%: Shape of things to come 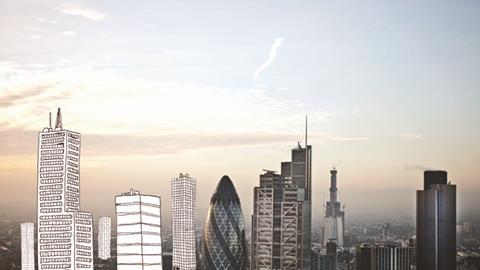 A crack team has been thinking up ways of cutting the costs of London skyscrapers by a whopping 50%. Emily Wright, who has been given an exclusive preview of the research, looks at how the proposals stack up

Over the past nine months, meetings have taken place that could determine the future development of the London skyline, herald a simplification of architects’ designs for high-rise office schemes and lead to a sea change in occupier demand. In response to a challenge set by industry heavyweight Sir Stuart Lipton, a crack team including Davis Langdon, WSP, Aedas and Hilson Moran has been on a quest since last May to show how the industry could cut the cost of the capital’s commercial skyscrapers by a colossal 50%. That’s at the same time as upping sustainability credentials, improving efficiency, comfort and usability, and ensuring the finished product has a lifespan of at least 60 years.

It all sounds pretty impressive - especially in such austere times when the need for highly priced, one-off iconic buildings is being called into question by many. Lipton’s initiative has already caught the attention of developers, including Hammerson, Derwent and Canary Wharf Group, and the research findings have been presented to city planner Peter Rees and chief construction adviser Paul Morrell - both of whom expressed support. The next step could be the development of a pilot scheme - something Lipton has suggested he, with support from Stanhope’s Peter Rogers, would back through his real estate development company, Chelsfield.

Still, cutting costs by half is one hell of a tall order and begs two big questions: exactly how will this money be saved and what will it mean for the people behind the development of London’s commercial skyscrapers? Vinod Thakrar, director of project management at Hammerson, has his concerns: “It’s a good initiative but there is a danger everything will end up just looking the same. While we would definitely be interested in developing quality commercial buildings for less - I think everybody would - I struggle to see how they will save that money.”

To try to answer this question, and to find out who is most likely to be affected by such a radical approach to commercial high-rise design, Building spoke to the four companies behind the research.

How will it be done?

Lipton’s challenge was to create a workable model for a 40-storey, sustainable, efficient commercial building in London with a 60-year life span for £125/ft2 shell and core compared to the average £250/ft2 it costs now. “I wanted to investigate why commercial buildings in the capital are so expensive,” he says.

“London is the most expensive city in the world to build tall buildings,” adds Steve Watts, director of Davis Langdon’s tall buildings division. And this isn’t just because of land costs - Davis Langdon’s research shows that shell and core construction in London is far more costly than anywhere else in the world, and by quite some way (see diagram, overleaf). But why?

Firstly, because London’s recent iconic buildings have tended to steer clear of rectangular shapes in favour of extravagant sculptures - think 122 Leadenhall, the Shard and the Pinnacle. These shapes result in irregular floor plates, adding to cost: “You can reduce your bottom line by around 15% with more regular floor plates,” says Watts.

Secondly, the UK’s fondness for bespoke facades doesn’t come cheap: “Taking the US as an example, you can see the difference when it comes to standardisation,” says Watts. “Designers are involved very early in the process to confirm the off-the-shelf products everyone wants. Here we tend to involve people early to come up with something bespoke. The price of a cube of concrete here and in New York is not that different.”

Lipton says the UK has to follow the US’ example to give end users what they want - which is, increasingly, a highly technological interior rather than a striking facade: “Standardised components are thought to be second rate in the UK,” says Lipton. “If it’s made in a factory it’s considered inferior. But you wouldn’t make a car with a hacksaw and a building is no different to any other industrial product.

“The great US skyscrapers, Sears, the Chrysler, are all very similar,” he says. “And our much-loved London squares are full of identical buildings but are no less iconic. But our big commercial buildings are incredibly complicated and are not designed efficiently.”

So the team has come up with a prototype design that is effectively a rectangle or square with no complexities, off-the-shelf components and cheaper facades. The group’s research so far using a Tall Buildings Parametric model of measurement has presented a number of optimum solutions that could be achieved in line with Lipton’s challenge. The results are close to the £125/ft2 with most coming in at between £136/ft2 and £154/ft2 with a 71%-73% efficiency.

Watts says: “A large, regular floorplate, together with a floor-to-floor height of 3.8m, produced a wall:floor ratio of 0.29 and an overall net:gross of 74%, both key efficiency metrics and a good result for a commercial building of this height.”

The ultimate building would have a square floorplate with a central concrete core and double deck lifting strategy, a four-pipe fan coil system with a centralised plant, a structural steel frame with perimeter columns at 6m centres and 15m spans to the core, all using standard sections, and equating to a total average weight of 65kg/m2.

Watts explains there would be double glazed curtain walling based on a chassis system that allows alternative orientation of panels and the ability to incorporate solid elements to satisfy user comfort and Building Regulation requirements.

The ultimate building plan isn’t necessarily set in stone and, for example, capital cost savings could be achieved by switching to precast concrete cladding panels and a short-span concrete structural frame. A move to decentralised air handling also enabled the basement to be rationalised and valuable net internal area to be increased.

Watts says: “There is absolutely no reason why architects can’t come up with something architecturally acceptable within these boundaries.” But do the designers agree?

It’s all about the design?

These sorts of changes are bound to affect architects more than most. Indeed, when Davis Langdon and the rest of the team took their proposals to city planner Peter Rees, he said architects would have to begin to re-evaluate the sorts of designs they present. While there are those like Ken Shuttleworth, founder of Make, who would welcome simpler, cheaper inside-out design with open arms, others are concerned that a move away from iconic design could be detrimental. Karen Cook, a director at PLP Architecture, says: “London’s skyline has benefited hugely from the spectacular design of its towers.

The global economical climate means architects must work very closely with clients to deliver good value for money. However, short-term cost savings shouldn’t be achieved at the expense of the quality of the completed building.

﻿There are architects who are happy to create buildings that are iconic, though not necessarily for their shape

“If London is to continue to attract business and nurture talent, we need to continue to build well planned, individual office buildings that deliver for the client and the corporate occupiers it seeks to attract.”

So what’s the answer? Judit Kimpian, head of sustainability at Aedas and one of the key players in Lipton’s research team, says that attractive, innovative towers do not necessarily mean a continuation of costly, one-off designs: “I think we’re talking about the reinvention of iconic here,” she says. “There are architects out there who are happy to create buildings that are iconic, though not necessarily for their shape - they can be iconic because of the level of functionality they deliver, how sustainable they are, how well planned and delivered to the end user.”

The end user is what preoccupies Dan Jestico, head of research and development at Hilson Moran. “The most important thing is to work out if this, our prototype building, is what the market wants,” he says. “We need to ask them ’would you be happy with a building like this which is rectangle or square but is more sustainable, effective, comfortable for end users and costs less to run?’”

There is plenty to suggest that, increasingly, statement buildings are not what people are looking for. It looks a bit showy in such tough times and, as was demonstrated at this year’s British Council for Offices conference in May, occupiers are becoming more interested in what’s in the inside of a building rather than the facade. They are likely to want to see money spent on the latest technological advances, usability and sustainability rather than a shiny facade costing £1,000/m2.

Another problem, says Kamran Moazami, WSP’s head of design engineering, property and development, is the agents who still have certain ideas about what they think occupiers want. “Agents dictate a lot about what they want - even if it’s not the more effective design. Our main job next is to go straight to the end users and talk to them so they know exactly what they are getting. They should listen to us and understand this and all the benefits. We need to educate the consumer.”

﻿Do you think iconic buildings are determined by shape? Vote in our online poll at www.building.co.uk