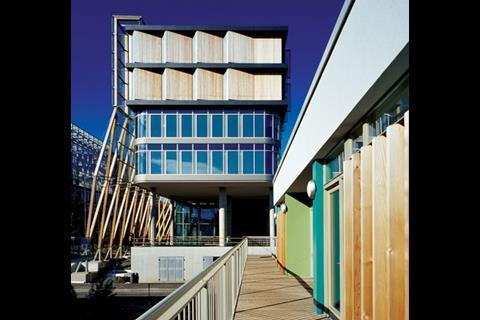 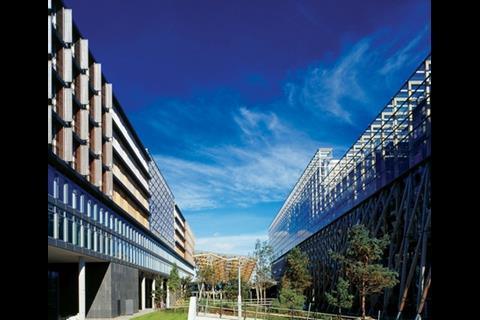 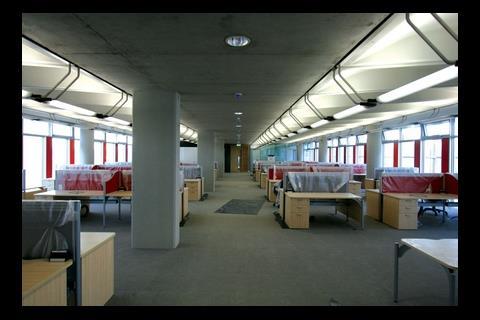 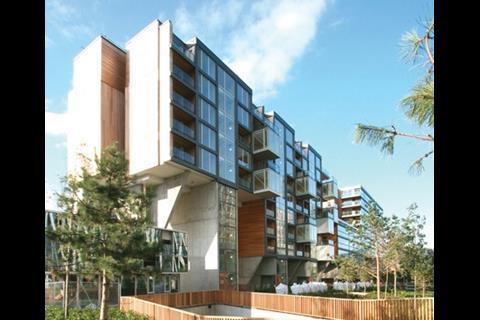 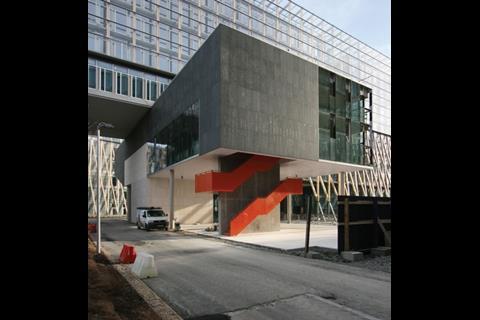 Bucholz McEvoy Architects’ Elm Park is a stunning £300m mixed-use, sustainable extension to Dublin, made all the more attractive by the charmless dross that surrounds it.

The scrappy outskirts of Dublin are the last place you would expect one of the most dynamic, high-density, low-energy developments in Europe. As you approach its southern boundary, the city disintegrates into a messy scatter of dismal concrete hotels, utilitarian hospital slabs and a dumpy neo-Norman church herding a flock of sheltered housing blocks. Then, just beyond this charmless sprawl, your eye is caught by a phalanx of six long narrow eight-storey finger blocks, all wearing beautifully tailored curtain walls, all neatly lined up in parallel and all capped by uncluttered flat roofs of the same height.

In stark contrast to its unprepossessing suburban setting, this is a mini-city in its scale, mix of uses, density and sophistication. Known as Elm Park, the £300m, 100,000m2 scheme brings together a four-star hotel and private day hospital, 28,500m2 of high-grade office space and 400 luxury apartments. Added to this are a conference centre and restaurant tucked beneath two of the office blocks, a swimming pool pavilion in one of the landscaped courtyards and, along the south side, 100 low-rise apartments of sheltered housing. And all this accommodation has been packed into the 6ha site at a plot ratio of 1.8:1, or six times the density of the adjoining suburbia.

“The rich mix of uses ensures 24-hour ebb and flow of life on the site,” says the architect, Merritt Bucholz. That may be so, but it is actually the inspired architectural design of his 25-strong practice, Bucholz McEvoy, that raises Elm Park to heady levels of excitement, vibrancy and sophistication. More than that, it introduces a new twist to sustainable passive environmental controls. Against estate agents’ advice, even the speculative office blocks are naturally ventilated rather than air-conditioned. It is claimed to be the largest mixed-use sustainable development in Ireland.

All these aspects come together to make Elm Park a more ambitious, adventurous and trailblazing scheme than any Urban Splash development in Great Britain. Yet it is a home-grown Dublin affair, with Bernard McNamara in the driving seat both as developer at Radora and as contractor through his family firm, Michael McNamara & Co, and with Merritt Bucholz providing the architectural vision. That said, this developer-architect-contractor combine has pulled in international expertise in design and specialist contracting. Bucholz himself is a graduate of Cornell and Princeton universities, the facade engineer and landscape architect, RFR and Neveux Rouyer Paysagistes, are French, the climate engineer, Transolar, is German, and a joint venture of Seele of Austria and Doppler of Germany won the facade contract.

A multiplicity of building types, amounting to 100,000m2 in area, has been packed on to the 6ha site

Behind Elm Park lies a grand heroic design concept that has much in common with those of Roehampton and Barbican Estates in London, although with low-energy sustainability as an added 21st-century ingredient. What it does not do is respond to the scrappy neighbouring buildings. Just the opposite: it spurns them in its scale, density, form, style and materials.

“Urbanism is about big-scale things – not these surrounding buildings,” says Bucholz. “Instead, we have made the place rise out of its environment.” The complex responds to two wider but interlinked aspects of its surroundings – the landscape of the whole area and the microclimate it creates.

Beyond the dismal neighbouring buildings lie three inspiring wide landscapes. Out to the east stretches the Irish Sea, which recedes at low tide to leave mudflats. To the west unfolds the manicured parkland of an 18-hole golfcourse. And further away to the south rise the bare Dublin mountains. As for the large site itself, it was an enclave of pasture land belonging to the Sisters of Charity, who still run the convent next door.

The rich mix of uses ensures 24-hour ebb and flow of life on the site. The generator of our proposal was the opportunity to retain this unique site as a green lung for the city

“The generator of our proposal was the opportunity to retain this unique site as a parkland setting, as a green lung for the city,” says Bucholz. Like the Roehampton and Barbican estates in London, a continuous garden has been pulled through the whole site at ground level, while the six narrow eight-storey buildings tip-toe over it. The garden is criss-crossed by walkways and bike paths, but it is not sullied by cars or even service vehicles, as these are all relegated to a lofty basement. The landscaped courtyards between the finger blocks are sheltered in places by wide clear-glazed canopies. The fingers run from north to south and frame views of the mountains, and their interiors take in sweeping vistas of the sea, golfcourse and mountains on all sides.

At the same time, the buildings respond to the surrounding environment in a more practical, energy-saving way that avoids air-conditioning – but in a manner tailored to the peculiar Irish seafront microclimate. “The wind is stronger than the sun in Ireland,” says Bucholz. “So we had to make the buildings work in the wind, and also in the sun on the few sunny windless days.”

The result is that all the finger blocks face east and west to catch the wind, rather than the more conventional north–south aspect to catch the sun. To heat, cool and ventilate them naturally, the three office blocks have sophisticated breathing skins. But their east and west facades are quite different to make best use of the combination of wind and sun (see box, below).

The passive low-energy make-up of the commercial buildings may ruffle feathers among estate agents, but at Elm Park it has brought an even more profitable commercial benefit. “We were able to pack much more on to the site than the other two architectural practices that submitted designs to the developer,” says Bucholz. “But the Dublin city planners were quite comfortable with the density of our scheme because the natural ventilation left the roofs clear of bulky plant.” The planners also liked the rich mix of uses and even suggested that the conference centre and restaurant should be added to give it even greater diversity.

The mix carries through to the architectural style, which covers six distinct building types from hotel and offices to sheltered housing, restaurant and pool pavilion. Most of the blocks are further broken down into multifarious facades, some flat, some zig-zag and some with projecting brises-soleil.

While all this is enough to leave the visitor goggle-eyed, it does not come across as a gratuitous architectural zoo. It is more of a latter-day, green-hued functionalism, where the facades and materials can be seen to be determined by the orientation and passive environmental controls of the internal spaces. The dominant external materials are clear glazing, natural timber, fairfaced concrete, with slate-grey aluminium edges to the apartments and bright splashes of scarlet staircases below the restaurant and conference centre. It’s also a high-spec, high-tech style, with immaculate detailing and top-of-the-range off-site manufactured components, even including the prominent laminated-timber columns to the offices and swimming pavilion.

With such a multiplicity of features like this, Elm Park clocks in as one of the most exciting, vibrant, sustainable and forward-looking minicity developments in Europe.