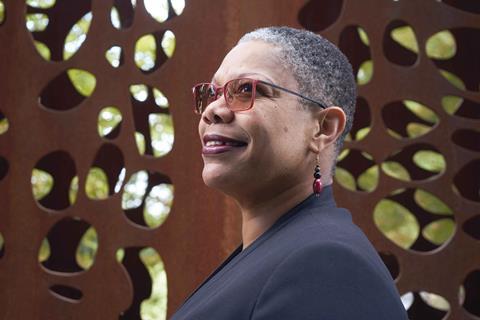 Mary Pierre-Harvey is in the driveway of her home, about to leave for the day. As she snaps her seatbelt on, the phone rings and one look at the caller ID tells her it’s the call she’s been waiting for. The person on the other end, a representative of Oxford Brookes University – voted the country’s best research university under 50 years old, three years running – tells her the good news, the result she wanted but thought might not be attainable.

Pierre-Harvey hears that she has landed the head of estates job. Her response? Shock and a hurried request for the offer to be repeated. “I thought they might have had the wrong number,” she says with a laugh. “Although I knew I had the skills and the experience to do the job, I knew the HE [higher education] sector usually hires from within, I didn’t think I had much hope.” She had also never seen any other black female directors of estates at UK universities.

“I just can’t describe that moment,” she says, a broad grin across her face as she recollects the instant she realised the offer was the real deal. She had just become the first black female director of estates at a large UK university.

Talking to Pierre-Harvey five months on from taking up that role, her energy and strong opinions about the work she is doing and the sector she is in show that she is already making the most of her role. She laughs easily, speaks openly and is not afraid to have her own approach to the task at hand. And that task is no mean feat. She lists her goals as managing the university’s £220m, 10-year capital programme and digitising the estates programme. She aims to improve regulatory compliance and construction quality and, perhaps the most surprising item on the list, train up her replacement. And she has a detailed plan of how to do it all.

The £220m pipeline of capital works currently planned for Oxford Brookes includes a number of projects already under development. While this may seem a smaller pipeline compared with universities – such as UCL, which is halfway through its £1.25bn decade-long Transforming UCL programme, or Manchester university, which is at the tail end of a 10-year programme – Oxford Brookes also has several exciting projects on the table. A £25m technology centre is already on site (see overleaf), with Graham signed on to a pre-construction services agreement. Further down the line there will be a £75m “intensification” of the existing Clive Booth student village, which will add 1,077 bedrooms to the site. Pierre-Harvey says this project, which was refused planning permission at a meeting in June, despite being recommended for approval, is still a key part of the estates programme and plans are currently being worked on, with the university considering its options. The university is also opening an 887-bed student residence with operator Unite for this academic year.

But Pierre-Harvey says these programmes, while quite enough to be getting on with, are just part of her plans. There are several feasibility studies for new facilities under way, refurbishment works planned for halls of residence and the restoration of the grade II-listed Headington Hill Hall.

For those looking to get some of this work, Oxford Brookes currently has both contractor and professional services frameworks, though the contractor framework comes to an end next year. Pierre-Harvey says that given the volume of public sector frameworks open, the university is now deciding whether to re-procure its own or use an existing one. Contractors on the framework’s major lot include Bouygues, Graham Construction, Stepnell and McLaughlin and Harvey. Turner & Townsend and Currie & Brown are among the firms carrying out cost consultancy and project management services for the university.

Pierre-Harvey says the scope of the estate remit at Oxford Brookes is wide-ranging. It’s a large, three-campus university, though this will not be the case for long. “Our third campus is Wheatley, which we are moving out of. We are selling that,” she says. The university is currently in the appeals process, with the secretary of state considering overturning a decision by Oxford council to refuse permission for a 500-home development on the 400-acre Wheatley site. “We had an officers’ recommendation to support the application, the members refused it.”

Pierre-Harvey seems confident the appeal will find in the university’s favour, saying there have already been a number of private sector companies expressing interest in buying the site to develop once planning comes through. She says the scheme, which was refused over concerns about potential harm to the green belt, would help tackle the drastic need for housing in the area. Pierre-Harvey says this planned decant and land sale are among the biggest challenges on her plate but she’s far from fazed by them. “It is really exciting; it is something different.”

Why shouldn’t the person to replace me come from within our Oxford Brookes community? that would be a real legacy

Pierre-Harvey’s plans also include writing her own life story up as a book – provisionally titled The Miracle Rose – and there is certainly plenty of material to go into it, both professionally and personally.

Pierre-Harvey, who was raised by her single mother in Trinidad, is a mother of five herself. Refreshingly, she does not shy away from discussing what her role as a mother has done for her career. “There are a lot of transferable skills from motherhood. I have had to be highly organised and know how to compromise. It’s taught me a lot about being a manager,” she says with a laugh.

She has no limit on her interests outside the office. She is a technical official for British Athletics, adjudicating throw events. She is also a keen cook, saying: “I love West Indian cooking. I’ve always wanted to cater for niche parties.” Which is something she has actually done, having catered for a 500-people event for the Diocese of Westminster.

Pierre-Harvey has also spent a lot of time volunteering with both young people and the elderly. She has helped a youth mental health team interview psychiatrists, organised events with the elderly community from her church to help stave off dementia and still manages to fit in six-and-a-half hours of sleep a night.

Tackling big tasks is nothing new for Pierre-Harvey, a trained surveyor with architectural qualifications, whose previous roles include a stint as the head of estates at Heritage England. While there, she was in charge of the restoration of Dover Castle, and also of Westminster Abbey’s Chapter House, which saw busts of her and the rest of the project team permanently installed at the abbey, as replacements for irreparably damaged gargoyles. At Heritage England, she was also responsible for maintaining the white cliffs of Dover – managing a team of abseilers whose job was to minimise the risk of loose chalk falling onto properties below, while taking care not to disturb nesting peregrine falcons. She has also been the director of estates at Harrow School and the assistant director of strategic estates at the Palace of Westminster. “Different doesn’t scare me,” Pierre-Harvey says. “Different tasks, different jobs, they are exciting.”

This attitude extends into the areas of her current role that many outsiders looking in may deem less interesting. Pierre-Harvey speaks with as much passion about her work on improving statutory compliance and construction quality as she does about “delivering the shiny new buildings that you get to celebrate with a party and champagne”.

It’s a challenging time for building safety, with the fallout from the Grenfell fire and the Hackitt review having a wide-ranging impact that is being felt throughout the sector.  She feels that “lessons learnt” are not always applied as quickly as they should be in the sector and says she is determined changes “will happen here”.

Getting things right in the construction process the first time around is key to improving both quality and compliance, according to Pierre-Harvey. “The problem is that quality isn’t necessarily a tangible thing when it comes to procurement – so I think that part of that process needs to be incumbent on the contractor to provide a quality plan they can be judged against.”

And from the client-side Pierre-Harvey is taking steps to make sure this is the case. “Clerk of works. Our big question is: where did they go? So, we are recruiting one as the client to make sure we get the quality we are after.” Pierre-Harvey, who recently undertook a construction quality management course with the Chartered Institute of Building, says the phase of construction that is too often rushed is the commissioning phase. “I believe in turn-key projects, which means that the staff moving in know where the light switches are, all the blinds work and there are no leaks.”

Modern methods of construction are also high on Pierre-Harvey’s to-do list, with BIM and offsite both on the agenda as part of the push to digitise the estates programme. “We are not as far along the BIM route as we would like to be, but it is certainly on the agenda and level 2 is very much in sight.” Pierre-Harvey is also big on maximising the expertise from a wider pool of people within the university. For example, Dr Rajat Gupta, an academic in Oxford Brookes’ architecture school, is a world-leading voice on sustainable buildings, something Pierre-Harvey says the estates team must leverage. There is also a product testing programme in the architecture school, which works with companies such as Balfour Beatty, another part of the university’s offering that Pierre-Harvey is keen to utilise.

She says she is determined to see more cross-departmental working throughout the 10-year programme. 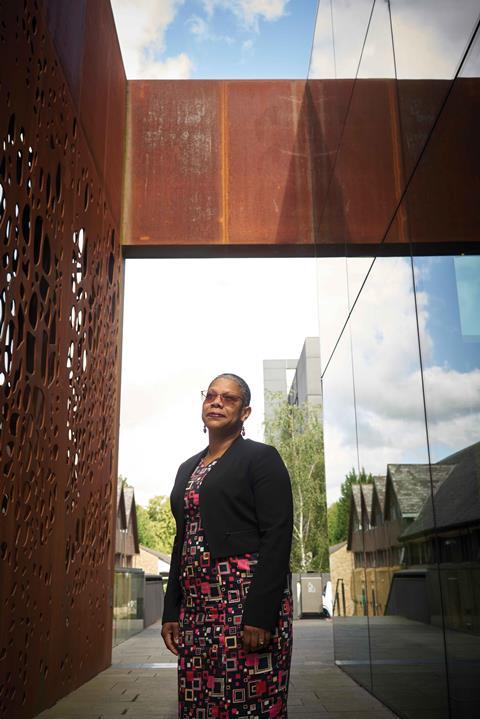 The last item on Pierre-Harvey’s to-do list is training up her replacement. “People thought it was a joke when I said it, but why should it be?

I am not going to be here forever and why shouldn’t the person to replace me come from within our Oxford Brookes community? That would be a real legacy.” For her, training, personal development and management is key. Pierre-Harvey says that she is currently reviewing the structure and development of her 550-strong team to make sure that it is fit for purpose.

“I figure if people are going to spend most of their day at work, they need to feel fulfilled and challenged, they need room for growth, and I want to be the one to facilitate that.”

This attitude reflects the amount of hard work Pierre-Harvey puts into her wide-ranging and diverse role. Commuting from London to Oxford every day means she gets up at 3.45am. She wants to use this determination and energy to push to modernise the way both the university’s estates programme and the estates team are run – and this work ethic has been obvious since very early in her career. Back in 1990, Building dubbed Pierre-Harvey, then a recent graduate, a “superwoman” construction professional – and everything she’s done since shows a determination to prove it.