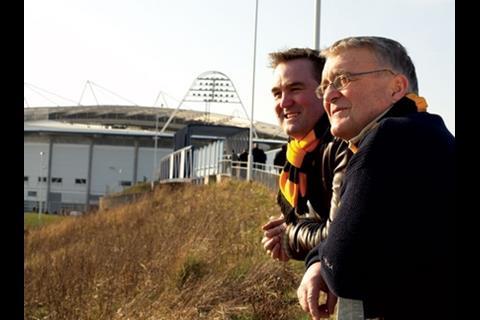 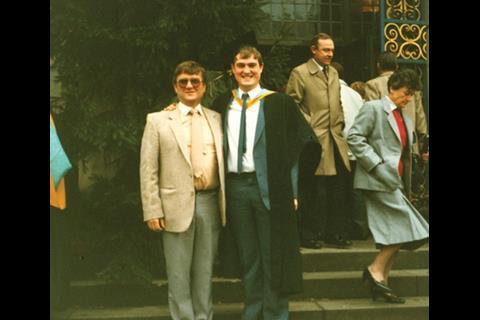 Colin ‘Dano’ Daniel was a fearsome site manager who used to have ‘a lot of outbursts’. But that was before he worked for his new boss – his son Julian, head of Bovis’ south division.Now they live, eat and breathe construction together, pausing only to watch their beloved Hull City. Stuart Macdonald went to meet them.

Colin and Julian Daniel are father and son and work for Bovis Lend Lease in London. They are from Hull and life-long fans of Hull City FC. Colin, 67, is a site manager and has worked in construction for 52 years, first for Wimpey and then Tarmac after it bought Wimpey Construction in 1996. Julian, 45, is head of Bovis’ UK South division and is Colin’s ultimate boss. He has 26 years’ experience in construction and, like Colin, used to work for Wimpey Construction, before joining Bovis in 1998. Julian’s brothers Nick and James also work for Bovis as a project manager and in IT respectively.

Colin: My original buzz when I was a boy was to be a farmer. I used to carry 16-stone bags of corn up to the granary when I was 14 to earn some extra money. When I left school at 15, some guy offered me a job as an apprentice joiner in a small workshop. I really enjoyed it and am still enjoying it today.

I joined Wimpey in 1963 and the guy who trained me was an absolute brute of a man. You never got any thanks off him. He just savaged you, day after day. I suppose I just had this training, and carried it on. We’ve got a lot of madness in the family – that’s what my dad used to say anyway. You had to rule with a rod of iron in those days if you wanted to get anything done.

Julian was a bit timid when he was a kid. He was still playing with Dinkie toys when he was 16. Some were construction Dinkies but not many. He was a bit quiet, as was I when I was young, but he was OK. He first came to site to start working when he was 16 and he fitted in really well. I treated him the same as everyone else, but probably more so. His brother Nick, who’s a bricklayer, got the same as well when he joined three years before him.

For 19 years I was in charge of building council housing on the Bransholme Estate in Hull. We used to build them fast. My highest rate of handovers was 25 units a week, and that was high-rise as well. I used to run from one end of the site to the other, to check foundations at one end and do handovers at the other. You had to keep the thing rolling.

Once that was finished, Wimpey flew me out to Dubai with only five days’ notice. They conned me in a way. When we got out to Dubai we got straight into a jeep and started driving along this road and kept going and going, and I’m thinking, bloody hell, where are we going? Then it starts getting dark and we ended up in the middle of the desert in this camp and I woke up the next morning shell-shocked. The job was an oil and gas refinery in Abu Dhabi. I’d never done anything like that before, but I have a habit of picking things up very quickly, which was good for me.

We found out by email that Wimpey was being sold to Tarmac. Not what you want really. Not when you’ve been at a company that long. There were grown men crying that day.

As for Julian becoming my boss, well, I didn’t really think that much about it, to be honest. It was just sort of a transition I’d expected and was proud of. It didn’t make a lot of difference to us. He’s had a chance to get a little of his own back now and then. I think I was a bit careful when he suggested I came to Bovis as I thought people would be a bit apprehensive about what would happen. I was a lot fierier when I was younger and when I started working with Julian on the Treasury I did have a lot of outbursts. So I learned to stop and think a bit before going off on one.

The biggest change I have seen in the industry is the lack of experience in management and labour that we have now. We are lacking the trade background in the management side. We had some guys around us recently who were just rubbish.

I don’t want to retire. If it was left to me I would keep going for quite a while but I’ve got to think of the wife – have a few holidays and just relax a bit. So I will start cutting it down a bit … soon.

Julian: We are like twins. We have our own way of talking. He always used to say to me ‘no matter how big you get, you’ll never be able to take on your old man’.

When I started working with Julian on the Treasury I did have a lot of outbursts. So I learned to stop and think a bit before going off on one

I left school at 16 because I didn’t want to be there. I became a junior engineer and the labourers and gangmen used to give you a hard time if you got something wrong. I remember one day there was a group of us and something was said and I cracked a joke. I didn’t think anything of it and was leaving the office later that day when this guy grabs me and throws me against the wall. He says: ‘You little shit. Don’t show me up in front of Dano’ – that’s how Colin was known. ‘If you do it again, I’ll kick your head in.’ Then he threw me to one side and was gone. The next night I’m leaving the cabin and he comes walking up again and I’m like, ‘Oh not again’. I was trembling and he says, ‘I just wanted to apologise. I didn’t realise Dano was your Dad.’ This guy was about 6’8’’ and Colin is not the biggest guy by his own admission, but big guys used to quiver in their boots when he got angry. I’ve seen them do it.

He did rule with a rod of iron and people were scared of him. That was the way it was. Whether they were reporting to him or not it didn’t matter – he had the reputation. When I worked nationally with Wimpey’s people, a lot of people had heard of him.

We had an interesting relationship actually. During the day we were best friends as, once I started to get into it, he realised that I was actually pretty good at it compared to my peers. But then once we got home and walked through the door there’d be a hefty telephone bill or I’d leave my boots inside the back door and he’d go ballistic and it was back to having a miserable old git as a father.

There’s a few things they used to say about us as a family. One was that we used to eat concrete for breakfast. The other one was that they reckoned we used to sit down at Christmas Day and instead of having a table cloth, we’d have drawings all over the table.

I was at Wimpey for 18 years and my other brother was there as well, Nick. We had 73 years between us when Wimpey Construction ceased to exist. We were all dyed-in-the-wool Wimpey guys. I used to get a statement from Wimpey every year saying that I had so long until I retired: 49 years and six months. There was nothing that ever suggested to me that I wouldn’t be doing it. It hit us all hard that news. The impact of this for us was the biggest thing in my career.

After Wimpey, we used to talk on the phone for a good hour every Sunday night. And we talked about work. We could have been in the same company the way we were talking. When it’s work, we’re colleagues. We have a good laugh and I give him some stick about being too old now and he gives me it back. You do feel a little bit guilty that you’re working him to death but he does what he wants to do.

Every other Saturday we are at the football together. Most of the time we’re putting the world to right. It’s a good thing to do. It’s quite cleansing for me. If you have a tough week it’s good to sit down and have a chat.

The work ethic that he left us with is terrific and there are senior guys here in Bovis that just dote on Colin. He’s worth his weight in gold, he teaches them so much. At first they don’t like it because he gives them a hard time, but everyone goes through the ‘getting to know Colin’ apprenticeship. That was one of the reasons I asked Colin to come and join me at Bovis. Colin never tells you something’s done unless he’s seen it with his own eyes. People still think he’s mad but he’s quietened down a lot.

It was never about [a rivalry between us]. It’s not a job to us, it’s a way of life and we love the life. We are constructors. I don’t think we see each other as father and son or whatever. Probably it’s hardest out of all of us for my brother Nick, as he’s making a name for himself in project management. It’s difficult for him as I’m his brother and people know that. I think apart from that, if you asked any of us if we would change any of it, I don’t think we would.