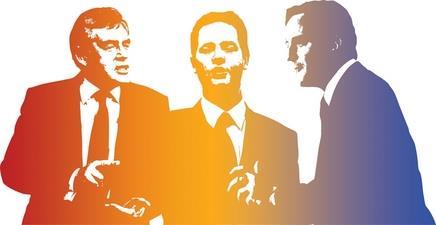 The parties got their campaigns officially under way this week. So on this page we look at what Labour and Conservatives are proposing. Nick Clegg writes us a letter, we have a chat with our floating voters and check the web poll

David Cameron is clearly a man untroubled by symbolism. The decision to launch his manifesto at Battersea Power Station has raised more than a few eyebrows among those elderly enough to remember Pink Floyd’s Animals album: they immediately associated Conservative party promises with flying pigs. (See the Conservative and Labour manifesto comparison PDF below the story)

There is a precedent, though. Back in 1988, Margaret Thatcher fired a laser gun at the venue to commemorate the launch of the project to build a theme park. It was due to open within two years, but turned out not to be feasible. Which, in 1988, is saying something. Political commentator Anthony Painter pulled the historical threads together neatly: “Launches by Tory leaders in Battersea Power Station,” he blogged, “seem like a good idea at the time. They tend to have impeccable PR. But costs escalate, the foundations decay, and the edifice is left in a state of dereliction.”

That’s certainly the view of the party’s Labour counterparts, who have continued to criticise the Tories’ plans – among them the plan to scrap the proposed 1% national insurance rise – as unaffordable. But although much of the rhetoric around the campaigns has remained consistent, the launch of the manifestos this week has begun to differentiate the parties.

The position on cuts is still a mystery wrapped in an enigma, but the Tories’ ambition to find £6bn of “wasteful” public spending means that all departments apart from health and overseas development must wait and tremble.

Despite this, the Conservatives’ policies on NI and corporation tax will probably appeal to construction voters. At least one of our floating voters is leaning towards the party as a result, and our latest web poll – conducted after the NI issue came to light but before the manifestos had been digested – shows the blues gaining support. But a hung parliament still looks realistic.

We outline the state of play between Labour and the Tories. The Liberal Dems’ manifesto was published as Building went to press. So we publish Nick Clegg’s response to our Charter 284 campaign.

Row of the week

Labour’s plans to raise national insurance by 1% from April 2011 have provoked a backlash from the Conservatives and senior business figures. The row has dominated the opening days of the campaign, with 81 business leaders criticising the plans before being criticised themselves, by the Lib Dem’s Vince Cable, for allowing themselves to be “used” by the Tories. Gordon Brown says the tax is vital to maintain public services; Cameron has branded it a “jobs tax that will kill the recovery.”

Quote of the week

“I just find it utterly nauseating all these chairmen and chief executives of FTSE companies being paid 100 times the pay of their average employees lecturing us on how we should run the country. I find it barefaced cheek. If they are going to wade into this debate, they have an obligation to explain how this national insurance cut is going to be paid for and that is where they are failing. And they are being used.”
Vince Cable, in the Guardian, on the national insurance row

Gaffe of the week

A warning to users of twitter came in the form of 24-year-old Labour hopeful Stuart MacLennan, who had his candidacy for the Scottish seat of Moray withdrawn after posting a series of offensive comments on the social networking site. He might have got away with describing X-Factor losers Jedward as “odious little shits” if he hadn’t also referred to the elderly as “coffin dodgers”, Cameron as a “twat” and Labour veteran Diane Abbott as a “fucking idiot”.

What the floating voters say

Started off leaning to the left. Now he “still has that lilt to the left”.

I’m enjoying listening to the debate, but it seems we’re seeing lightweight skirmishes and policies. The NI argument has not been won by either party, and the Conservatives’ proposal for national service looks gimmicky.

The Conservatives’ plans for free schools and free hospitals, and DIY schools looks to be the first inkling of a real policy divide. But it all seems a bit like micromanagement – it might be too much to hope for radically fresh thinking that would release creative energy. Nick Clegg is not having a good start – he looked lightweight in his TV interview, and I think he really needs Vince Cable alongside him.

The Conservatives are being quite clear about their intentions. They seem to be putting a lot of effort into local power, and lowering corporation tax is good. There’s also the reversal of the NI rise, although that won’t make a huge difference. Labour have whispered of business growth funds, but I’d need to see some detail.

It was interesting that Gordon Brown was in Stevenage the other day. It’s a Labour-dominated constituency and they’ve never really made the effort before, whereas Tory candidate Stephen McPartland has spoken at the business club and has visited our business – a good ploy. I wonder if Labour see him as a threat.

Starting position: Leaning towards Labour. Now: split between the three

So far the campaigns have all been a bit bland. Almost nothing stands out except that the Conservatives would carry on Labour’s plan to renew Trident. Why do we still need this? I would probably vote for anyone who’d scrap it. Lots of David Cameron’s ideas are gimmicky. Like the plan to loan households £6,500 over 25 years for green improvements. I like the idea but people will take the money and spend it on other things. Neither am I impressed that they’re against the third runway at Heathrow – it’s good for construction and I don’t have a problem with air travel.

Simon Flatt, managing director of Flatt Consulting, Surrey.
Last week he was sitting on the fence. Now: will not vote Lib Dem, at least.

Nick Clegg lost my vote this week after he appeared on TV and displayed the leadership skills of a blancmange. He’s lost all credibility. Cameron’s upped his charisma and Brown has found his – he’s actually been laughing and talking to normal people. They’re both too light on detail though. If Labour puts NI up, it will affect our business, but if we need to do it then fair enough. The Conservatives say they’re against that but they don’t offer a convincing alternative.

Last week was favouring Labour. He still is.

I’ve found the past week fascinating – mainly because we’re in a fairly straight-talking industry and I marvel at how politicians constantly evade the truth. My job is heavily reliant on the public sector so I’m pretty uneasy that neither the Tory or Labour manifesto makes clear what areas of capital spending they’ll cut. There are gaps in all the parties’ numbers and this is because none of them really know where the money we need to pay off our debt will come from. At least Labour has been honest enough to say we need to put up NI. I don’t think the Tories are being upfront when they say we can find all the money we need simply by making the public sector more efficient.