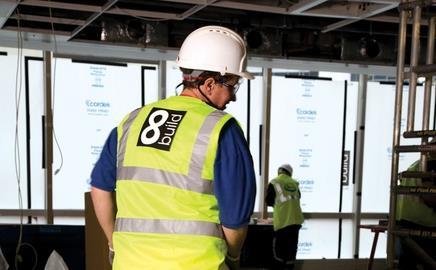 It’s what today’s wardrobe-challenged operative has been waiting for: a high-viz construction kilt that combines tradition and style in everyday workwear. We give you a sneak preview – before Karl Lagerfeld gets in on the act.

‘I thought it was a wind-up, at first,” says pipe-fitter Peter Sherti. But no. Robert Karlsson, project manager at services firm 8Build, was serious when he offered a full English breakfast to anyone prepared to wear a high-viz kilt on site.

Sherti has gamely agreed to test out this surprising take on personal protective gear, which was recently launched by Swedish manufacturer Blåkläder. The idea emerged from Gothenburg’s School of Industry Design, where student Marcus Jahnke won a competition launched by Blåkläder to combine tradition with everyday workwear.

“To be honest, I probably would have done it anyway,” Sherti reveals. “On holiday in Palma we dressed up in women’s clothes … although I was very drunk at the time.”

Indeed, Sherti is taking to the idea with disturbing enthusiasm. “Am I putting it on right?” he asks eagerly as he fiddles with the kilt. The garment wraps around the hips like an apron and has a number of button holes for a snug fit.

Before he can test out the kilt, he needs to get clearance from health and safety to have bare legs on site. “This might be an issue,” says Karlsson, as we wait tensely for an answer. There’s relief all round when Sherti’s legs are given the green light – as long as he doesn’t work with any machines, that is. This, perhaps, casts some uncertainty on the future of the construction kilt in the UK, but we carry on with our experiment regardless.

As soon as Sherti arrives at the site, we hear laughs and whistles. “Hello, lady,” one builder yells, while others shake their heads. “You can’t take him seriously in that get-up,” says another.

Everyone is bringing out mobile phones to capture the moment. “You look absolutely shocking,” someone says, but Peter is undaunted. He poses happily and even pirouettes, causing the kilt to flair out alarmingly. It is not clear whether he has opted for the full-on Scottish approach to kilt-wearing. He does offer this clue though: “It’s a bit drafty but it feels alright.”

My dad is Scottish, but even he would never let me wear anything like that. You could get caught in a machine
8Build employee

So taken is he with the garment that he reckons he’d even buy one – albeit “only if everyone else does” – but at £53.85, the high-viz kilt doesn’t come cheap. Sherti’s standard working jeans wouldn’t usually cost more than a tenner.

At this point Karlsson decides to slip into the second kilt Building has brought along. In a sober black 350g cotton weave, this one is slightly less in-your-face than Sherti’s luminous yellow design.

I ask if being from Sweden means he feels any more at home in the Blåkläder kilt. He tells me that the large front pockets, hammer loops and screwdriver pockets are in fact typically Swedish. “All work clothes in Sweden have these pockets, “ he says. “They are standard.” Kilts are not.

But this may be about to change. Oddly, these kilts seem to have gone down very well in their country of origin; the manufacturer says 5,000 have already been sold in Sweden.

So, could it catch on in the UK? Perhaps, if everyone was as enthusiastic about them as Sherti. Unfortunately, his colleagues don’t seem too impressed. “My dad is Scottish, but even he would never let me wear anything like that,” says one. “You could get caught in a machine – it’s definitely not my cup of tea!”

But then there’s a glimmer of hope – a group has gathered to compliment Karlsson’s black kilt. “I’d wear that one on a night out. I like the jolly factor of it,” says one admirer.