For love and money: One in three QSs face takeover 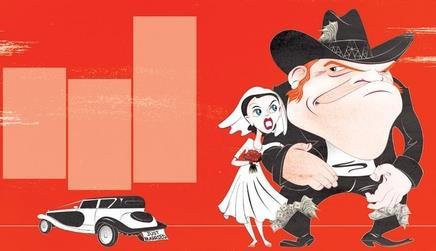 The word is that one in three UK consultants is facing a takeover – with many set to be married to US engineers. Roxane McMeeken plays Cupid …

After months of flirting, it looks as though the UK consultancy sector’s suitors are getting serious. First, Deloitte tied the knot with Drivers Jonas, creating a £110m outfit. Now, it seems that Davis Langdon and US engineering giant Aecom have been in talks since before Christmas about becoming more than just good friends.

David Sparrow, an EC Harris board member, reckons that 30% of the UK’s consultants could be married off this year. And, in particular, it’s those brash US engineering-led firms – like Aecom, Jacobs and CH2MHill – that are casting meaningful looks at our more traditional and demure QSs. So with Valentine’s Day upon us, what better time to ask: who will pair off next?

You could make a case for a strictly British affair, of course – say, between Currie & Brown and Cyril Sweett. Certainly, some senior mergers and acquisitions professionals believe this would be a neat fit. One says: “Currie & Brown do most in the public sector whereas Cyril Sweett are big on the commercial side.”

Nor have European buyers such as Grontmij, Ramboll and Arcadis gone away, but right now its transatlantic couplings that seem to be exciting the most chatter. It’s easy to see why US firms are interested. Francesca Raleigh, an analyst at Numis, says: “American companies have so much higher ratings right now, whereas UK companies’ valuations are so low that they represent great opportunities.” Rob Smith, senior partner in Davis Langdon, says UK consultants are also alluring because they are established in rapidly growing markets such as China, India and the Middle East.

Buying a QS would also gain an engineering firm a higher position in the construction food chain. Richard Steer, managing partner of Gleeds, says: “Big QSs are closer to the client and they tend to be more profitable than engineers because they command bigger fees and employ fewer people.” Engineers’ fees are usually below 1% of the contract value, whereas QSs are making at least 1.5% in the current market.

Despite their higher margins, the UK QSs are vulnerable to takeover, as they are grappling with unpaid fees in the Middle East, redundancy costs and falling fees, turnover and profit. Some are further weakened by debt. Others, like Gardiner & Theobald and Davis Langdon took on expensive headquarters at the height of the boom that may prove a struggle to maintain.

From a UK perspective, a match has its advantages, too. Steer says: “The big QSs are all still owned by partners, which makes it very difficult for them to undertake a serious global expansion. I mean, you just can’t ask partners to stump up for a £700m acquisition in Australia.”

However, it’s not all roses and chocolates. One economist argues that the companies’ cultures may not fit. “Can you imagine American engineers clumping though the pristine offices of G&T in their muddy boots?”

Steer agrees that it would be preferable to be bought by a Deloitte. “Wouldn’t you rather move up the food chain by joining a management consultant than be dragged down to the construction coalface by an engineer?” He swears that Gleeds is not about to be bought: “We would lose our identity, and anyway I’m nowhere near retirement!”

Whatever happens, one boss of a large QS says: “We could be seeing the end of the large independent QS and we’re all going to watch the first deal involving one of them very closely, particularly because we want to know what we’re all really worth.”

He adds: “The future model could be massive firms that can build things like Crossrail or the Channel Tunnel single handedly … But you have to wonder whether you want the built environment to be created by mega firms like that.”

The realities of marriage do sometimes get forgotten in the whirlwind of romance. With this in mind, Building has spoken to analysts and QS insiders to assess the compatibility of Davis Langdon and Aecom and the chances of a successful union. We have also considered possible matches for G&T and EC Harris – two other British belles of a certain age, size and reputation – and rated their chances of a happy marriage …

In January Davis Langdon revealed that its European and Gulf business, which includes the UK, suffered a 55% slump in pre-tax profit last year despite a rise in revenue of 6% to £208.3m. However, senior partner Rob Smith says the company has no debt at global group level and global revenue rose to £338.5m in 2009; global earnings are forecast to grow to £61.1m in 2010, up from £51.1m in 2009. He adds that the firm is transferring and recruiting staff to Asia, Australia, Africa, the Middle East and Libya and hiring in London as a result of this growth.

Nonetheless, the support of a big firm would relax pressure on profit and overheads, such as the firm’s prestigious headquarters. Also, only 31% of its work was in the public sector, according to its 2008/09 annual review. So, with so much international work being funded by governments, Davis Langdon could benefit from a parent with a larger stake in the public sector. Aecom’s last annual report, for 2008, showed that 64% of its global revenue came from there.

Smith strenuously denies Davis Langdon is under any pressure to sell but admits it would consider an offer from a large international player. “Its vision would have to align with our goal to become the leading global consultancy,” he says.

The pundits reckon Aecom is the best bet for Davis Langdon because it’s less of a hardcore engineer than, say, Jacobs or Bechtel. One senior source says of the £3.7bn engineering giant: “It has a reputation for focusing on design and masterplanning, which would complement DL’s management consulting style better than a rougher engineer.”

Also, Davis Langdon’s low profile in continental Europe would not be a problem for Aecom, which is well represented. Meanwhile, Aecom would gain a substantial QS operation – some 61% of Davis Langdon’s business is cost management, with the rest split between services, such as project management and management consulting.

Gardiner & Theobald has the reputation of being the most blue-blooded of the big QSs, so the chances of a culture clash if it paired off with a US engineer are high. It also has more cash in the bank than Davis Langdon, going by each of their latest annual reports, which puts it under less pressure to sell; its last accounts show that cash rose from £10.4m to £22.6m, for the year to 30 April 2009.

But its margins are under strain, with the latest results showing that pre-tax profit had fallen 15% to £21m despite a 7% rise in turnover to £143m. If G&T did form an attachment to a US firm, perhaps the best fit would be one with some experience of the way Brits do things. The $6.4bn-turnover CH2MHill is employee-owned and is working in London alongside UK firms as part of the CLM consortium overseeing the Olympics.

And if G&T wanted to expand its reach, as Gleeds’ Steer suggests the big names all do, CH2MHill could be a good match on this basis, too. The area that G&T should be targeting is Asia, which according to the last financial review contributes only £600,000 of turnover,against £6.7m from the Middle East, £15.6m from Europe and £11.3m from North America – and CH2MHill has offices in China, India, Malaysia and the Philippines.

EC Harris’ Sparrow insists the firm is not for sale. “We value our independence too much,” he says. That said, in terms of culture, the practice is seen as the most likely to hit it off with a US suitor. One consultancy sector veteran says: “EC Harris has always been seen as a more commercial firm and a good company, so they’re attractive to buy and would probably adapt best to being absorbed.”

The self-styled “built asset consultancy” therefore might be best placed to cope with a takeover from Jacobs. Pundits see the £7.4bn-turnover firm as one the grittier engineers but one with an excellent, no-nonsense reputation, which chimes with that of EC Harris. It also has $1bn or so in the bank, which one analyst says would mean it would “barely notice” the acquisition of a large UK consultant.

EC Harris’ last results revealed that its pre-tax profit was £41.1m for the year to April 2009, down only slightly on the previous year’s £41.4m, and revenue was up 15% to £306m. So, it would undoubtedly benefit from a financial boost as, like the other QSs, it is suffering from shrunken margins. Its cash position remains unclear as the firm has yet to file its 2009 accounts with Companies House.

But unlike the G&T-CH2MHill scenario, EC Harris is already in many of the same markets as Jacobs. Some 40% of its business is international and it is gaining ground in infrastructure and energy, including nuclear.

Its worth remembering, too, that EC Harris is already in two serious relationships. It has a nuclear-focused joint venture with Turner & Townsend and an occupier solutions one with Cushman & Wakefield, so we can’t rule out the possibility that EC Harris might commit to one of these firms more fully …