Back in 1992 Building paid a visit to site of Waterloo train station’s international terminal, which opened in 1994 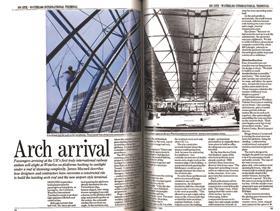 This week’s cover feature examines the £320m upgrade of Bond Street underground tube station in London, which is set for completion in 2017. A similar project, which Building visited during its construction, was the development of Waterloo train station’s international terminal, which opened in 1994. The station served as the capital’s original gateway for trains arriving from Europe via the Channel Tunnel, before it was replaced by St Pancras International in 2007. Speaking on its construction, James Macneil described how designers overcame building the terminal’s twisted roof and airport-style terminal on a restricted site. Focusing on the complex roof design, he said: “Although no more than half-built, the three-pin arch roof spanning the platforms already dominates the site. Formed from blue, banana-shaped, bow-string trusses springing from stub columns on the platform slab’s edge and pinned together at the centre, the colonnade catches the eye from any angle. At the northern end, where the stainless steel and glass cladding has advanced several bays down the platform, the train shed roof resembles a 21st century greenhouse.”