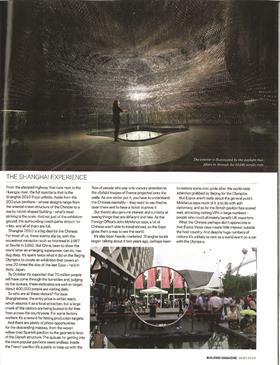 In at the sharp end

With preparations underway for Wolfgang Buttress’ “Grown In Britain” design for the British pavilion at this summer’s Milan Expo (see page 40), it gives us the excuse to revisit the British entry to the last expo, held in Shanghai five years ago. Thomas Heatherwick’s “Seed Cathedral” raised the bar for all future British entrants, with its 20-metre high, cube-like structure pierced by 60,686 acrylic spikes. Each spike was then embedded with a selection of hand-picked seeds sourced from the Kunming Institute of Botany.

The unique construction of the pavilion threw up a number of obstacles, such as hiring a workforce in China, where the structure had to be built due to volumes required; and the structure’s need to be able to withstand a possible typhoon. On its construction, Stephen Kennett wrote: “About 300 spikes were being installed in a 10-hour shift. But because it was winter and temperatures plummeted to -10°C, another 38 hours had to be added for the waterproofing to be applied, cured and tested so any leaks could be plugged before moving on. The last spike was installed by then British foreign secretary David Miliband in March 2009.”