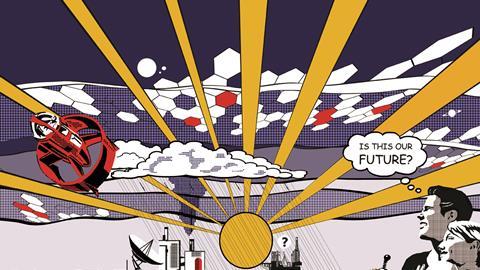 Governments admit they have failed to reduce our co2 emissions, so now geoengineering could be our only option to counteract climate change. Andy Pearson explains how this could involve anything from covering deserts with reflective surfaces to putting a shield for the earth in space. Illustration by Philip Veall

Man-made climate change is happening. Its impact will be massive, serious and unevenly spread; its cost enormous. Until recently the focus of governments around the world has been on climate change mitigation supported by policies to reduce CO2 emissions. The approach has failed; global efforts to reduce emissions have fallen far short of the reductions needed to avoid significant climate change.

In acknowledging their collective failure, the same governments are now adopting climate change adaptation policies. The focus is now on measures to ensure critical assets, such as power stations, water supplies, transport systems and the urban environment, are able to function in a more extreme climate.

But time is running out. According to NASA, “the evidence for climate change is compelling”. The organisation cites a sea level rise of 170mm in the last century, 10 of the warmest years since 1880 have been in the last 12 years, with temperatures regularly setting new records, and increasing numbers of intense rainfall events. Clearly we need to buy more time to find solutions, which is why scientists are starting to give geoengineering serious consideration.

Geoengineering is the deliberate large-scale manipulation of the planetary environment to counteract climate change resulting from human activity. There are two main geoengineering categories: carbon dioxide removal from the atmosphere and solar radiation management. Carbon dioxide removal methods address the root cause of global warming, but they are generally slow to take effect and are costly.

Solar radiation management is more of a sticking plaster solution; it comprises technologies to reflect sunlight back into space such as mirrors between the sun and the earth, to help offset the effects of global warming but does nothing to tackle the causes of climate change.

However, Mark Lynas, journalist, author of a number of books on climate change, and speaker at the Ecobuild conference on geoengineering, says on his web post: “the addition of mirrors at the Lagrange point [the point where objects can be placed and unaffected by the gravitational pull of the Earth or moon] between the sun and the Earth would be prohibitively expensive”. According to him, solar radiation management through the addition of sulphates in the upper atmosphere is a more realistic option: “What makes this one scary is that it would probably actually work, and be achievable at reasonable cost of £0.3bn to £1.6bn a year”.

Lynas says geoengineering is an option that must be explored, “even if only as an insurance policy in the event of some catastrophic climatic tipping point”. Some of the more promising solutions are outlined below:

Adding nutrients to the ocean

Carbon dioxide is fixed from surface waters by algae. Some of the carbon they take up sinks into the deep ocean as organic matter and faecal material where it is consumed by bacteria and other organisms re-releasing the CO2 into the deeper water. The ability to draw carbon down into the oceans depths is limited by the supply of nutrients to allow algal growth on the ocean’s surface. Geoengineering sets out to speed up the process by increasing the supply of these nutrients through the addition of nitrogen, phosphate or iron depending on the limiting nutrient in a particular area of ocean.

Carbon dioxide is naturally removed from the atmosphere by processes involving the weathering of carbonate and silicate rocks, which are the most common types of rocks on the planet. The rock’s silicate minerals react with CO2 in the atmosphere and oceans to form carbonates. Over time this weathering will decrease CO2 concentrations, however, the rate at which these reactions take place is around one hundredth of the rate at which CO2 is currently being emitted. As a result, there are a number of geoengineering proposals to artificially increase the rate of CO2 absorption including:

This is not as easy as it might at first sound because CO2 is present in the air at concentrations as low as 0.04%. Small scale commercial systems already exist for industrial processes but, as yet, there are no cost-effective large-scale solutions. Air capture systems will require energy inputs and the CO2 removed would need to be stored.
The three technological possibilities under consideration are:

This solution involves speeding up the rate at which atmospheric carbon is transferred to the deep sea by using vertical pipes to pump water from deep in the ocean to the surface and to promote downwelling of dense water in sub-polar oceans. The effectiveness of this is limited and there is a danger that disturbing existing circulation patterns may even release more carbon into the atmosphere.

Painting roofs, roads and pavements white would increase the albedo (the ability of a surface to reflect energy back into space) of less than 1% of the land surface, too small an area to have a global impact. It would also be expensive to implement.

Crops and grasses make up a much larger area so there is a suggestion that by careful choice of crop and grass species it may be possible to increase the reflectance of vegetated surfaces. Modelling suggests that summertime cooling of up to 1°C may be possible in Northern Europe and North America but the consequences of large-scale changes in land management would be huge.

Hot deserts make up only 2% of the earth’s surface. However they experience high levels of solar radiation so one proposal is to cover these areas with a reflective surface. Locally the effect would be significant, but the ecological consequences of covering deserts with man-made materials are unknown and this approach has the potential to change atmospheric circulation and the occurrence of monsoons.

Whitening clouds over the oceans by spraying sea water high into the air would produce localised temperature reductions. A spray generator has yet to be developed capable of the task and a fleet of up to 1,500 vessels would be needed to carry the units. As a short-term solution seeding clouds from aircraft is a possibility. However there are concerns that the cooling effect could affect ocean circulation patterns.

Evidence from volcanic eruptions has proved the potential of sulphate aerosols to reflect sunlight, although other forms of aerosol are being considered. Stratospheric aerosol methods have the most potential of all solar management techniques because they could produce large and rapid global temperature reductions by reflecting sunlight. In addition, their effects would be more uniformly distributed than for most other methods and they could be readily implemented.

Space-based geoengineering solutions involve positioning sun shields in space to reduce the amount of solar energy reaching the earth. Proposals include placing mirrors in orbit around the earth, creating a Saturn-like ring of 2 billion tonnes of dust particles in the equatorial plane to shade the tropics.

Another solution is to place about 3 million km2 of reflectors at the point between the earth and sun where the gravitational attraction between the two bodies is equal. Proposals for the sunshade include a mesh of aluminium threads about a millionth of a millimetre thick, trillions of reflecting discs fabricated in space from asteroids, and a reflector of lunar glass, which could be made on the moon. Another possibility is a cloud of 10 trillion refracting 600 mm diameter discs fabricated on earth and launched into space, a million at a time every minute for about 30 years.

If long-term geoengineering is adopted then the Royal Society suggests in its report Geoengineering the Climate that these methods might eventually become the most cost-effective option, although development of the necessary technology is likely to take many decades.

SMART GRIDS: COMING DOWN TO EARTH

There is a pressing need to accelerate the development of low-carbon energy technologies to address climate change, energy security and economic growth. While geoengineering is an unproven solution to tackling the global challenge of climate change, the use of intelligent electricity networks, or Smart Grids, is a solution that is starting to happen now. Smart grids are important as they enable electric vehicles and renewable energy sources to be integrated into the grid while helping keep electricity networks reliable and affordable.

In the UK, the grid carries electricity from centralised power stations to consumers through wires, substations, transformers, switches and much more. However, in its existing form the grid faces a number of challenges including the need to guarantee security of supply from an aging infrastructure, the need to lower carbon emissions and the ability to meet continued growth in demand from more and more power hungry devices and electric cars. The grid also needs to be able to integrate the variable outputs from renewable energy sources, such as wind turbines. Smart grids offer ways to meet these challenges and also to develop a cleaner energy supply that is more energy efficient, more affordable and more sustainable.

Smart grids are not one technology but a series of interconnected, intelligent technologies. Consumers will modify the way they use and purchase electricity through technologies such as smart meters. Because energy costs can be priced in real time, consumers can decide when to buy electricity based on price or through price signals relayed to smart home controllers or consumer appliances like washer/dryers, which process this information based on the consumer’s wishes and power-on accordingly. There are even initiatives to use electric cars to store power, temporarily, before supplying it back to the grid.

Smart Electricity operators will use real-time monitoring and display over large geographical areas to optimise the performance of the power system. It will enable information exchange between electricity producers and consumers to manage the transport of electricity from all generation sources, including renewables and small-scale chp systems to individual appliances to enable the near-instantaneous balance of supply and demand. “In my opinion, technology will provide an important driver in the coming years with high performance, low-cost and web-enabled control integration using platform independent, open protocols; this may be enabled by the infrastructure for smart metering and demand response controls,” says Jeremy Watson, a director of global research at Arup and chief scientific adviser for Department for Communities and Local Government.
In addition there are a series of transmission enhancement technologies that can also be incorporated along with the performance-based maintenance of network components to enable networks to operate as efficiently as possible, minimising cost and environmental impacts while maximising system reliability.

In the USA, the Department of Energy estimates that if the electricty grid were merely 5% more efficient, the energy savings would equal the fuel and greenhouse emissions from 53 million cars, it is a change could go part of the way to reducing the need for geoengineering.