6
Go with the flow
Focus

Go with the flow 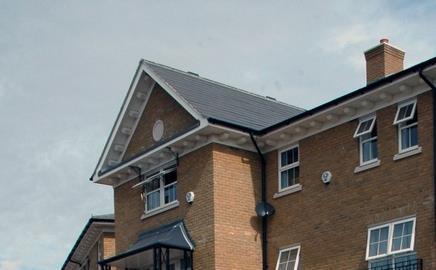 Urbanisation, and the resulting increase in hard landscaping of roads, driveways and parking areas, has dramatically reduced the capacity for natural drainage. This, combined with predicted rainfall changes such as sudden downpours due to climate change, could result in increased flooding.

Sustainable urban drainage systems, or SUDS, aim to replicate natural drainage patterns and so reduce rainwater flow rates and volume, thereby managing and limiting the impact on existing drainage systems and water courses. SUDS techniques include green roofs, grassed filter strips and swales, infiltration devices, ponds and concrete block permeable pavements (CBPPs). Sustainable drainage systems usually involve combining different techniques as a “management train”, but CBPPs can be used in isolation, particularly where rainwater needs to fully infiltrate into the ground, rather than be diverted into sewers or storage.

CBPP, which was once seen as novel and experimental, is now an established technology. It allows rainwater to filter through a paved structural concrete surface for temporary storage before it infiltrates into the ground, is reused or released to a water course or other drainage system. CBPP technology is now established enough to form part of planning guidance and Building Regulations, as well as the Code for Sustainable Homes.

CBPPs are suitable for a wide variety of residential, commercial and industrial uses. They are particularly useful for car parks, residential roads and cycle paths but are also capable of more heavy-duty uses, such as for ports, harbours and industrial areas. CBPPs optimise land use by combining two functions: the trafficking and temporary storage of surface water from the pavement itself, as well as from adjacent roofs and impervious pavements.

There are three forms of CBPP construction:

Conventional drainage systems can concentrate pollutants, which are washed from the surface and flushed directly into the drainage system during rainfall. In the case of CBPPs, the pollutants are flushed into the underlying pavement layers where they are filtered and trapped. Many pollutants, such as hydrocarbons, may degrade over time, but other contaminants such as heavy metals do not breakdown and may remain within the pavement structure for a long period (further information on water quality may be found in CIRIA reports C582 and C609).

As such, SUDS is a design philosophy that uses a range of techniques to manage surface water by attenuation and filtration.

Design values based on research estimates of the pollutant capability of permeable pavements are given in CIRIA C609 as:

In addition, CBPPs can negate the need for interceptors with all their subsequent maintenance demands and no-infiltration systems are particularly suited to brownfield sites to prevent flushing out of contaminants.

Although the benefits of CBPP and SUDS are increasingly being recognised there is still some way to go. This is evident from the government’s Code for Sustainable Homes. The code clearly recognises SUDS as a means to achieve the minimum standard for surface water management. It also points out that SUDS are generally no more expensive than traditional pipe drainage, while issues of site size and density requirements can influence drainage design more than cost. Here, CBPPs can provide the car parking, drives or roads while providing surface water attenuation and treatment without using more land.

Despite this, the code fails to recognise the issues of water quality and the potential for water harvesting. The BRE EcoHomes programme also has these omissions. This is surprising as SUDS techniques such as CBPP are encouraged by the government’s planning policy document PPS23 Planning and Pollution Control for these very reasons.

If the government is serious about sustainability then the code should be re-examined to include a greater emphasis on the re-use of water on site. There should also be the inclusion of the aim to ensure that water discharged from a site after it is developed should be no worse than discharge before development and that sustainable drainage systems such as CBPPs should be used in order to minimise the amount of land needed.