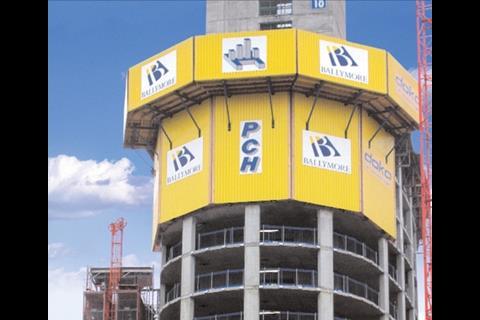 The Doka Windshield is guided by a climbing system up the side of a structure, which allows large units to be hoisted quickly with minimal crane time 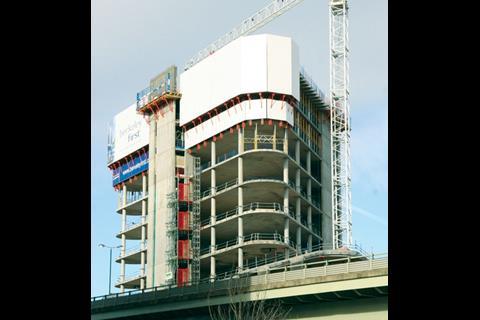 Climbtrac has been used on large multi-storey projects throughout the UK, Australasia, USA, South America and Dubai

Working on high-rise developments demands two major requirements: the provision of a safe working environment and the reduction of weather-related downtime. A new generation of enclosed formwork meets both needs. Andrew Minson, director, technical services and head of structural engineering at The Concrete Centre, reports

A boom in high-rise building is obvious in many city centres. Fuelled by growing shortages of land, a trend for city centre living and the wish for statement architecture, high-rise construction is certainly on the way up. However, there are many potential hazards related to working at height, and exposure to the elements can lead to downtime if the weather turns nasty.

A new generation of formwork for concrete structures addresses these issues full on. Workers on the recently completed 29-storey Ontario Tower at New Providence Wharf in East London benefited from the provision of the Doka Windshield. The system ensures that workers stripping and re-erecting the falsework are protected from the elements and any potential falls from the slab edge. The system also protects workers below from any falling objects. On this project, there were nine platforms on site, each of which covered four storeys.

The Windshield comprises an enclosure that fully protects the slab edges – preventing even the smallest piece of rubble from going over the edge. A climbing system guides the Windshield up the side of the structure. The system is safe, fast and efficient. It allows large units to be raised quickly with minimal crane time. When the unit reaches the next level, the system automatically latches into place. This not only simplifies and speeds up the repositioning operation but also ensures a high degree of safety as the system is secured to the structure at all times. On the Ontario Tower project concrete contractor PC Harrington typically took less than 10 minutes to move a platform.

On the project the system proved its adaptability. At the top of the tower the roof tapers and perimeter walls are introduced. Doka redesigned, with minimum modifications, the Windshield platforms to allow the external formwork to be supported with protection of the workforce.

Protection from the elements was also a prime consideration for the development of the RCS P by Peri. The system provides safe and secure edge worker protection at three concurrent levels, two of which are at full storey height (backpropping floor and main decking floor) with a third 2.7m high overrun giving protection from high winds and difficult weather conditions.

The system was used by concrete frame contractor AJ Morrisroe & Sons for the Paragon development adjacent to the M4 elevated section in Brentwood, London. The close proximity of the motorway to the site called for a demanding series of health and safety requirements. Additionally, the use of

post-tensioning meant restricted access for workers working up to 50m above ground. The Peri RCS P provided the safe working environment where workers felt secure enough to concentrate on the job in hand and so ensure that the project progressed to schedule.

In addition to the RCS P system, the contactor also used Peri Skydeck for slab construction. This is assembled from below and so it reduces the risk of falls from height. As it is comprised of modular units, Skydeck can be fixed by semi-skilled labour and quickly erected to enable the achievement of a 10 working day cycle for each floor. The system’s adaptability accommodated the changing imprint of the 12-storey block. Up to the fifth floor the floor area was 800m2, and from the fifth to the 12th floor the plan area was 500m2. Concrete slab thickness varied between 250-325mm up to the fifth floor with the upper floors being 250mm thick post-tensioned slab. Skydeck also met the demands of a building that is triangular and without level soffits for the first five floors.

A further self-climbing formwork system is available from SGB. Developed for the construction of high-rise concrete cores or bridge piers, their Highriser system is able to operate totally independently of a crane after an initial set-up and then hydraulically climbs up the structure. The system is available in either Jumpform or Climbform. The Jumpform system climbs within a confined core with a steel table cantilevering out over the external walls to support the external shutters and platforms. The Climbform system climbs up the external face of the wall only.

The units are jacked up by a series of interconnecting hydraulic jacks. The bearing feet of the frames are always maintained at a low enough distance from the pour level so that the concrete curing time is not a critical issue. The basic climbing units can be used with either steel-faced forms or ply-faced forms and the system is versatile enough to cope with any shape of structure whilst changes in plan dimensions can be simply designed into the frame.

Fully enclosed formwork is also available from Ischebeck Titan. Their Climbtrac system is a vertical track-based system that enables workers to move a platform together with the necessary formwork up the face of a building without the need to disconnect and reconnect to the structure. It comprises a pair of triangular frames, with guide wheels and catching devices for support, which run up a vertical track of two steel beams bolted in sections to the building’s wall.

Platform support channels are connected to the frames to support the working deck and shutter rolling equipment. This equipment consists of levelling brackets and wheels which run on two guide tracks located on the deck to allow the shutter to be rolled to and from the face of the structure being formed.

Full height safety screens connected to the rear and side of the platform with HT bolts complete the system. The system is permanently held captive to the structure during construction and repositioning. This is a major benefit as it reduces the likelihood of the system being inoperable during high winds. It also ensures quicker and easier repositioning for assured continuity. During construction the Climbtrac system is lifted vertically along its track by crane. When one storey is complete, the shutters are simply rolled back from the concrete, new track sections are fitted and the system is hoisted to the next storey and provide the workforce with all round protection instilling a high degree of confidence in the safety of their working environment.

What these different formwork systems have in common is their ability to foster a high level of concrete confidence for high-rise construction due to the provision of a safe and more efficient working environment.