Hackney Empire vs Aviva Insurance: The Empire strikes back 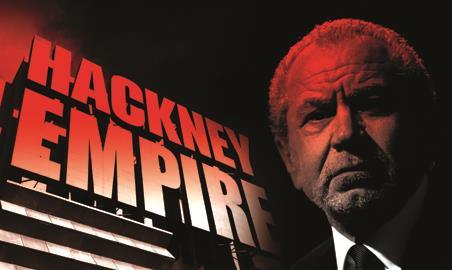 This is the tale of a theatre project, backed by Lord Sugar, that landed its client with a £3.2m headache. Now eight years on there’s a legal battle over a bond between the insurer and the theatre owner

As viewers of the BBC’s hit TV show The Apprentice will know, you don’t let Alan Sugar down lightly. But that’s exactly what contractor Sunley Turriff did when it went into administration in the middle of a £11m refurbishment job on London’s historic Hackney Empire theatre, on which Lord Sugar is the main benefactor.

It’s easy to imagine the tycoon’s fury at having to tell his celebrity friends that the grand re-opening of the century-old theatre would not happen in September 2003 as planned. It eventually opened four months late, incurring £3.2m losses through delays and lost revenue.

However, Lord Sugar could have taken some comfort knowing that in 2001 the Empire had executed a £1.1m bond from insurers Aviva to cover any damages up to that value caused by breaches of the building contract by Sunley Turriff.

Unfortunately for Hackney Empire, Aviva has disputed the claim it then made. According to legal documents for a case now going through the High Court, Aviva said the bond did not cover the contractor going into administration. It also claimed that after several key meetings, one of which was chaired by Lord Sugar in 2002, Hackney had decided to offer financial help to the contractor and in making that payment it had invalidated the bond.

This is a case that highlights the problems that could lie in wait for clients and contractors that rely more and more on bonds. Bond conditions are very strict and when projects hit the rocks an increasing number of claimants are left disappointed. Which is why some in construction feel it may be time for the industry to re-examine the role of bonds and to consider if it might be better to stop using them altogether.

According to documents filed with the Technology and Construction Court, the Hackney dispute centres around a £1.1m conditional bond that Hackney Empire asked Sunley Turriff to take out to cover breaches of the building contract. Conditional bonds are the most popular type of bond that clients and main contractors demand from their supply chain members.
But their popularity is in spite of the fact that there are often disputes over their proper application and when payment should be triggered.

﻿The theatre’s first season of productions and the Christmas pantomime Aladdin had to be cancelled and tickets refunded, contributing to a £3.2m loss

Hackney Empire Ltd vs Aviva Insurance UK is one such case. Sunley Turriff began work on the refurbishment of the theatre in May 2001 and agreed the bond with Hackney Empire and Aviva three months later. Hackney’s writ claims that problems started to crop up on site from the outset in 2001 and that the contractor began suffering from cashflow problems, resulting in the firm missing both an initial extension to the September 2002 completion date and the revised deadline of July 2003.

Court documents say that in October 2002, at a time when the contractor was arguing for an extension of time and loss and expense, Lord Sugar stepped in to chair a “without prejudice” meeting between the theatre and Sunley Turriff to thrash out a workable solution. After further meetings Hackney Empire agreed to pay Sunley Turriff £1m to help ease the contractor’s cashflow problems and allow it to complete work on site.

But in July 2003, despite having received £750,000 of this money, Sunley Turriff went into administration and abandoned work on the project. Reports from the time suggest 80 subcontractor workers walked off site after hearing the news, some in tears.

The project was thrown into chaos and Hackney Empire claims it was landed with a number of unpaid subcontractors. The theatre’s first season of productions and the Christmas pantomime, Aladdin, had to be cancelled and tickets refunded, all of which contributed to the theatre’s claimed £3.2m loss. It eventually opened in January 2004, only after local contractor Jerram Falkus stepped in to complete the work. Neither the Hackney Empire, Aviva nor Lord Sugar were able to comment on this article.

Hackney Empire and Aviva are not, in fact, arguing over whether insolvency should have triggered payment of the bond, despite the fact that many clients assume they are covered for this eventuality. In 1994, the case of Perar vs General Surety in the Court of Appeal set a legal precedent that insolvency gave no automatic right for the client to claim under the bond. As a result of this legal precedent, it is incumbent on the client and its lawyers to prove breaches other than insolvency to secure payment of the bond.

Hackney Empire argued in the High Court in London last week that Sunley Turriff had breached the contract by abandoning the site and by producing defective work. But in its counterclaim one of Aviva’s main arguments is that Hackney had invalidated the bond agreement by paying £750,000 to Sunley Turriff in installments to ease its cashflow problems. These payments had invalidated the bond by changing the risk calculation Aviva took on, its lawyers argued. In its submission Aviva says the payment “was of material prejudice to Aviva because it increased indebtedness of [Sunley Turriff]”.

﻿The sureties have never been keen to pay out. disputes are common and often end up in court

Hackney Empire has been left fighting for payment of a bond it had originally thought was assured. Lawyers say this experience is common. Bond conditions can be a minefield for the unsuspecting client, as insurers are not often keen to part with their cash. “The sureties have never been keen to pay out. Disputes are common and often end up in court.” says Christopher Hill, a partner in law firm Norton Rose.

Alison Cull, a partner in Pinsent Masons, agrees. “These bonds are interpreted very strictly,” she says. “It’s important when you look at a bond to look carefully at the conditions you are required to meet. Certain things will discharge the liability under a bond including amendments which are not materially insubstantial to the underlying contract.”

A spokesperson for the Association of British Insurers says: “Any insurer would look at the claim from a point of view of paying the claim rather than declining it. There’s sometimes a small number where this is not clear cut as there is with any contract.”

Bonds under the spotlight

Unfortunately, disputes over bonds are likely to become more common as tetchy clients and contractors seek maximum protection from projects hitting problems in a dangerous market.

If bonds can be a headache for clients, they can be a life or death matter for contractors. Unlike other forms of client security, bonds typically impose huge significant costs on contractors taking out bonds by tying up their limited assets.

Rudi Klein of the Specialist Engineering Contractors’ Group says bonds are at best an overreaction to market risks and at worst another instrument driving firms to the wall, when failure to secure a bond makes it impossible to secure work with risk-averse clients. “I’ve no sympathy with people who think they’re necessary,” Klein says. “They’re just part of clients’ array of nonsensical weaponry that keep firms tied down and in check.”

So why do so many clients ask for bonds? Hill argues the main reason is to test the solvency of contractors. “The bondsman’s willingness to issue a bond tells the client a lot about the solvency of the contractor,” he says. “To my mind it’s an expensive credit check.”

But Rhodri Pazzi-Axworthy of law firm Nabarro argues clients have no real alternatives. “The main alternative is to put in place a parent company guarantee. But contractors prefer to get an insurer on board as, on the face of it, it’s stronger because you’ve got an insurance provider behind you rather than only the parent company. Contractors would rather do that than put their company on the line.”

Klein is unconvinced by the clients’ arguments. “There’s no replacement for due diligence and making sure you are dealing with solvent contractors,” he says. “The use of bonds goes against the grain of everything the industry is trying to achieve with the construction strategy and other initiatives to encourage more collaborative working.”

A verdict in the Empire case is expected in weeks. But what is clear is that whatever the outcome, the case has put the widespread use of bonds in the dock.

WHAT IS A BOND?

Christopher Hill is a partner in Norton Rose