Hansom: It's tough at the top

Power comes at a price, and this week Whitehall bosses fall out of favour with officials, a council leader is driven to delivering an insulting speech and Prince Charles’ PR machine has a mind of its own

Prince Charles’ speech on environmental engineering at the Institution of Civil Engineers last week was sponsored by Halcrow or - as the heir to the throne repeatedly pronounced it - “Hawlcrow”. But while eyebrows were certainly raised by the Prince’s novel use of vowel sounds, it seems he was correct in his drawling. A Halcrow insider told me: “No-one in the office can recall anyone saying our name like that. But we can only assume that he must have checked the pronunciation or knew what was correct because that is the proper way to pronounce the name of our founder Sir William Halcrow.” They do call it the Queen’s English so perhaps he simply asked his mum?

Still with the Prince’s speech, many of those in the press reported it as an attack on modern architecture, despite the fact that the Prince mentioned his dislike of glass and steel buildings only in passing. But while those close to the Prince are irked by the media’s apparent desire to write the “HRH versus architects” story, perhaps they should be looking closer to home when casting the blame. The Prince’s own website ignored the fact that the main thrust of the speech was about the need for engineers to work more in harmony with nature and instead highlighted the few comments he made that were critical of modern buildings. The news item then boasted that the Prince had put “his own architectural principles into practice” at Poundbury in Dorset - a scheme not even mentioned in the speech. Does someone in Clarence House other than Charles have an axe to grind with modern architecture?

Addressing the annual Zero Carbon Hub conference last week Ray Morgan, chief executive of Woking council, appeared to be channelling the spirit of Ricky Gervais with some close-to-the bone gags. Presenting photos of sustainable mud huts he quipped, “All civilisation came out of Africa it just forgot to leave any in its own place.” Next were tepees, “the only American contribution” to civilisation. This was followed by the lambasting of previous speaker Stephen Noakes, commercial director at Lloyds bank, who had used a picture of a pig with a straw house in his presentation. “If Lloyds bank and others hadn’t lent money on places like those we wouldn’t have had a banking crisis,” said Gervais, sorry Morgan. But no one received more bile than the audience of housebuilders who were told they were “lazy” for not embracing Zero Carbon homes faster. It could have been offensive had his ire not been so wide ranging.

Following the item last week on the high end networking organisation the Chemistry Club, Hansom is happy to point out that Atkins chief executive Uwe Krueger did not pay for the pleasure of attending one of its climate change events held last November. A spokeswoman for the firm said: “For clarification, Atkins is not a member of the Chemistry Club. Our chief executive did attend a Climate Change Forum event as an introduction to the group but no payment was made for attendance.” 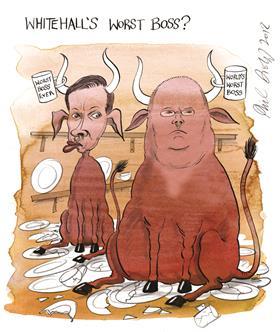 Is Eric Pickles Whitehall’s worst boss? The communities secretary makes great play of being a straight-shooting political bruiser. But it would seem his bull-in-a-china-shop approach has not gone down well with civil servants. The latest civil service survey has found that morale within the Department for Communities and Local Government has fallen 15 points lower than the civil service average. Meanwhile, an Institute for Government (IfG) survey found there had been an exodus of top mandarins from the department since Pickles took over. But he has competition. The survey found a similar exodus from Michael Gove’s Department for Education. Who would you rather work for? Hansom balks at the choice.