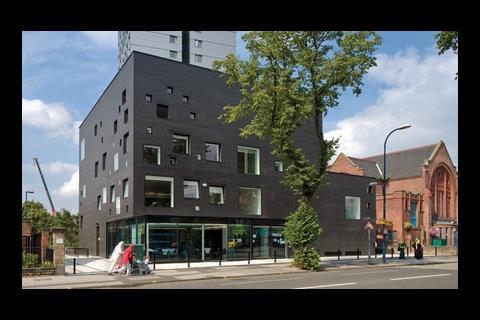 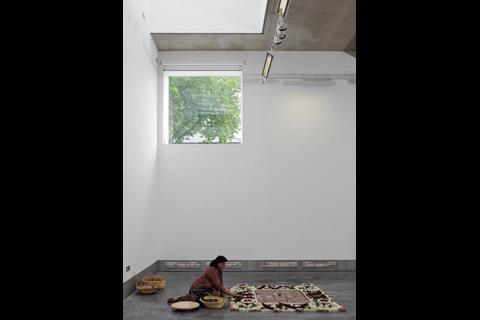 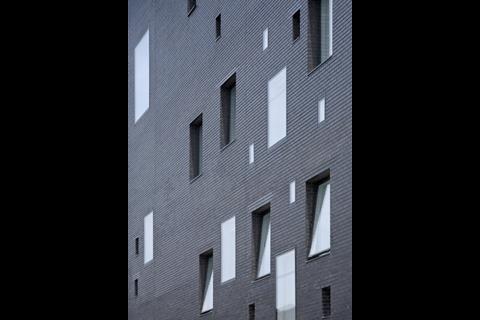 HawkinsBrown’s New Art Exchange for the deprived community of Hyson Green in Nottingham is a black box on the outside, a blank canvas for artists inside.

The Oxo Cube. Even before it opened in September, the New Art Exchange in Nottingham had acquired an unforgettable moniker from locals. And with good reason. As designed by architect HawkinsBrown, the building is quite simply a sharp-edged, four-storey cube (admittedly faced in jet black bricks rather than something in a gravy brown). And its crisp cubic shape is reflected in two dimensions by square frameless windows scattered randomly across its facades.

With such a striking architectural image, the 1,360m2 New Art Exchange attains one of its prime aspirations – to be a landmark. “Certainly this big black building is in local people’s minds,” says its chief executive, Jim Robertson. “But they haven’t quite made the connection as to what it’s for.”

What it is for might be more easily ascertained by browsing the New Art Exchange website than by staring at its facade. It is, the site says, “the first dedicated African, African–Caribbean and south Asian facility for contemporary arts outside London”. It offers a rich mix of visual art, theatre, dance and arts education to residents of all ages and ethnic backgrounds in Nottingham’s deprived inner suburb of Hyson Green. With this objective, the organisation roped in £5.5m in grants from six public authorities, including an increasingly rare Arts Lottery grant of £2.9m. Some £3.1m was spent developing the scheme.

If the building’s abstract and functional style gives away little of its purpose, this is intentional. As HawkinsBrown associate Harbinder Bindi explains: “If we went out to express black African, black Caribbean and south Asian art all in one building, it would become schizophrenic. Instead, the artists we talked to asked for a blank canvas to project their art on to.”

The abstract style also serves the more practical function of adaptability. Aside from the cafe next to the main entrance, the building’s main spaces are currently earmarked to be an art gallery, a performing arts hall, a dance studio and an office. But none of these are designed as such because, says Birdi, they are intended to be interchangeable at a later date.

Nor does the building relate visually to its surroundings, a scrappy mix of rundown Victorian terraces and high-rise concrete council estates. The only linking feature is the brick shell, though not in the ubiquitous red brickwork of Nottingham. The building’s distinctive black bricks, which were made in Holland, have a hard, slightly reflective surface and are only 50mm in height, which adds to the dense, solid crispness of the Oxo Cube.

If we went out to express Black African, Black Caribbean and South Asian art all in one building, it would become schizophrenic

The abstract style culminates in the square frameless windows, which are arranged across the brick facades in a playful pattern that aptly evokes a work of art in the Mondrian vein. They vary in size from large picture windows to tiny glazed punctures, and some are flush with the brick face while others are inset by 110mm with matching black brick slips lining their reveals.

From inside the building, the random arrangement of windows offer fascinating snippets of the surrounding streetscape.

And at night, they give passers-by glimpses of activities and exhibits within the building.

The building’s main shop window, however, displays the ground-floor cafe to the street. “The cafe plays a key role in scooping passers-by off the pavement and leading them into the exhibition space, which is free to visit,” says Robertson. “In this way, we’re slowly engaging with the local community.” And in the same way, the landmark Oxo Cube is slowly becoming the artistic hub of the diverse community of Hyson Green.