George Osborne exceeded industry expectations in last week’s Budget by pumping more than £15bn into a housing market stimulus. But economists fear the measures could do more harm than good 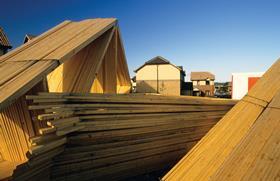 Last week’s “housing giveaway” Budget by chancellor George Osborne has already been described as “economically insane” and “a huge gamble” by some economists. But the measures the chancellor was able to unveil - both a £3.5bn deal to provide equity loans for newly built homes, and a £12bn extension of mortgage guarantees - left housebuilders unable to believe their luck. Most of the listed players’ share prices were more than 5% up on the day - gains that they have so far kept.

With more than £1bn of additional cash for homes to rent as well, the package as a whole was far more than the industry had asked for. Osborne was able to be so generous because he got the Office for National Statistics to write down the investment in a way that does not add it to the annual deficit (see box right). But with criticism intensifying that the package might do more to inflate house prices than promote construction of new homes, the big questions remain of whether it will deliver both the increased build rates in the short term and a sustainable market in the future.

According to the government’s figures, the equity loan scheme alone could prompt 25,000 new homes sales a year. This is on top of the existing £480m FirstBuy scheme, already a major support for the industry, with one housebuilder, Persimmon, expecting to see it generate in excess of 3,000 sales over the next year - a third of the company’s output.

But the new scheme will be even more generous to housebuilders than FirstBuy - “pretty bloody generous”, according to Stuart Adam, senior research economist at the Institute of Fiscal Studies (IFS), the think tank that scrutinises the Budget in detail each year. Under the new scheme, the government will put up all of the 20% loan for homebuyers itself, instead of both builder and government being required to make a 10% equity loan, as is the case under FirstBuy. This is good news for housebuilders, which are able to participate in the scheme without tying up large amounts of capital, and it is key to the government’s assumption that it can ramp up the three-year scheme quickly, according to Homes and Communities Agency acting chief executive Richard Hill.

In particular, smaller housebuilders, which have been put off participating in the previous incarnation of the scheme by the equity requirement, may be big beneficiaries. “We’re very keen to make sure this works for smaller housebuilders,” says Hill, “and we’ve asked the HomeBuy agents [the scheme’s government-appointed administrators] to do a bit more to help smaller developers with the administrative cost.” He adds that a competition for the new scheme is scheduled for “early April”.

Roger Humber, strategic policy adviser to the House Builders Association (HBA), which represents smaller builders, says that removing the deposit requirement was “very positive” but that without significant help on dealing with the bureaucracy the government could end up struggling to hit its target of 75,000 sales in three years. He says: “Given that this is supposed to come in within weeks, I’m worried they won’t have time to simplify the scheme.”

The second part of Osborne’s Help to Buy announcement - supporting purchasers through mortgage guarantees - should prompt the construction of more homes by increasing demand. So that should be more good news.

But will housebuilders be willing and able to meet that demand? The IFS’ Adam says this isn’t necessarily the case. “This is an industry where most of the problems are seen to be on the supply side, not the demand side. The question to ask is: if demand increases, can housebuilders get planning permission, or credit? Or will they just land-bank rather than expand?”

Professor Duncan MacLennan, director of the University of St Andrews’ Centre for Housing Research and a former housing adviser to both the Scottish and Canadian governments, argues that such demand-side measures are particularly ineffective when it comes to stimulating housebuilding, estimating that two-thirds of the mortgages that the guarantees will back would have been granted anyway. “It’s a poorly designed policy. With limited money you have to think how to get most impact - and for this level of expenditure you could have had a much bigger impact on building.”

Noble Francis, economics director at the Construction Products Association, says that the government is reduced to implementing demand-side measures largely because of the stranglehold that a small number of housebuilders have on the means of producing new homes. He says: “There is little incentive for private housebuilders to significantly increase capacity now and make use of their land banks. They control the majority of the housebuilding market.”

Beware of the bubble

One potential problem worrying economists is that by subsidising demand from homebuyers, you stoke house price inflation. Both parts of the Help to Buy scheme give the government a financial interest in ensuring that prices continue to grow. And regardless of the effects that this might have on the wider economy, soaring house prices are not necessarily good for housebuilders. Although they can deliver super-profits to builders that already own land, they don’t always have much impact on the number of homes built. As the IFS’ Adam puts it, rising prices “just pump money into the system”.

St Andrews’ MacLennan explains: “Ultimately, the higher the house prices, the fewer people that can afford to buy. That means that the same or fewer homes get built, meaning less employment in the sector.”

Certainly there is much to be clarified, including the fee to be charged for the guarantees, which could put off lenders and consumers if too high. But if the policies are successful, economists are clear they will raise house prices, and possibly fuel another “sub-prime” bubble, as those gaining mortgages will be less financially secure than those able to buy on the open market. “This choice of policy looks to be about political ideology rather than economic efficiency,” says MacLennan. “It is as if the government has learned nothing from the experience of the last 10 years.”

For an industry that has been through a torrid five-year bust, there’s a danger that another cycle is just about to start.

Certainly there is much to be clarified, including the fee to be charged for the guarantees, which could put off lenders and consumers if too high. Then there is the slow performance of the existing product for new homes, NewBuy, which generated only 3,700 sales in its first year, against initial estimates of more than 25,000 a year. On that basis, as the HBA’s Humber points out, at least the inflationary impact of mortgage guarantees will be quite small.

Hence the Home Builders Federation’s “guarded” welcome for the package, despite the obvious benefits to its members, particularly of the equity loan initiative.

Mortgage guarantee: Government to make available up to £12bn of government guarantees, sufﬁcient to support £130bn of mortgages for house buyers with a 5%-20% deposit.

The Office of National Statistics (ONS) posted a letter to chancellor George Osborne in the run-up to last week’s Budget, which may have appeared to outsiders simply to be a clarification of an arcane point of accounting methodology around housing investment. But it could end up having more influence on the housebuilding sector than all of the lobbying of the industry put together.

The letter, written in response to lobbying by the Treasury, made clear that the government’s investment in equity loans should in future not be counted against its public sector borrowing. From being classified as a “capital transfer” - on the balance sheet - it became a “financial transaction” - which can go below the bottom line of the UK’s accounts, and doesn’t hit the annual deficit.

Before the change of heart by the ONS, the two tranches of the government’s FirstBuy scheme had been worth £180m in the 2011 Budget and £280m in last year’s Autumn Statement. Last week’s announcement was worth £3.5bn. A Treasury spokesperson said: “It is not the reclassification that has allowed us to do it. It’s a conscious policy decision to help construction and homebuyers.”