How is that possible?: Beijing’s CCTV Tower 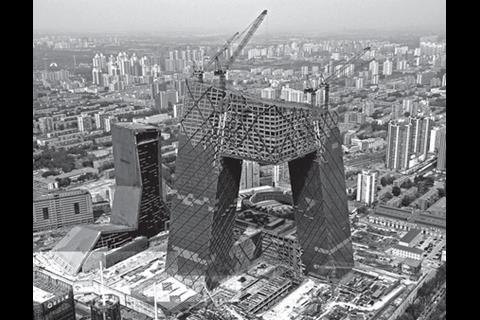 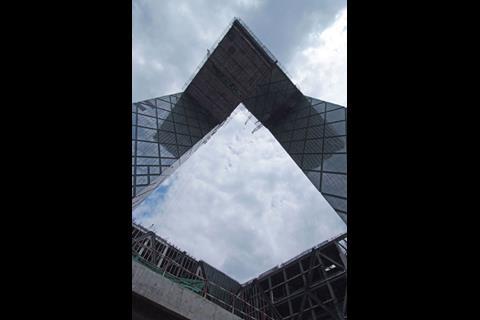 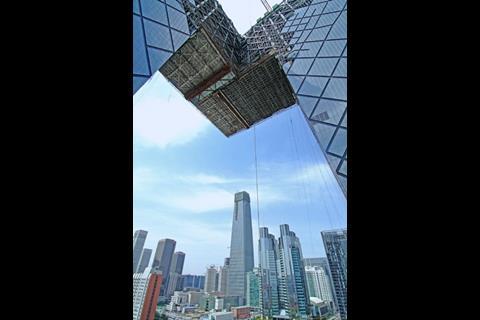 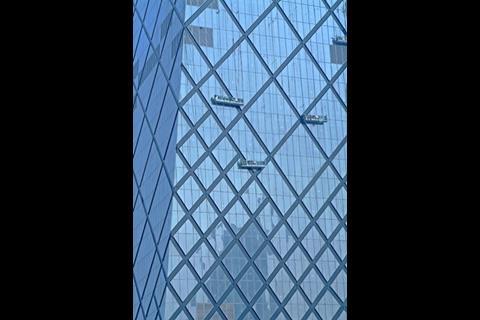 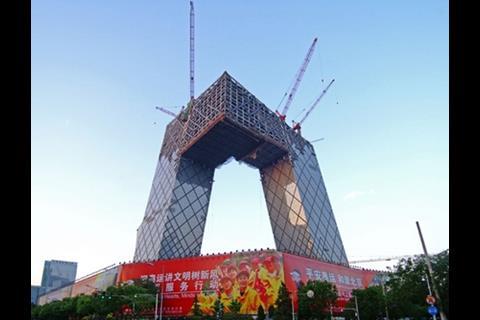 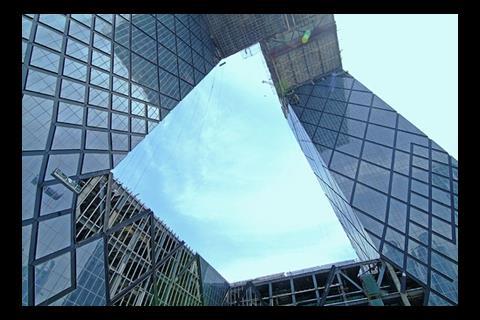 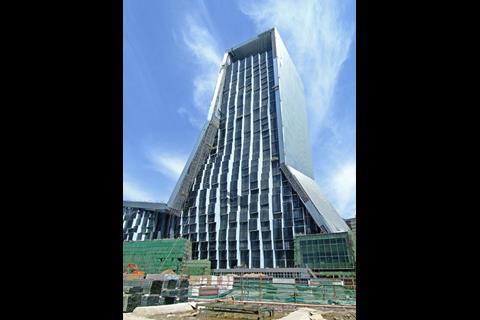 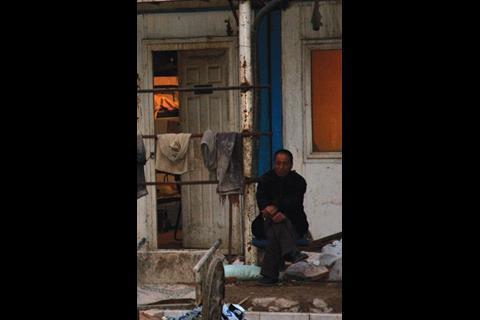 Arup and OMA’s gravity-defying overhang on China’s television headquarters had to be joined without the legs toppling over.

Dawn on Boxing Day last year, 200m above a frosty Beijing and everyone is holding their breath. Not because of the cold, but because if the engineer’s calculations are wrong by even a fraction, this crucial moment in the construction of a $780m (£390m) steel behemoth will prove very, very costly.

The two angular legs of the instant icon are about to be joined together. Years of planning and 130,000 tonnes of steel all come down to this one moment.

The engineer in question is Rory McGowan, a director of Arup’s Beijing office and the man charged with bringing Office of Metropolitan Architects’ (OMA) arresting vision to life. McGowan came to Beijing six years ago and since then the work to build what he describes as “a world-class engineering project – there are no two ways about it” has been his life. So was he worried? Not a bit of it.

“The [computer] model we had built was very close to what actually happened. It was a few millimetres out but we were easily able to adjust for this,” he says, ducking past a mountain of jutting steel at the base of the taller of the two tilted towers. “I was confident this would be fine as we had spent months planning for and modelling it.”

And how. According to McGowan, once Rem Koolhaas’ OMA and Arup had been selected by China Central Television (CCTV) to build its 470,800m2 home, they spent 18 months working out how on earth to build something that seemed to defy gravity so entirely. For starters there were no rules – nobody had tried anything like this anywhere before.

“We had to engineer from first principles, which was very exciting. There was no code for what we were doing,” says McGowan as we cram into a dusty hoist and clank our way up to the 38th floor. “We had to plan it exclusively for CCTV. This included design criteria, material properties and what construction programmes to use. Arup brought in best practice from all over the world.”

McGowan, OMA and East China Architectural Design and Reseach Institute, which did the detailed design, came up with a solution based on the distinctive, irregular lattice that encases the building in enormous triangles (even the smallest ones are four storeys high).

This approach has resulted in an eye-pleasing skeleton that softens what would otherwise be a brutal cranked block. The cantilever effect, which relies on the weight of the ground section of this intricate, looped structure, is clever on paper but, crucially, it looks it as well. Koolhaas jumped at the chance of allowing the latticed skeleton to trace its path on the skin of the building.

For McGowan, the key part of the project was to convince the expert panel assembled by the Beijing authorities to oversee construction that the design would stand up. “We found the committee to be very thorough and appropriate. The Chinese were open to persuasion despite having their own bottom lines,” he says. The answer, in January 2004, was yes – “when that came through that was a huge relief” – and the race by contractor China State Construction Engineering Corporation (CSCEC) to get the CCTV tower built in time to broadcast the Beijing Games was on.

We had to engineer from first principles which was very exciting. There was no existing code for what we were doing

But on 23 May 2004, before CSCEC could get on site, disaster struck 5,000 miles away. Terminal 2E at Paris Charles de Gaulle airport partially collapsed less than a year after being completed and killed four people. This panicked the Beijing authorities, because the terminal’s designer was Paul Andreu of airport operator ADP and he had also designed the £254m Grand National Theatre in the city. Construction of this and all other foreign-designed buildings in the capital was halted while every plan was scrutinised to verify safety and costs – including the CCTV project. “Changes were made to other projects,” says McGowan, “but thankfully this one was left alone.” It did mean, however, that the tower would not be finished in time for images from the country’s Olympic venues to be broadcast from its landmark TV headquarters.

When work finally did begin in September 2004, Du Xin Ming, CSCEC’s deputy general manager on the project, took this as his cue to notch up a series of firsts for his company, which is the largest contractor in China. “We’ve never done anything like this before,” he says when we meet in his site office, the walls of which are lined with shots of the CCTV tower at stages of its 27-month growth. “When we did the basement foundation we set a record for the longest-ever concrete pour in China – 300,000m3 in 56 hours.” Du also cites the “longest ever weld” at more than 14m and the “heaviest crane climb” as he describes how CSCEC at one stage built six floors a month. When they hit the 16th floor, the mammoth task of installing the glass cladding began.

Du and the site workers constructing the three buildings that make up the CCTV complex – it is rumoured that the structures spell out the architect’s name “OMA” – were racing along at six floors a month. But completing the project in time for August 2008 was always unlikely. The expected completion date is now December 2009 – almost a year and a half after the Games begin.

“There will be 4,000 workers on site at the time of the fit-out,” says Du. “Are we going to hit the finish date next year? The structure is on schedule but in the fitting-out stage it will be a little behind. This is out of our control as everything has been subcontracted through the client rather than us.”

As if this weren’t enough, there is further pressure on Du to finish the cladding on the overhang by the end of the month so that gawping Olympic tourists in Beijing will have the best possible snaps for their albums. He says: “We’ve got 1,200 workers on site at the moment. The government wants us to make sure that we finish the overhang corner for the Olympics. We think that we will be able to finish the whole of the curtain walling by then but it will be very tight.”

Something else that is reportedly tight is the cost. Reports of just how much the final bill will be have varied wildly from $400m (£200m) to $700m (£350m). Jeff Liu, general manager of Atkins in Beijing, says: “The design of the CCTV tower is very special. The construction of it has been a big challenge and a great achievement. But the costs have been huge – much more than planned.” The outturn cost of the main tower and the hotel is expected to be $1bn (£500m).

Before the drama of that early December morning last year, there was one final step that McGowan and his team had to negotiate: how do you build the overhang without the towers buckling under the strain before they are joined? It had been decided with CSCEC and the expert panel that the best way to do it would be to build out from each tower, rather than constructing a supporting third tower or lift a frame from the ground. Arup’s engineers had spent weeks pondering this, as the computer model showed that, no matter how they strengthened four key corner components, they would not withstand the load created by hanging hundreds of tonnes of steel from the edge of each tower. Then McGowan tried something different. “We simply took out four key corner columns before we built out to join the two towers,” he says. “It was completely counter-intuitive – but this meant that because of the triangulated nature of the building, it was able to find other ways to distribute the load and ended up doing it more evenly.”

The theory may have worked but the moment when the two towers were joined still had to be absolutely precise. McGowan had demanded that the contractor simulate the joining the day before at the same time to check the temperature of the two towers, and the wind speed. “The connection had to be made when it wasn’t windy. There also needed to be a uniform temperature so that one side of the building wasn’t out of kilter with the other depending on which had had more sun that day. So it had to be done at dawn.” But done it was, with the seven sliding bolts connecting the structures inserted in half an hour.

Not that everyone is impressed. Paul Rice, associate director at Atkins’ Shanghai office, says: “It creates an unnecessary problem and then solves it using a heck of a lot of steel. I find this very hard to justify.”

But for McGowan it represents “the crowning achievement of my career … the CCTV building is one continuous twisted tube. This takes all of the strain – the core doesn’t do anything apart from deal with gravity. The idea is that we redefine the idea of a tall building. Everyone is obsessed with going up – with this you can go around.”